Eat your heart out Fish-o-Mania XXII… Twenty one anglers who successfully negotiated the semi final stages lined up to take part in the 39th Green Un Final and it proved to be a tense affair. Things started well with everyone catching at the start then after the two hours Little Grebe Lake inexplicably simply switched off. 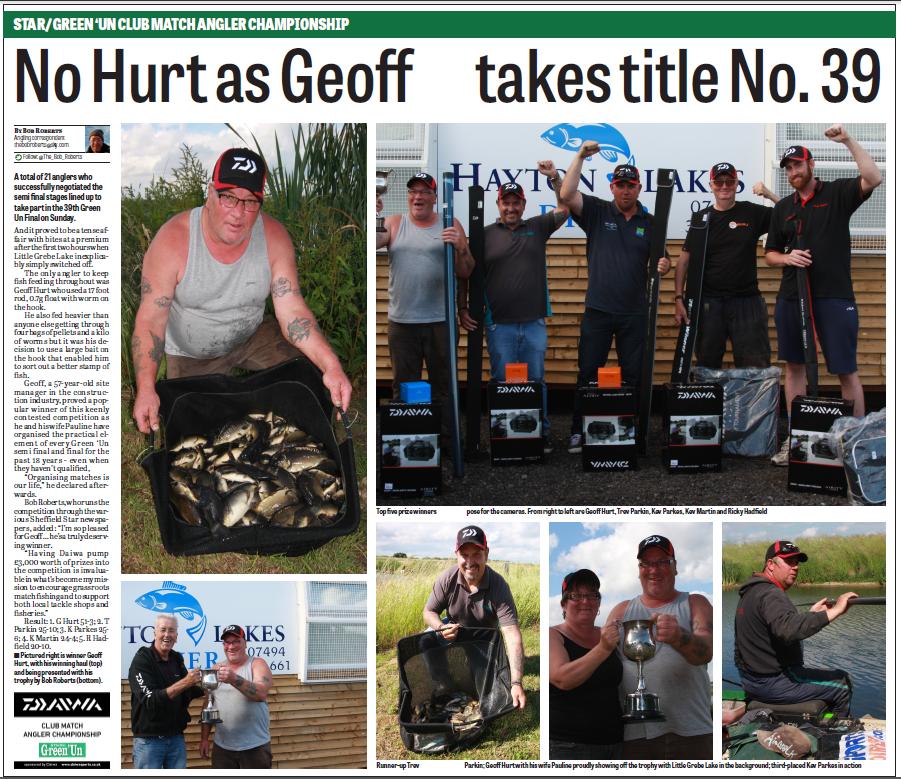 The only angler to keep fish feeding throughout was Geoff Hurt who used a 17 foot rod, 0.7g float with worm on the hook. He also fed heavier than anyone else getting through 4 bags of pellets and a kilo of worms but it was his decision to use a large bait on the hook that enabled him to sort out a better stamp of fish.

Geoff, 57, a site manager in the construction industry, proved a popular winner of this keenly contested competition as he and his wife Pauline have organised the practical element of every Green Un semi final and final for the past 18 years even when they haven’t qualified, ‘Organising matches is our life!’ he declared afterwards.

‘I’m so pleased for Geoff, he’s a truly deserving winner.’ Said Bob Roberts, who runs the competition through the various Sheffield Star newspapers. ‘Having Daiwa pump £3,000 worth of prizes into the competition is invaluable in what’s become my mission to encourage grass roots match fishing and to support both local tackle shops and fisheries.

Stop Press: ‘I am pleased to announce that Daiwa Sports will be supporting the Star/ Green Un Club Match Angler Championship again in 2015/16 when the competition will achieve a significant milestone – its 40th consecutive year.’ Bob Roberts

The Green Un Championship is open to any angling club in the Sheffield Star circulation area which more or less covers Sheffield, Chesterfield, Rotherham, Doncaster and Barnsley. Entry is completely free. Just ask your match secretary to email your club’s results to: greenun@sky.com

Please use the same email address to ask for an entry form.