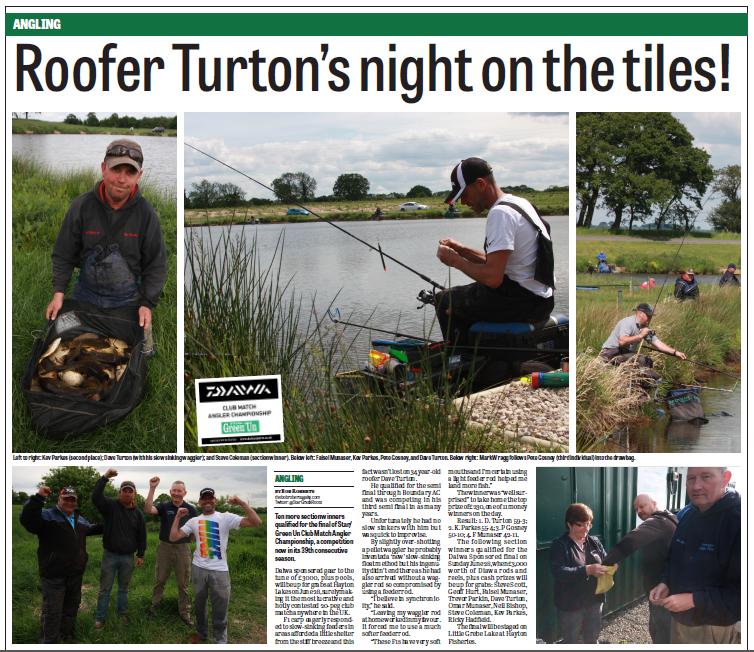 Ten more section winners qualified for the final of Star/Green Un Club Match Angler Championship, a competition now in its 39th consecutive season.  Daiwa sponsored gear to the tune of £3000, plus pools, will be up-for-grabs at Hayton Lakes on June 28th, surely making it the most lucrative and hotly contested 20-peg club match anywhere in the UK. F1 carp eagerly responded to slow-sinking feeders in areas afforded a little shelter from the stiff breeze and this fact wasn’t lost on 34 year-old roofer Dave Turton. He qualified for the semi final through Boundary AC and was competing in his third semi final in as many years. Unfortunately he had no slow sinkers with him but was quick to improvise. By slightly over-shotting a pellet waggler he probably invented a ‘new’ slow-sinking float method but his ingenuity didn’t end there as he had also arrived without a waggler rod so compromised by using a feeder rod. ‘I believe in synchronicity,’ He said. ‘Leaving my waggler rod at home worked in my favour. It forced me to use a much softer feeder rod. These F1s have very soft mouths and I’m certain using a light feeder rod helped me land more fish.’ The winner was ‘Well surprised’ to take home the top prize of £230, one of 11 money winners on the day. Result: 1. D. Turton 59-3; 2. K. Parkes 55-4; 3. P Gosney 50-10; 4. F Munaser 42-11. The following section winners qualified for the Daiwa Sponsored final on Sunday 28th June when £3,000 worth of Diawa rods and reels, plus cash prizes will be up for grabs: Steve Scott Geoff Hurt Faisel Munaser Trevor Parkin Dave Turton Omar Munaser Neil Bishop Steve Coleman Kev Parkes Ricky Hadfield Final venue: Little Grebe Lake at  Hayton Fisheries on Sunday 28th June, 2015