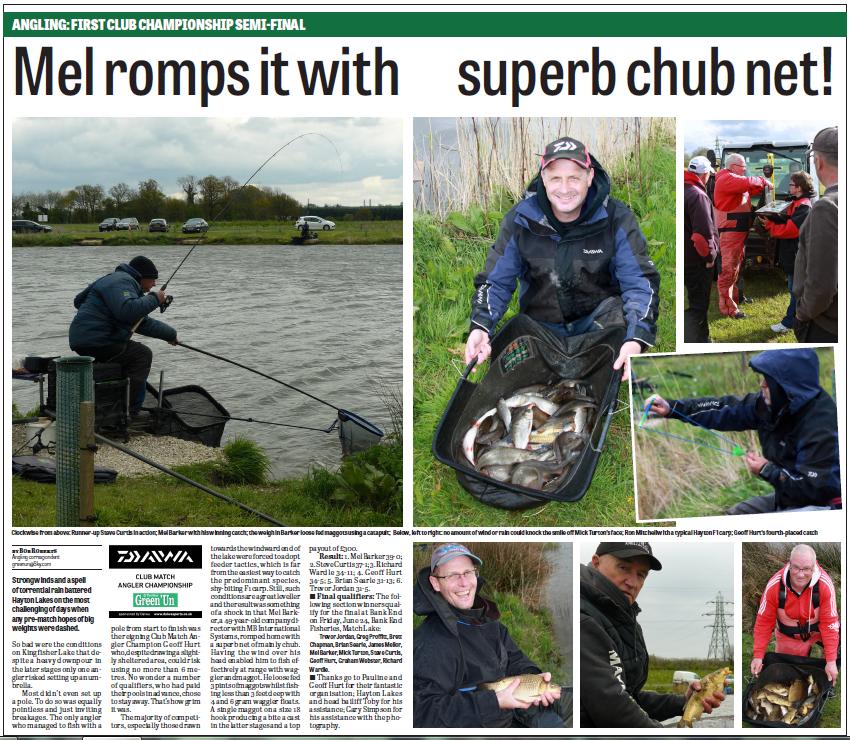 Strong winds and a spell of torrential rain battered Hayton Lakes on the most challenging of days when any pre-match hopes of big weights were dashed. So bad were the conditions that despite a heavy downpour in the later stages only one angler risked setting up an umbrella.

Most didn’t even set up a pole. To do so was equally pointless and just inviting breakages. The only angler who managed to fish with a pole from start to finish was the reigning Club Match Angler Champion Geoff Hurt who, despite drawing a slightly sheltered area, could risk using no more than 6 metres. No wonder a number of qualifiers, who had paid their pools in advance, chose to stay away. That’s how grim it was.

The majority of competitors, especially those drawn towards the windward end of the lake were forced to adopt feeder tactics, which is far from the easiest way to catch the predominant species, shy-biting F1 carp. Still, such conditions are a great leveller and the result was something of a shock in that Mel Barker, a 49-year-old company director with MB International Systems, romped home with a superb net of mainly chub. Having the wind over his head enabled him to fish effectively at range with waggler and maggot. He loose fed 3 pints of maggots whilst fishing less than 3 feet deep with 4 and 6 gram waggler floats. A single maggot on a size 18 hook producing a bite a cast in the latter stages and a top payout of £300.

The following section winners qualify for the final at Bank End on (date):