Outside of Hampshire and Dorset very few anglers have ever seen a truly big grayling. They really are quite rare. Even a two-pounder is rare outside of the Southern chalk streams and perhaps the Tweed in the Scottish borders. I live in Yorkshire and there are plenty of places to catch grayling but anything over 12oz is heading up into specimen territory. 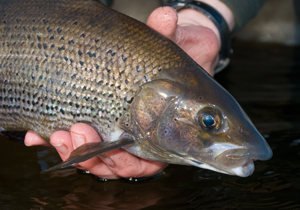 Read the weekly papers and it’s obvious that Dorset’s the place to be, where grayling appear to be born weighing 1lb 8oz and three-pounders are practically common, but how many of those fish we see in the Times and Mail are just repeat captures of the same old fish? I could have said, ‘by the same old anglers’ had I been feeling less charitable.

I can’t shake off a feeling that the world of ‘our lady’ is hopelessly distorted and as a result they are generally derided. Consequently folk are losing that desire to go out and try for them because size matters more than enjoyment these days which in turn means there’s some fabulous fishing waiting to be enjoyed if you claw those scales from your eyes and just enjoy what is staring you in the face. 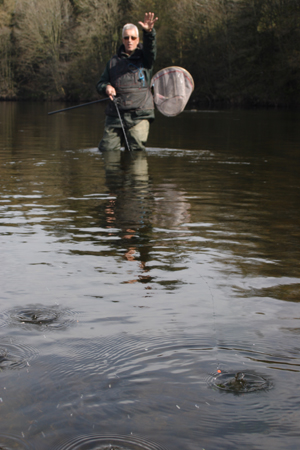 We stayed in a quaint little town called Loch Maben, fishing the Annan on Saturday, Castle Loch on Sunday and this young lad had never fished in such wild, spectacular scenery before. Or anywhere that was quite so wet… 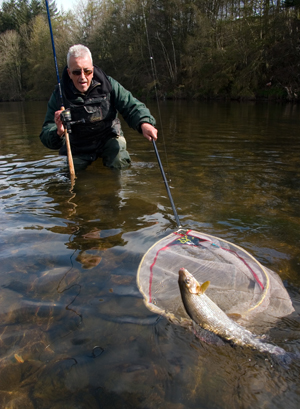 The grayling advert sparked a burning desire within, so I contacted the guide, Chris Bowman, and booked a session with him. As a full-time angling guide Chris is part of a fairly rare breed in the UK. In the United States professional guides are a dime a dozen. From Alaska to Florida, San Francisco to Boston, there are guides in practically every town be it for bass, trout, salmon or any other species you care to mention; US anglers are happy to pay for expert tuition. In the UK we’re a little sceptical of someone who purports to be an expert in anything. I watch my local football team when I get a chance, but all the experts appear to be in the stands, or posting on the Internet forums.

Perhaps the average UK angler thinks he’s too good to be taught anything or maybe we’re just tight. But remember this when you’re slaving away at your day job. Your leisure time is invariably limited and extremely precious because even those days off work get sacrificed for decorating and gardening, for shopping and getting stuck in traffic jams. Just sit and think sometime how much genuine quality leisure time you actually get to do exactly what you want. How many hours did you spend in the past year, with a rod in your hand, and actually felt in tune with the environment, felt that you might reap the rewards of your efforts in the next few minutes. You see, even when we do go fishing so much of the time is spent in the wrong swims, using the wrong tactics and generally making a hash of things.

It’s scary if you really analyse your wasted fishing times and these are hours you’ll never get back. A day or two with a good guide can prove a really wise investment and, thanks to the efforts of the PAA, can be found  all over the country these days. Chris is just one of them.

Of course, if you think you’re too proficient to need coaching, maybe you might consider asking why professional tennis players and cricketers, footballers and golfers all rely on coaches if they want to perform at their peak. It does make sense you know and it needn’t cost the earth.

It can also introduce you to new fisheries. 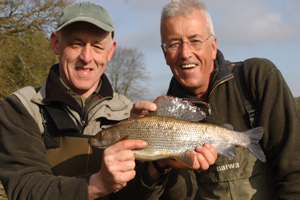 Matt Brown and I met up with Chris near Kirkwood where the Annan is simply majestic. Wide, wild, swift and unfortunately crystal clear; oh, how we could have used a drop of colour in the water. Frost hung from the trees, snow capped the hills but a weak sun seemed determined to break through. Eagles soared high in the heavens above and it didn’t seem to matter that we were going to struggle.

Best of all we were able to drive right to the river and we had the entire beat to ourselves which meant we could roam around casting here and there as the fancy took us.

This stretch of the Annan has produced numerous ‘threes’. Rumours even circulate of the occasional ‘four’ – record shakers. But as Sod’s Law would have it, we were destined to struggle. We leapfrogged, eager to explore every crease, pool and glide, to the point where Matt and I were practically racing each other to reach the next great looking spot and there were plenty of those.

It was a case of hit and run, feed a few maggots, run a loafer through a dozen times or so and if nothing materialised, move on. I’d be lying if I said the fishing wasn’t hard. It was painfully hard. But we still caught our share of fish, although we did have to work for them. Come the afternoon of day one it was clear Matt had his eye on a particularly tasty looking swim. It turns out the swim has a bit of history – or should I say a lot of history.

In 1955 the British chub record was smashed by Dr J. A. Cameron from this very swim whilst fishing at night for sea trout. The fish was claimed to weigh 10lb 8oz although it was subsequently removed from the list through a lack of evidence. 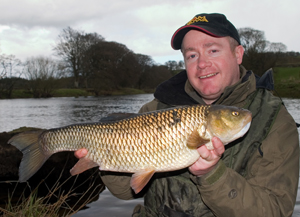 Sure enough, Matt hooked into a chub, a chunky thing weighing 5lb 9oz. That’s a hell of a fish when you consider the current Scottish record is only 6lb 2oz.

The day flew by but we failed to make any headway with bigger fish, but it was fun. We ended the day sharing a swim in a pool below a fast glide, fishing quiver tips and taking a steady run of nice fish to more than a pound.

We’d booked a room for the night in the Crown Hotel in Loch Maben. Cheap and cheerful it certainly was with breakfast thrown in for £26 but be warned, you’ll struggle to find anywhere serving food in this part of the world after 7pm. Fortunately the barmaid took pity and knocked us up a cheese and ham sandwich. We sat there supping a fine pint of ale watching a football match on the TV that was taking place less than ten miles from my home, which was indeed quite surreal, before hitting the sack.

Next morning we rose and looked out of the window. It was dark when we arrived at the pub so we saw nothing of the scenery but the view in daylight was amazing as before us lay the wild expanses of Castle Loch, arguably Scotland’s premier coarse fishery. It contains specimen pike, bream, roach, perch, tench and even carp. Certainly a venue I’d like to explore one day. But we had our grayling heads on so we headed back to the Annan straight after breakfast. 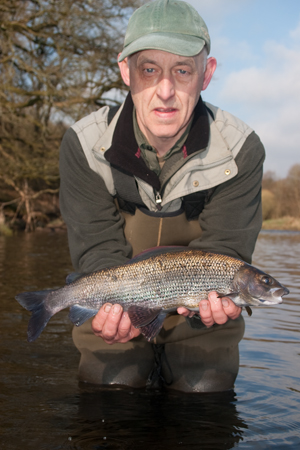 It was Chris who struck gold with a cracking grayling on corn that went 2lb 5oz. Perhaps today was going to be more fruitful. A fish like that fires everyone up but the sun soon broke through and we could see every single pebble on the river bed. Today would be no easier than yesterday.

We’d have caught more fish on the feeder, I’m sure, but there’s a magic about trotting for grayling, isn’t there? So we thrashed the water to foam, tried a different stretch and all to no avail. Yes, we caught fish, but you couldn’t string two together. The river was not going to give up its treasures quite as easily as we had hoped but that just means we’ll have to return and try again. And that won’t be a hardship, I can tell you.

Of course, not everyone is quite as adventurous as we are, but fear not. If you would like to enjoy the splendour of grayling fishing in exquisite surroundings and be guided throughout by qualified angling coaches, why not consider joining one of Chris’s Grayling Schools?

Run in conjunction with fly fishing expert Glyn Freeman and Antony Steel, you can have four days fishing staying three nights in a 2 or 3 star cottage close by the river. You will be accompanied at all times for either group or one-to-one tuition. You will have your own bedroom but will share the cottage. All meals (breakfast, packed lunch and evening meal) are included, as is the fishing, accommodation, guidance and tuition. Drinks are about the only thing not included. The emphasis is on fishing hard, putting into practice the knowledge gleaned from the evening talks & tuition sessions.

The “Grayling school” will be tailored to suit your level of experience be that novice or specialist but places are limited. Chris will provide pupils with a suggested equipment list but if you are short of anything it can be hired. For more details please give Chris a call on 07714 168939. You may email him on chris.bow.fish.man@tinyworld.co.uk or check out the grayling school web site. Further details can be gleaned from the Borderline web site.

Update: Chris emailed me today (24 Jan, 2011) to say “I have been on the Eden today with a young lad and his boss, the lad had a brace of 2lb grayling, the best weighing 2lb 1oz. The Eden has been fishing really well for grayling this winter. I have had two fish at 2lb 9oz and in one short session I landed 5 fish of 2lb 7oz, 2lb 1oz,  2lb, 2lb 9oz, and the smallest at 1lb 15oz. But what a fantastic mornings sport.

I think I shall be having myself a bot of that when I get a chance!

One thought on “Annan Other Thing…”