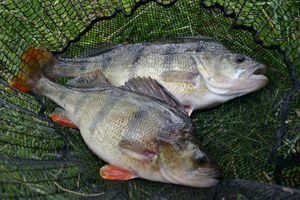 During the final weeks of the season it is probably easier to catch a big river perch than at any other time. Why? Because location is easier and feeding times are predictable.

Big perch are nomadic in summer, as eager to swim in the fastest current as haunt the deepest eddy as they seek out shoals of prey fish. In winter they will invariably be found in quieter water and this means swim choice is much easier.

If you can find an area of steady water below a bend with features like rushes, overhanging bushes or better still a fallen tree branch, chances are a big perch will be nearby. Ignore the swirling eddies, seek out areas where the flow is sedate close-in and picking up pace as you work a little further out. Depth isn’t too important. I’ve caught big perch in less than a couple of feet of water from right next to the margin rushes but four to eight feet is better.

Big perch tend to shoal in swims like this and whereas you may need to adopt a mobile approach in summer, taking a fish here and a fish there, multiple catches of big perch may be taken from one swim in winter.

Unlike many river species, perch don’t appear to like coloured water. When levels are high and the river is carrying sediment I suspect their gills become irritated and they can be near impossible to tempt, which is strange in some ways because experience shows that winter perch are more likely to be caught during the last hour of daylight or on those gloomy, dull days when it never really gets light.

One reason why the same old anglers catch really big perch in winter is because they are the only ones who are determined and sit it out until the magic hour. I’ve lost count of the times that I’ve sat with a dry net until late afternoon watched the feint hearted pack up and leave, one-by-one

Sometimes the final car has hardly left the car park before I bend into my first lump of the day.

It’s not easy to stick it out on bitter cold days, especially when you’ve been on the river since daybreak, and that’s why I normally have a lie-in on the days when I target winter perch. There is little point in rising early and thrashing the water to foam only to lose interest when you need to be completely focussed.

Big summer perch are invariably predatorial but that tends to change in winter. They become far more omnivorous and will readily take maggots and worms. If I’m restricted to just one bait at this stage of the season I will plump for worms every time. Lob worms are perfect should you intend to leger or lay-on with a float, but it’s not easy to search around a steady swim with a lobby unless you use a fairly hefty float. It’s much easier to use a decent sized dendrabaena on the hook and work the whole swim, searching for that illusive pocket of fish.

Float fishing allows you to impart movement of the bait in a way that is simply not possible with a leger. I never just cast out and let the float swing round. Instead I keep working it, lifting the worm six inches and allowing it to flutter down enticingly, drawing it back towards me in jerky pulls, inching the bait sideways and constantly altering depths from hard on the bottom to just off.

Although my main feed will be chopped worm with a few casters, introduced a little way short of the crease, I’ll work the whole swim with my float, anywhere from underneath my feet, alongside any nearside features and out to the point where the main current kicks in. Sometimes

I’ll trot at the full speed of the current and then slowly edge the bait back towards me along the margin.

The key to success is to keep searching, to work hard and not lose heart. On a gloomy afternoon last March, Archie Braddock and I sat no more than ten yards apart on the Derbyshire Derwent and shared a catch of five perch. We pulled out of a couple more and also had a couple of double figure pike, all on float fished worms. Those five perch weighed over fourteen pounds between them and included three over the magical three-pound barrier.

Stick it out to the bitter end and you could well be rewarded with a personal best perch.

1. Make sure everything is prepared, have spare hooks tied and ready as you approach the magic hour
2. Step up the hook link and hook size if there are serious snags about
3. Keep working the bait because you can provoke a perch into snapping at it.
4. Search the whole swim until you locate a fish and then concentrate on the area
5. Big perch are deceptively powerful and the swims you need to fish can be quite snaggy. I regard 3lb hooklinks as the absolute minimum and will frequently fish with 5lb line straight through to the hook.