The weather outside was frightful but that didn’t stop Bob Roberts from going fishing. Here’s how he described his exploits in the January issue of Improve Your Coarse Fishing, 2011… 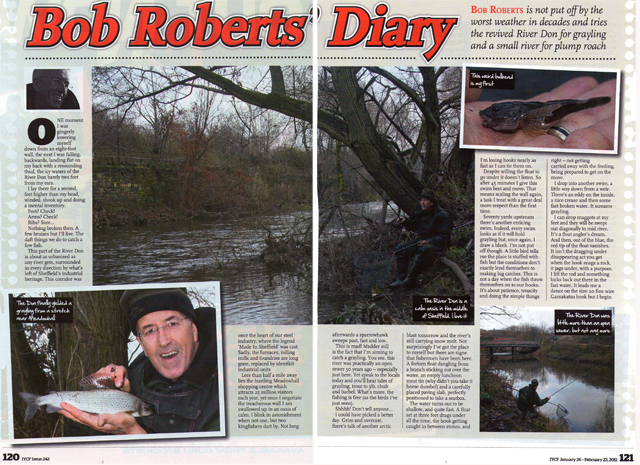 One moment I was gingerly lowering myself down from an 8-foot high wall, the next I was falling, backwards, landing flat on my back with a resounding thud, the icy waters of the River Don barely two feet from my ears. I lay there for a second, feet higher than my head, winded, shook up and doing a mental inventory.

Nothing broken then. A few bruises but I’ll live.

The daft things we do to catch fish. 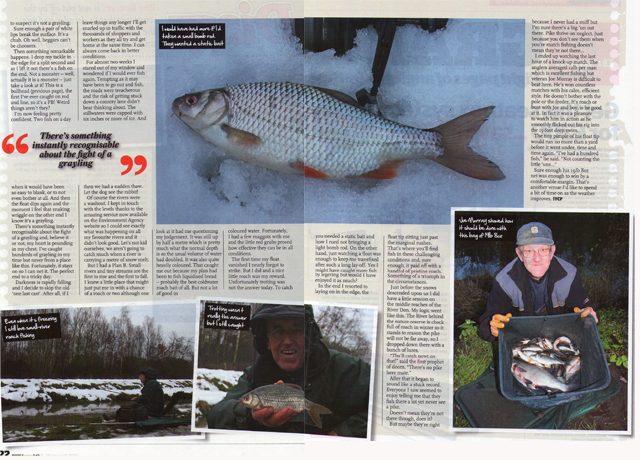 This part of the River Don is about as urbanised as any river gets, surrounded in every direction by what’s left of Sheffield’s industrial heritage. This corridor was once the heart of our steel industry, it’s where the legend ‘Made In Sheffield’ was cast. Sadly the furnaces, rolling mills and foundries are long gone, replaced by identikit industrial units. Less than half a mile away lies the bustling Meadowhall shopping centre which attracts 25 million visitors each year, yet once I negotiate the treacherous wall I am swallowed up in an oasis of calm. I blink in astonishment when not one, but two kingfishers dart by. Not long afterwards a sparrow hawk sweeps past, flying fast and low.

This is mad! Madder still is the fact that I’m aiming to catch a grayling. You see this river was practically an open sewer 30 years ago – especially just here. Yet speak to the locals today and you’ll hear tales of grayling, trout to 3lb, chub and barbel. What’s more, the fishing is free (as the birds I’ve just seen).

I could have picked a better day. Grim and overcast, there’s talk of another arctic blast tomorrow and the river’s still carrying snow melt. Not surprisingly I’ve got the place to myself but there are signs that fishermen have been here. A forlorn float dangling from a branch sticking out over the water, an empty luncheon meat tin and a carefully placed paving slab, perfectly positioned to take a seat box.

The water turns out to be shallow, and quite fast. A float set at three feet drags under all the time, the hook getting caught in between stones and I’m losing hooks nearly as fast as I can tie them on.

Despite willing the float to go under it doesn’t listen. So after 45 minutes I give this swim best and move. That means scaling the wall again, a task I treat with a great deal more respect than the first time.

Seventy yards upstream there’s another enticing swim. Indeed every swim looks as if it will hold grayling but once again I draw a blank. I’m not put off though. A little bird tells me the place is stuffed with fish but the conditions don’t exactly lend themselves to making big catches. This is not a day when the fish throw themselves onto our hooks. It’s about patience, tenacity and doing the simple things right; not getting carried away with the feeding, being prepared to stay on the move.

I drop into another swim, a little way down from a weir. There’s an eddy on the inside, a nice crease and then some fast broken water. It screams grayling. 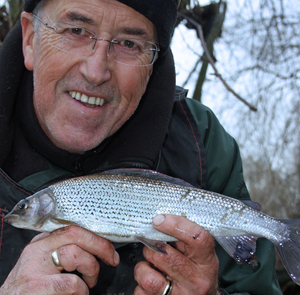 I can drop maggots at my feet and they will be swept out diagonally to mid river. It’s a float anglers dream. And then, out of the blue, the red tip of the float vanishes. It isn’t the dragging under disappearing act you get when the hook snags a rock, it jags under, with a purpose. I lift the rod and something kicks back out there in the fast water. It leads me a dance on the size 20 fine wire Gamakatsu hook but I begin to suspect it’s not a grayling. Sure enough a pair of white lips break the surface. It’s a chub. Oh well, beggars can’t be choosers.

Then something remarkable happens. I drop my tackle in the edge for a split second and as I lift it out there’s a fish on the end. Not a monster – well, actually it is a monster – just take a look at it! This is a bullhead, the first I’ve ever caught on rod and line, so it’s a PB! Weird things aren’t they?

I’m now feeling pretty confident. Two fish on a day when it would have been so easy to blank, or to not even bother at all. And then the float dips again and the moment I feel that snaking wriggle on the other end I know it’s a grayling. There’s something instantly recognisable about the fight of a grayling and believe it or not my heart is pounding in my chest. I’ve caught hundreds of grayling in my time but never from a place like this. Fortunately it stays on so I can net it. The perfect end to a tricky day.

Darkness is rapidly falling and I decide to skip the old ‘one last cast’. After all, if I leave things any longer I’ll get snarled up in traffic with the thousands of shoppers and workers as they all try and get home at the same time. I can always come back in better conditions.

For almost two weeks I stared out of my window and wondered if I would ever fish again. Tempting as it may have been to go out and fish the roads were treacherous and the risk of getting stuck down a country lane didn’t bear thinking about. The stillwaters were capped with 6 inches or more of ice. And then we had a sudden thaw. Let the dog see the rabbit!

Of course the rivers were a washout. I kept in touch with the levels thanks to the amazing service now available on the Environment Agency web site so I could see exactly what was happening on all my favourite rivers and it didn’t look good. Let’s not kid ourselves, we aren’t going to catch much when a river is carrying a metre of fresh snow melt. 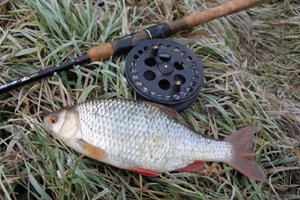 But I had a Plan B. Small rivers and tiny stream are the first to rise and the first to fall. I knew a little place that might just put me in with a chance of a roach or two although one look at it had me questioning my judgement. It was still up by half a metre which is pretty much what the normal depth is so the normal volume of water had doubled. It was also quite heavily coloured.

That caught me out because my plan had been to fish liquidised bread – probably the best cold water roach bait of all. But not a lot of good in coloured water. Fortunately I had a few maggots with me and the little red grubs proved how effective they can be in all conditions.

The first time my float vanished I nearly forgot to strike. But I did and a nice little roach was my reward. Unfortunately trotting was not the answer today. To catch you needed a static bait and how I rued not bringing a light bomb rod. On the other hand, just watching a float was enough to keep me transfixed after such a long lay-off. Yes I might have caught more fish by but would I have enjoyed it as much?

In the end I resorted to laying on in the edge, the float tip sitting just past the marginal rushes. That’s where you’ll find fish in these challenging conditions and sure enough it paid off with a handful of pristine roach. Something of a triumph in the circumstances.

Just before the snows descended upon us I did have a little session on the middle reaches of the River Don. My logic went like this. The River behind the nature reserve is chock full of roach in winter so it stands to reason the pike will not be far away, so I dropped down there with a bunch of lures.

“Tha’ll catch nowt on that!” Said the first prophet of doom. “There’s no pike here mate.”

After that It began to sound like a stuck record. Everyone who spotted me seemed to enjoy telling me that they fish there a lot yet never see a pike.

Doesn’t mean they’re not there though, does it? 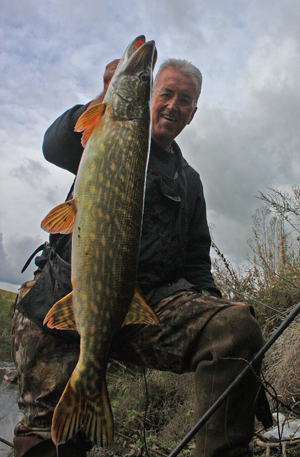 But maybe they’re right because I never had a sniff but I’m sure there’s a big ‘un out there. Pike thrive on neglect. Just because you don’t see them when you’re match fishing doesn’t mean they’re not there…

I ended up watching the last hour of a knock-up match. The anglers averaged 12lb per man which is excellent fishing but the veteran Joe Murray is difficult to beat here. He’s won countless matches with his calm, efficient style. He doesn’t bother with the pole of the feeder. It’s roach or bust with Joe and boy, is he good at it. In fact it was a pleasure to watch him in action as he smoothly flicked out his rig into the 15-foot deep swim.

The tiny pimple of his float tip would run no more than a yard before it went under, time and time again. “I’ve had a hundred fish,” He said, “Not counting the little ’uns…”

Sure enough his 19lb 8oz net was enough to win with a comfortable margin. That’s another venue I’d like to spend a bit of time on as the weather improves.