The pressure was on back in January 2012 as Stu Walker and I immersed ourselves in the filming for Caught In The Act. Here’s how we got on chasing zander and chub… 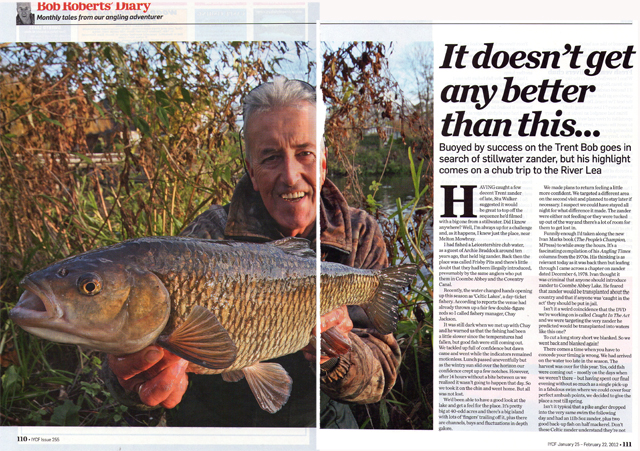 Having caught a few decent Trent zander of late Stu Walker suggested it would be great to top off the sequence he’d filmed with a big one from a stillwater. Did I know anywhere? Well, I’m always up for a challenge and as it happens I knew just the place.

I had fished a Leicestershire club water as a guest of Archie Braddock water around ten years ago that held big zander. Back then the place was called  Frisby Pits and there’s little doubt that they had been illegally introduced, presumably by the same anglers who put them in Coombe Abbey and the Coventry Canal.

Recently the water changed hands, opening up this season as ‘Celtic Lakes’, a day ticket fishery. According to reports it had already thrown up a fair few double figure zeds so I made a call to the fishery manager, Chay Jackson.

It was still dark when we met up with Chay and he warned us that the fishing had been a little slower since the temperatures had fallen and good fish were still coming out. We tackled up full of confidence but dawn came and went while the indicators remained motionless. Lunch passed uneventfully but as the wintery sun slid over the horizon our confidence crept up a few notches. However, after 14 hours without a bite between us we realised it wasn’t going to happen that day. So we took it on the chin and went home. All was not lost. We’d been able to have a good look at the lake and get a feel for the place. It’s pretty big at 40-odd acres and there’s a big island with lots of ‘fingers’ trailing off it, plus there are channels, bays and fluctuations in depth galore. 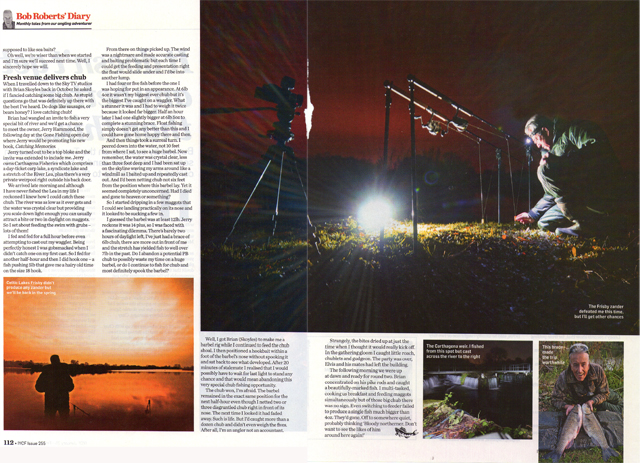 We made plans to return feeling a little more confident. We targeted a different area on the second visit and planned to stay later if necessary. I suspect we could have stayed all night for what difference it made. The zander were either not feeding or they were tucked up somewhere out of the way and there’s a lot of room for them to get lost in.

Funnily enough I’d taken along the new Ivan Marks book (The People’s Champion, MPress) to while away the hours. It’s a fascinating compilation of his Angling Times columns from the 1970’s. His thinking is as relevant today as it was back then but leafing through I came across a chapter on zander dated 6th December,1978. Ivan thought it was criminal that anyone should introduce zander to Coombe Abbey Lake. He feared that zander would be transplanted about the country and that if anyone was ‘caught in the act’ they should be put in jail. 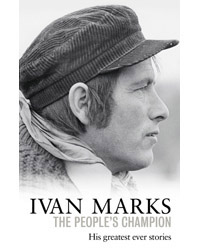 Isn’t it a weird coincidence that the DVD we’re working on is called Caught In The Act and we were targeting the very zander he predicted would be transplanted into waters like this one?

To cut a long story short we blanked. So we went back and blanked again!

There comes a time when you have to concede your timing is wrong. We had arrived on the water too late in the season. The harvest was over for this year. Yes, odd fish were coming out – mostly on the days when we weren’t there – but having spent our final evening without so much as a single pick-up in a fabulous swim were we could cover four perfect ambush points, we decided to give the place a rest till spring.

Isn’t it typical that a pike angler dropped into the very same swim the following day and had an 11-5 zed, plus two good back-up fish on half mackerel. Don’t these Celtic zander understand they’re not supposed to like sea baits?

Oh well, we’re wiser than when we started and I’m sure we’ll succeed next time.

Pie In The Sky

When I travelled down to the Sky TV studios with Brian Skoyles back in October he asked, ‘Did I fancied catching some big chub?’ As stupid questions go that was definitely up there with the best I’ve heard. Do dogs like sausages, or bears honey? I love catching chub!

Brian had wangled an invite to fish a very special bit of river and we’d get a chance to meet the owner, Jerry Hammond, the following day at the Gone Fishing open day where Jerry would be promoting his new book, Catching Memories. 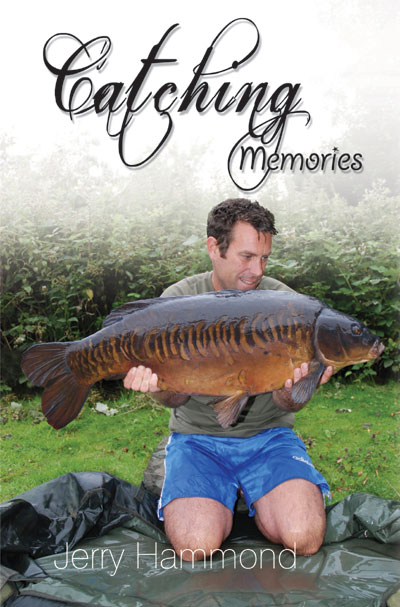 Jerry turned out to be a top bloke and the invite was extended to include me. Jerry owns Carthagena Fisheries which comprise a day ticket carp lake, a syndicate lake and a stretch of the River Lea, plus there’s a very private weirpool right outside his back door.

We arrived late morning and although I have never fished the Lea in my life I reckoned I knew how I could catch these chub. The river was as low as it ever gets and the water was crystal clear but providing you scale down light enough you can usually attract a bite or two in daylight on maggots, so I set about feeding the swim with maggots – lots of them!

I fed and fed for a full hour before even attempting to cast out my waggler. Being perfectly honest I was gobsmacked when I didn’t catch one on my first cast. So I fed for another half hour and then I did hook one – a fish pushing 5lbs that gave me a hairy old time on the size 18 hook.

From there on things picked up. The wind was a nightmare and made accurate casting and baiting problematic but each time I could get the feeding and presentation right the float would slide under and I’d be into another lump.

I had four or 5 fish before the fish I was hoping for put in an appearance. At 6-4 it wasn’t my biggest ever chub but it’s the biggest I’ve caught on a waggler. What a stunner it was and I had to weigh it twice because it looked far bigger. Half an hour later I had one slightly bigger at 6-5 to complete a stunning brace. Float fishing simply doesn’t get any better than this and I could have gone home happy there and then with no complaints. 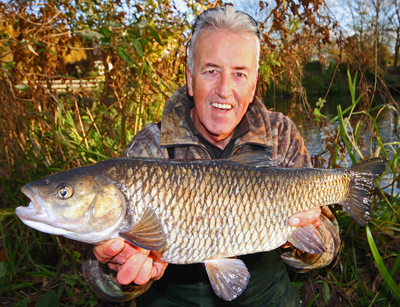 And then things took a surreal turn. I peered down into the water not 10 feet from where I sat to see a huge barbel. Now remember the water was crystal clear, less than 3 feet deep and I had been sat up on the skyline waving my arms around like a windmill as I baited up and repeatedly cast out. And I’d been netting chub not 6 feet from the position where this barbel lay yet it lay there completely unconcerned. Had I died and gone to heaven or something?

So I started dripping in a few maggots that I could see landing practically on its nose and to all intents and purposes it looked to be sucking a few in. I guessed the barbel was at least 12lb. Jerry reckons it is 14-plus, so I’m faced with a fascinating dilemma. There’s barely two hours of daylight left, I’ve just had a brace of 6lb chub, there are more out in front of me and the stretch has done fish to well over 7lb in the past. Do I abandon a potential PB chub to possibly waste my time on a huge barbel, or do I continue to fish for chub and most definitely spook the barbel?

Well, I got Brian (Skoyles) to made me up a barbel rig while I continued to feed the chub shoal. I then managed to position a hookbait within a foot of the barbel’s nose without spooking it and sat back to see what developed. After 20 minutes of stalemate I realised that I would possibly have to wait for last knockings to stand any chance and that would entail abandoning this very special chub fishing opportunity.

The chub won, I’m afraid. The barbel remained in the exact same position for the next half hour even though I netted two or three disgruntled chub right in front of its nose. The next time I looked it had faded away. Such is life. But I’d caught around a dozen, maybe 15 chub and the smallest was over 4lbs. I didn’t even weigh the fives. After all, I’m an angler not an accountant.

Strangely the bites dried up at just the time when I thought it would really kick off. In the gathering gloom I caught little roach, chublets and gudgeon. The party was over, Elvis and his mates had left the building. 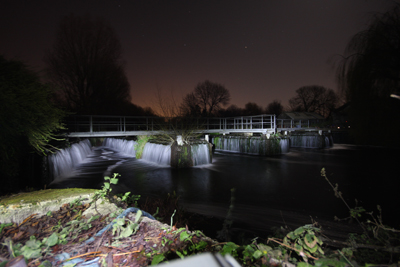 The following morning we were up at dawn and ready for round two. Brian concentrated on his pike rods and caught a beautifully marked fish. I multi-tasked, cooking us breakfast and feeding maggots simultaneously but of those big chub there was no sign. Even switching to feeder failed to produce a single fish much bigger than 4ozs. They’d gone. Off to somewhere quiet, probably thinking ‘Bloody northerner. Don’t want to see the likes of him around here again!’ 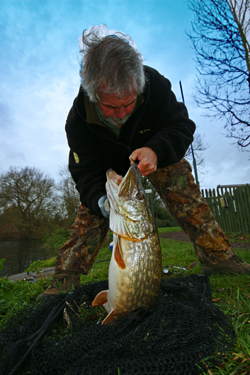