The winter of 2013 was a pretty grim one for those who had to deliver the goods on so many fronts. To say the filming proved to be challenging was an understatement. Floods didn’t help one iota but at least a few zander obliged… 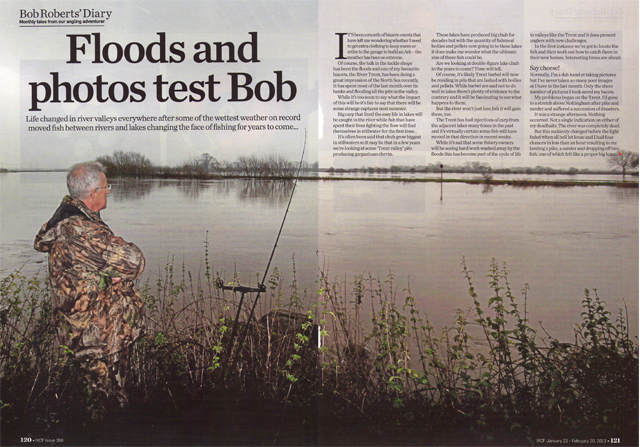 I doubt there’s ever been a time in history when so many anglers wanted to be ‘famous’. Perhaps it’s the fault of TV reality shows like Big Brother, BGT and the X Factor, or just that kids now get so many more opportunities than I ever did. There’s a popular belief that success in life revolves around four judges saying, ‘Yes!’ rather than having a special talent or being prepared to work hard.

Young kids barely out of school tell me they want to be field testers for bait companies, or get paid as a tackle consultant. ‘How do I get sponsored?’ They ask, ‘I’d like to do articles in magazines and get on TV.’ And they mean it, too!

If only it were that easy. Little do they appear to realise that fishing rods are designed using computers. Or that bait technology has more to do with science, nutrition and the aquaculture industry than simply picking out a nice smell. Catching a few fish hardly qualifies you for either job.

If I was to offer three bits of sound advice to ambitious anglers it would be this. Concentrate on your education, learn about photography and make sure you are 100 per cent reliable. Catching fish is the easy bit!

Of course it stands to reason you need to be smart and innovative. It’s a highly competitive market. But unless you’re going down the route of match angling the skill you probably need to work on most is photography. Magazines like this one are crammed full of brilliant photographs. The pounds and ounces are secondary. It’s the image that counts. Study the work of top angling photographers like Lloyd Rodgers and Mick Rouse.  That’s the standard you need to be aiming for.

A good editor will knock your words and ideas into shape but if the pictures are rubbish then forget it. There’s very little that can be done with badly composed, over-exposed or out-of-focus images. And that’s where I have to make a confession. Normally I’m quite the dab hand at taking pictures but for some reason things went badly wrong last month. I’ve never taken so many poor images – I broke every rule and only the sheer number of pictures I took saved my bacon. Just because I fish on my own most of the time doesn’t excuse anything. 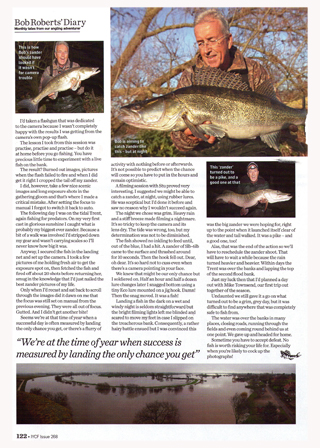 My problems began on the Trent. I’d gone to a stretch above Nottingham with pike and zander in mind and I enjoyed, although ‘enjoyed’ is perhaps not a wise word choice, a succession of disasters.

It was a strange afternoon. Nothing occurred. Not a single indication on either of my deadbaits. The river was completely dead until just before the light faded. Then all hell let loose and I had 4 chances in less than an hour resulting in me landing a pike, a zander and dropping off two fish, one of which felt like a proper big lump.

I’d taken along a dedicated flashgun because I wasn’t completely happy with the results I was getting from the camera’s own pop-up flash. The lesson I took from this session was practise, practise and practise – but do it at home before you go fishing. You have precious little time to experiment with a live fish on the bank. The result? Burned out images, images when the flash failed to fire and when I did get it right I only cropped the tail off my zander. I did however take a few nice scenic images and long exposure shots in the gathering gloom and that’s where I made a critical mistake. After setting the focus to manual for the scenics I forgot to switch it back to auto. 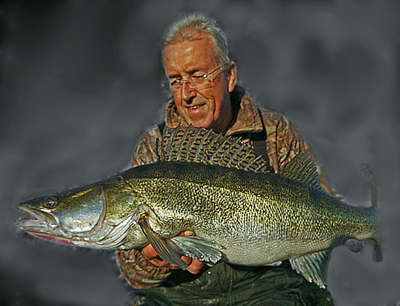 The following day I was on the tidal Trent once again fishing for predators. On my very first cast in glorious bright sunshine I caught what is probably my biggest ever zander. Because a bit of a walk was involved I’d stripped down my gear and wasn’t carrying scales so I’ll never know how big it was. Anyway, I secured the fish in the landing net and set up the camera. I took a few pictures of me holding fresh air to get the exposure spot on, then fetched the fish and fired off about 20 shots before returning her, smug in the knowledge that I’d just nailed the best zander pictures of my life.

Talk about gutted. And I didn’t get another bite.

Seems we’re at that time of year when a successful day is often measured by landing the only chance you get, or there’s a flurry of activity with nothing before or afterwards. It’s not possible to predict when the chance will come so you have to put in the hours and remain optimistic.

A filming session with Stu proved very interesting. I had suggested we might be able to catch a zander, at night, in total darkness using small rubber lures. He was a bit sceptical but I’d done it before and saw no reason why I might not succeed again.

The night we chose was grim. Heavy rain and a stiff breeze made filming a nightmare. It’s so tricky to keep the camera and its lens dry. The tide was wrong, too, but my determination was not to be diminished. Unfortunately the fish showed no inkling to feed until right out of the blue I had a hit. A zander of five or 6lbs came straight to the surface and thrashed around for maybe 10 seconds. Then the hook fell out. Dear, oh dear. It’s so hard not to swear even when there’s a camera pointing in your face. 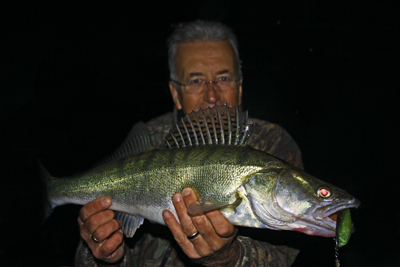 We knew that might be our only chance but I soldiered on. Half an hour and half a dozen lure changes later I snagged bottom using a tiny Eco lure mounted on a jig hook. Damn! I thought, until the snag moved. It was a fish!

Landing a fish in the dark on a wet and windy night is seldom straight forward but the bright filming lights left me blinded and scared to move my feet in case I slipped on the treacherous bank. Falling into a muddy tidal river in the dark is not to be recommended. Consequently a rather hairy battle ensued but I was convinced this was the big zander we were hoping for, right up to the point when it launched itself clear of the water and tail walked. It was a pike – and a good one, too! Quite how predators can detect a soft rubber lure in the dark amazes me but it just goes to show how highly developed their senses are.

Alas that was the end of the action so we’ll have to reschedule the zander shoot. Unfortunately that will have to wait a while because the rain we were putting up with turned heavier and heavier. Within days the Trent was over the banks and lapping the top of the second flood bank. Of course, being the first flood of the winter it was carrying tons of leaves, every scrap of bankside litter that has accumulated over the summer, branches and even whole trees. 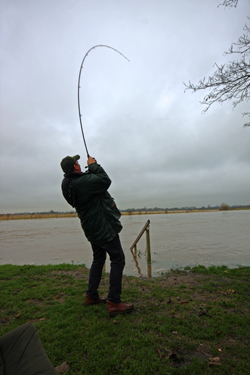 Just my luck then that I’d planned a day out with Mike Townsend, our first trip out together of the season. Undaunted we still gave it a go on what turned out to be a grim, grey day, but to be honest it was difficult to find anywhere that was completely safe to fish from. The water was up and over the banks in many places, closing roads, running through the fields and even coming round behind us at one point. In conditions like that you can easily get cut off and stranded so after trying a couple of spots we gave up and headed for home.

Mike even hooked a fish but to use his own excuse, ‘That’s the first time I’ve ever lost a fish in the top of a tree!’

Sometime you have to accept defeat. No fish is worth risking your life for. Especially when you’re likely to cock up the photographs.