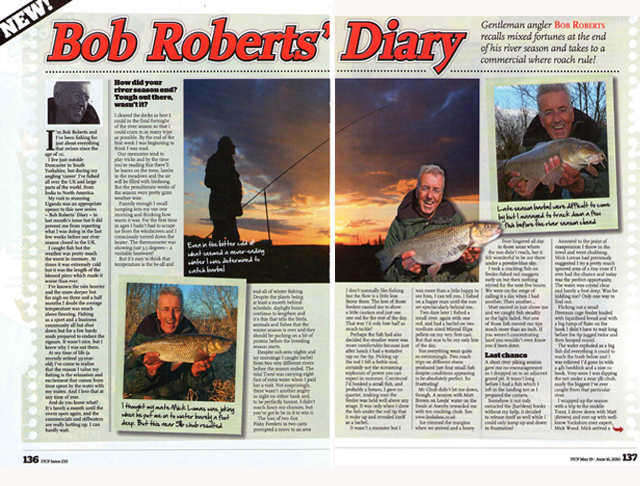 How did your river season end? Tough out there, wasn’t it?

I cleared the decks as best I could in the final fortnight of the river season so that I could cram as many trips in as possible and by the end of the first week I was beginning to think I was mad. Our memories tend to play tricks and by the time you’re reading this there’ll be leaves on the trees, lambs in the meadows and the air will be filled with birdsong but the penultimate weeks of the season were pretty grim weather wise.

Funnily enough I recall jumping in my van one morning and thinking how warm it was. For the first time in ages I hadn’t had to scrape ice from the screen and I consciously turned down the heater. The thermometer was showing just 3.5 degrees – a veritable heat wave!

But it’s easy to think that temperature is the be-all and end-all of winter fishing. Despite the plants being at least a month behind schedule daylight hours continue to lengthen and it’s this that tells the birds, animals and fishes that the winter season is over and they should be packing on a bit of protein before the breeding season starts. 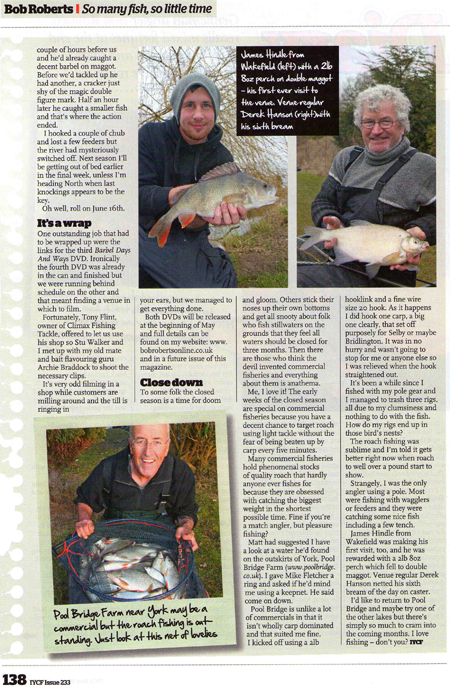 Despite sub-zero nights and icy mornings I caught barbel from two very different rivers before the season ended. The tidal Trent was carrying 8 feet of extra water when I paid her a visit. Not surprisingly there wasn’t another angler in sight on either bank and to be perfectly honest I didn’t much fancy my chances, but you’ve got to be in it to win it.

The loss of two 6oz Fisky Feeders in two casts prompted a move to an area I don’t normally like fishing but the flow is a little less fierce there. The loss of those feeders caused me to show a little caution and just use one rod for the rest of the day – that way I’d only lose half as much tackle!

Perhaps the fish had decided the steadier water was more comfortable because just after lunch I had a tentative rap on the tip. Picking up the rod I felt a feeble nod, certainly not the screaming explosion of power you can expect in summer. Convinced I’d hooked a small fish and probably a bream I gave no quarter, making sure the feeder was held well above any snags. It was only when I drew the fish under the rod tip that it woke up and revealed itself as a barbel. 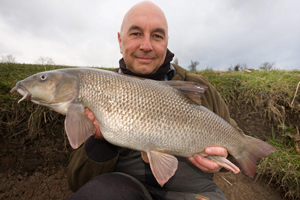 It wasn’t a monster but I was more than a little happy to see him, I can tell you. I fished on a happy man until the sun set spectacularly behind me.

Two days later I fished a small river, again with one rod, and had a barbel on two medium sized Mistral Elips pellets on my very first cast but that was to be my only bite of the day.

Not everything went quite so swimmingly. Two roach trips on two different rivers produced just four small fish despite conditions appearing to be absolutely perfect. So frustrating!

Mr Chub didn’t let me down though. A session with Matt Brown on Leeds’ water on the Swale at Asenby rewarded me with ten cracking chub. Ice rimmed the margins when we arrived and a heavy frost lingered all day in those areas where the sun didn’t catch but it felt wonderful to be out there under a powder blue sky.

I took a cracking fish on feeder fished red maggots early on but then nothing stirred for the next five hours. We were on the verge of calling it a day when I had another. Then another… 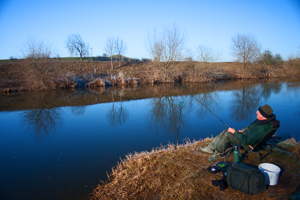 Matt moved in just above me and we caught fish steadily as the light faded. Not one of those fish moved our tips much more than an inch. If you weren’t concentrating hard you wouldn’t even know you’d been done.

A short river piking session gave me no encouragement so I dropped onto an adjacent gravel pit. It wasn’t long before I had a fish which I left in the landing net as I prepared the camera. Somehow it not only extracted the (barbless) hooks without my help, it decided to release itself as well while I could only jump up and down in frustration!

Annoyed to the point of exasperation I threw in the towel and went chubbing. Mick Lomas had previously suggested I try a pretty much ignored area of a tiny river if I ever had the chance and today was the perfect opportunity. The water was crystal clear and barely a foot deep. Was he kidding me? Only one way to find out. 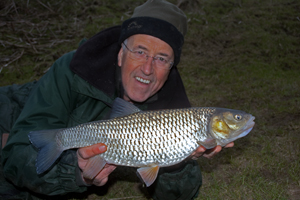 Flicking out a small Drennan cage feeder loaded with liquidised bread and with a big lump of flake on the hook I didn’t have to wait long before the tip jagged twice and then hooped round.  The water exploded as a big fish did everything it could to reach the bush below and I was relieved I’d gone in with a 4lb hook link and a size 10 hook. Very shortly I was dipping the net under a near 5lb chub, easily the biggest I’ve ever caught from that particular river.

I wrapped up the season with a trip to the middle Trent. I drove down with Matt (Brown) and met up with well-know Yorkshire rivers expert, Mick Wood. Mick arrived a couple of hours before us and he’d already caught a decent barbel on maggot. Before we’d tackled up he had another, a cracker just shy of the magic double figure mark. Half an hour later he caught a smaller fish and that’s where the action ended.

I hooked a couple of chub and lost a few feeders but the river had mysteriously switched off. Next season I’ll be getting out of bed earlier in the final week, unless I’m heading North when last knockings appears to be the key.

One outstanding job that had to be wrapped up was the links for our third Barbel Days And Ways DVD. Ironically the fourth DVD was already in the can and finished but we were running behind schedule on the other and that meant finding a venue in which to film. 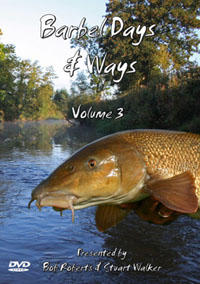 Fortunately Tony Flint, owner of Climax Fishing Tackle, offered to let us use his shop so Stu Walker and I met up with my old mate and bait flavouring guru Archie Braddock to shoot the necessary clips. It’s very odd filming in a shop while customers are milling around and the till is ringing your ears but we managed to get everything done.

Both DVDs will be released at the beginning of May and full details can be found here on my web site.

Bring On The Closed Season

To some folk the closed season is a time for doom and gloom. Others stick their noses up their own bottoms and get all snooty about folk who fish stillwaters on the grounds that they feel all waters should be closed for three months. Then there are those who think the devil invented commercial fisheries and everything about them is anathema.

The early weeks of the closed season are special on commercial fisheries because you have a decent chance to target roach using light tackle without the fear of being mullered by carp every five minutes. Many commercial fisheries hold phenomenal stocks of quality roach that hardly anyone ever fishes for because they are obsessed with catching the biggest weight in the shortest possible time. Fine if you’re a match angler, but pleasure fishing?

Matt had suggested I have a look at a water he’d found on the outskirts of York, Pool Bridge Farm. I gave Mike Fletcher a ring and asked if he’d mind me using a keepnet during my visit ad he said come on down.

Pool Bridge is unlike a lot of commercials in that it isn’t wholly carp dominated and that suited me fine. I kicked off using just 2lb hook links and a fine wire size 20 hook. As it happens I did hook one carp, a big one clearly, that just set off purposely for Selby or maybe Bridlington. It was in no hurry and wasn’t going to stop for me or anyone else so I was relieved when the hook straightened out. 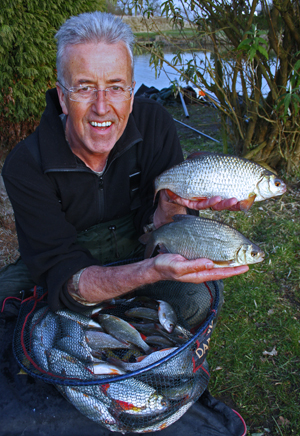 It’s been a while since I fished with my pole gear and boy did it show! I managed to trash three rigs during the day, all due to my clumsiness and nothing to do with the fish whatsoever. How do my rigs end up in those bird’s nests?

The roach fishing was sublime and I’m told it gets better in the coming weeks when roach to well over a pound start to show. Strangely I was the only angler I could see who was using a pole. The majority were fishing with wagglers or feeders and they were catching some nice fish including a few tench. James Hindle who hails from Wakefield was making his first visit, too, and he was rewarded with a two-and-a-half pound perch that fell to double maggot. Meanwhile on the other side of the island from me, venue regular Derek Hanson was netting his sixth bream of the day on caster.

I’d like to return to Pool Bridge and maybe try one of the other lakes but there’s simple so much to cram into the coming months. I love fishing – don’t you?