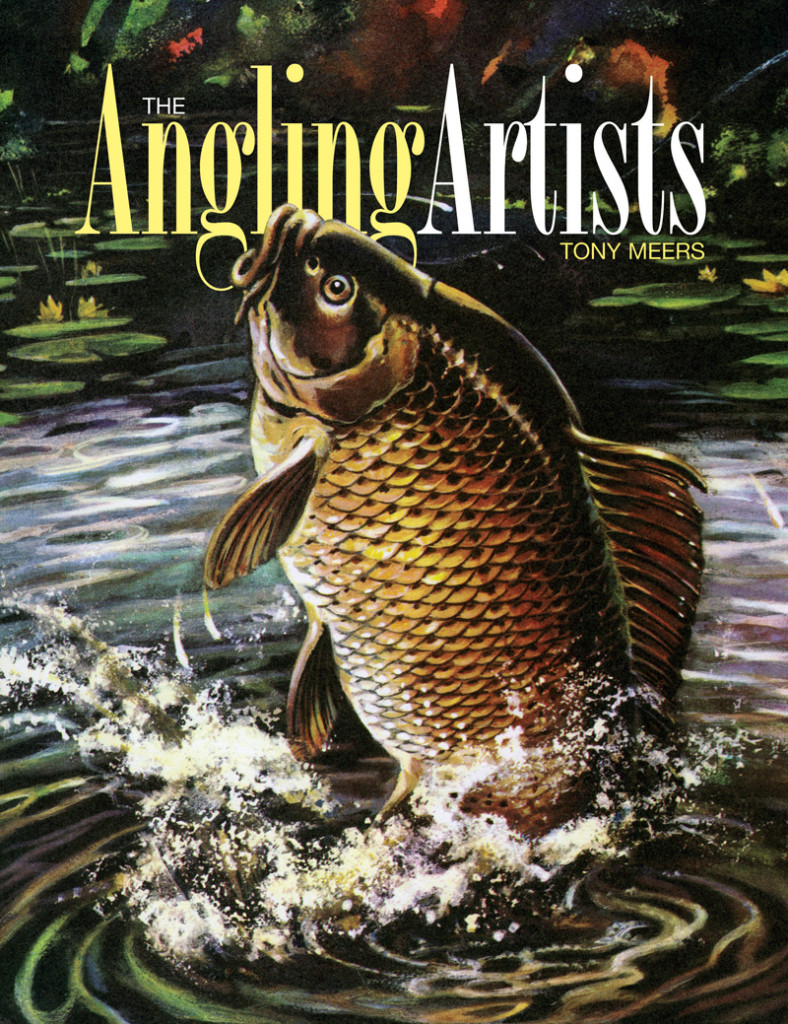 The Angling Artists is a magnificent book compiled by Tony Meers and produced in the classy manner we’ve come to expect from Stephen Harper. It’s far more than a book of pictures, it weaves angling tales and experiences with the finest artwork around.

From the foreword by Bob Buteux

When Tony Meers mentioned to me his idea of putting together a book about some of our most talented artists, and to showcase their various styles of art, I thought it was a great idea. Tony’s enthusiasm is equalled by that of the artists who wanted to contribute to this unique book. In addition, each artist has written of unusual experiences and red letter days whilst fishing.

Most of the contributors are friends and acquaintances of mine. I have original pencil drawings, scraperboards and watercolours by ten of them hanging on my walls here at home, so I know of their capabilities and can foresee this book as becoming highly regarded, and something rather special.

Tony, a graphic artist himself, has acquired a reputation for ingenuity and meticulous attention to detail through involvement with previous publications. For my part, I was pleased to see chapters included by a few of our famous departed artists, but greatly saddened with the untimely death of my friend John Searl. Included within this book is probably the last commission that this outstanding man produced.

Another of my favourite artists within these pages is ‘BB’, who I met on several occasions; a true gentleman. 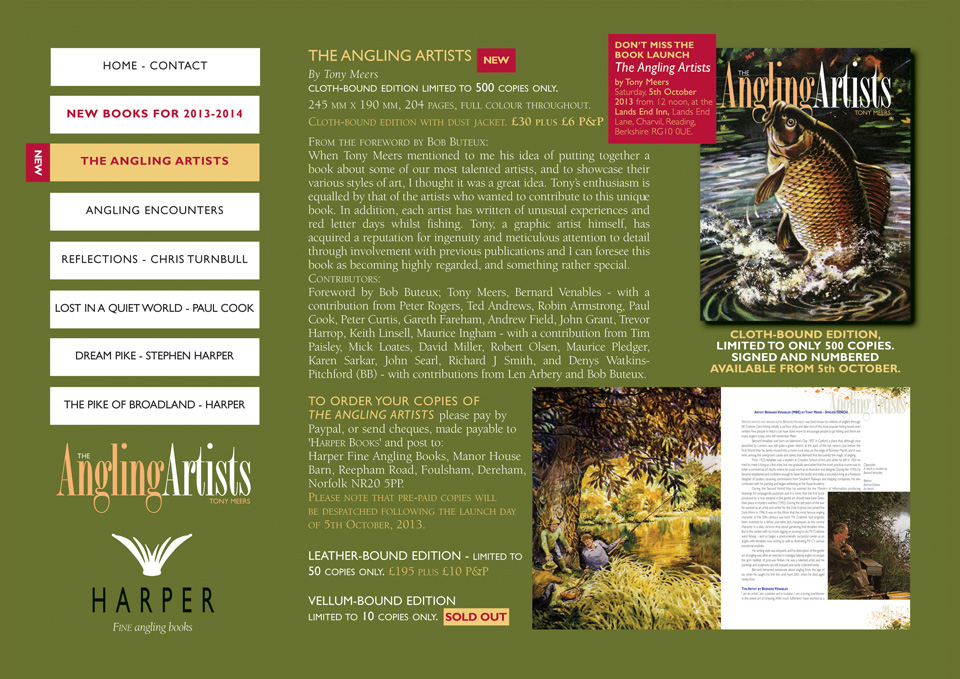 From the introduction by Tony Meers

My love of angling art stems back to my childhood, when taken by my uncle into a local tackle shop on the Old Kent Road. I was investigating the far corner of the shop where there were shelves of books on all forms of angling; coarse, sea, and game, when my eyes were drawn to the cover of one particular book Fishing with Mr Crabtree by Bernard Venables. I turned the pages until I came upon the Autumn chapter which is headed ‘The Splendid Perch’, and eagerly read Bernard Venables words:

The perch is a fine, glowing, handsome fish, easily the most handsome of coarse fish. Many a boy had been set upon the road to becoming a life-long angler by catching a little perch. It would not have been a big perch: just one of those little greedy perch that swarm in many waters and rush at any bait that comes their way. But even so small, it would have had the characteristics of its kind: the splendid colour, the fiercely erected dorsal fin, the general air of find brigandage. The boy would have gazed with fascinated wonderment as he sucked the fingers that had been pricked by the sharp spines of the little fish’s dorsal fin, and the angler would have been born in him.

But is was Bernard’s illustrations that really grabbed my attention, so much so that my uncle purchased the book for me, and it still sits in my bookcase today, ready to give me inspiration when needed.

Although we have to go back to around 40,000 BC to find the first recorded ‘Angling Artists’ – ‘Tianyuan Man’ from the Paleolithic period, researchers and archaeologists have discovered cave paintings’ by one of the earliest modern humans to inhabit eastern Asia, depicting their fishing exploits, and also the remains of freshwater fish bones, which confirm that fish were important for their survival.

And again, we have to travel to around 2,000 BC to find the first recorded paintings of angling for sport. The tombs of the Egyptian Pharoahs display probably the earliest paintings showing fish being caught with a rudimentary type of rod and reel. The ancient River Nile was full of fish; fresh and dried fish were a staple food for much of the population, and fishing for sport was practiced by kings, princes and commoners alike.

The first English book on angling was The Treatyse of Fysshynge wyth an Angle, printed by Wynkyn de Worde in 1496, with an illustrated frontispiece of an angler in action.

When William Caxton brought the skills of printing from the Low Countries in the late 15th century, he brought with him a craftsman, Wynkyn de Worde. Caxton set up his press in Westminster, but after his death Wynkyn de Worde moved the business to Fleet Street, and for thirty-five years produced books and printed matter for the legal and ecclesiastical establishments in this area. When he died in I535 he was buried in St Bride‘s Church, which subsequently became known as ‘the Printers’ Church.’ The earliest printed illustrations in books were woodcuts. Although copper plate engraving was invented in the 15th century it did not become widely used for printing illustrations in books until the late 16th century. Around 1820 steel plate engraving was used in preference to the previous two methods, although woodcuts and copper plate were still used to produce illustrations in many books.

So illustrations of anglers, angling and fish have always been very popular, and within the pages of ‘The Angling Artists’, you will see art from some of the top wildlife and angling artists in the country. Unfortunately some are no longer with us, but with kind permission of their families, I have been able to gather together some of the best angling art you are ever likely to see in one book.

In some cases the artists work covers all aspects of the countryside and angling, but for this book, it was their favourite fish I have asked them to exhibit, to hopefully capture the essence of why we all take part in this glorious sport of angling.

The artists have also written about an unusual experience or ‘red letter day’ while out on a fishing trip – stories of mighty mahseer, giant carp, and 2 lb roach, but it was their enthusiasm for fish, big or small that I wanted to capture.

You can purchase the book HERE