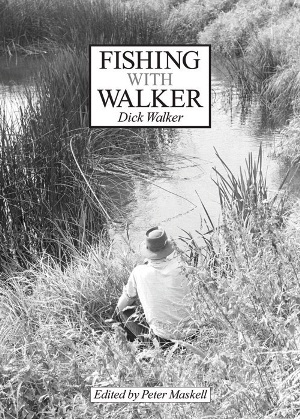 It is more than a quarter of a Century since Dick Walker died yet his legacy lives on. It does so for good reason. He was a one-off. Walker had a gift – he could raise controversy for the fun of it, he might inspire and at the same time he’d challenge almost everything you believed in. He was inventive, brought science to fishing, developed numerous items of tackle we take for granted today, but above all else he could catch fish.

I have one major complaint about Fishing With Walker – it is not long enough! After reading through 197 pages I wanted to read 200 more! No, make that 400 more, for Walker doesn’t just educate, he entertains, even when I’m not quite sure he’s being serious.

Take his statement on pike as an example: ‘In the majority of fisheries, pike are more of a liability than an asset’. Talk about lighting the blue touch paper. But he didn’t make these statements lightly. He argued his corner vehemently and in doing so took the issues of pike conservation way beyond the confines of the floppy hatters of the time. In little more than a dozen words he managed to involve every angler in the country. And who’s to say he believed it? Who’s to say he didn’t set himself up in a trap to set folk talking seriously? It’s a tactic he was no stranger to.

We’ll never know for sure, will we?

And it wasn’t just pike that came under his scrutiny. Walker had an opinion on almost everything. His views on match fishing lit fires under the match fishing columnists of the time and you would regularly find the columnists at the back of the paper (match anglers) locking horns with those nearer the front (specialists) in heated debate. But this was healthy and invigorating.

The book is broken down into four parts – Catching Fish, Tactics, Controversy and Comedy, and Facts About Fish. In Facts About Fish Walker writes about whether fish can see colours. He explores a notion that fish cannot see red. This by the way was in 1966, almost 50 years ago. His conclusion was that if you fish on the assumption that fish can see a whole lot better than you can, you will catch more.

To illustrate how times have changed, Angling Times’ top columnist of a few years ago resurrected the same subject – his solution to the conundrum was buy the new red line I’m promoting…

Oh dear, I suspect Walker would have exposed the man as an imposter had he been aroun! But times change, I guess. No longer do media darlings write about the beauty of angling, or explore it’s mysteries and conundrums. How foolish when you can be paid to promote your sponsors wares instead? The publisher will be happy because he can use this to secure a market share of that same company’s advertising budget.

No, we’ve come a long way since Walker but I’m not sure we haven’t gone backwards. Commercial interests have swamped the spiritual reasons why fishing captivated us in the first place.

As a youth Walker inspired me. In my middle ages he gave me much to reflect on. Today he has my utmost respect; he was a man ahead of his time. This book gives you a mere insight into why. Go out and buy it. You won’t regret it.

More of the same please!

Fishing With Walker is limited to just 500 numbered and signed copies and is priced at £26.95 + £2.75 First Class p&p. To order copies direct, just send a cheque for £29.70, made payable to Peter Maskell Publishing Services, to Peter Maskell, Churchview House, Main Street, Wilsthorpe, STAMFORD, PE9 4PE. For further details you can email: petermaskell@btinternet.com

A limited number of 35 signed leather-bound copies in slipcases are also available at £165 + £7 p&p.