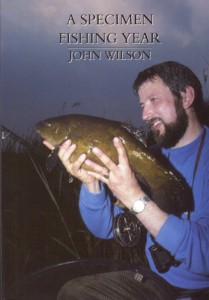 Let us be in no doubt, John Wilson is an iconic figure. He effectively brought angling to the masses with his ‘Go Fishing’ television shows, while his trademark laugh and catchphrases quickly polarised viewers. John was the angling’s very own Marmite; you either loved him or you hated him. The vast majority love him but others have been less than charitable but the thing no-one has ever questioned is his angling ability.

Polls in the press regularly place him at number one among our most influential anglers and as his status grew he was able to expand his broadcasting world from the sleepy Norfolk hollows to the very frontiers of angling.

In the early series we saw him tackle bream and tench, carp, roach, chub, perch, pike and barbel; he also tackled sea fish and the game species, salmon, trout and grayling, mostly within a few hours drive of his front door, and then he switched to the exotic. Mahseer in India, Nile perch, catfish from the Zambezi, marlin, tarpon, tigerfish, bronze whaler sharks, cod from the arctic and so on. We might see him at the foot of Murchison Falls one week and flying over the Alaskan Tundra in a light plane the next. The world was his oyster and we forget that he actually had quite humble beginnings.

As a Norwich fishing tackle shop owner in the early Seventies his list of angling achievements was far from spectacular. He had never caught a 20lb pike, a 9lb bream or an 8lb zander. His best perch was a shade over 2lb, tench 6lb, and chub 5lb 2 1/4oz. John Wilson was just a normal guy, an enthusiastic, passionate angler like so many others.

Which is why I loved this book. It came before the cameras came a knocking so it’s an honest and sometimes gritty affirmation that having the latest rig or bait, the best rod or reel simply isn’t enough to guarantee success. It puts my own angling into perspective because it proves that catching fish has much to do with where you are, not how good you are.

A Specimen Fishing Year is a record of Wilson’s fishing trips during 1976, warts and all. A year in which he barely set foot outside of Norfolk and his captures reflect this. His feet are firmly on the ground. He catches fish no different to those you and I might catch but his passion for angling shines through.

It is so easy to imagine that John Wilson ran around catching 25lb pike at the drop of a hat. Surely he would pop out and catch a 30lb carp or maybe a monster bream and some huge tench. Well he didn’t, and it’s all put into perspective here. It’s real. In fact I’m going to lend this book to a friend of mine who has recently been driving down to the Fens hoping to improve his PB perch by a mere three ounces more than those we’ve caught locally. He’s obsessed by size. Wilson wasn’t and look where he ended up.

One thing Wilson was able to capitalise on, and for this I will be eternally jealous, was the Wensum roach. During the Seventies the Wensum was probably the UK’s finest specimen roach river and he had it on his doorstep. He talks of catching a 2lb roach before breakfast as though it was nothing unusual. He and his friends were hoping to catch a 3lb roach. Around these parts a fish one third of that size is a specimen and the combined effects of dredging, abstraction and cormorant predation mean we’ll probably never see roach fishing like Wilson experienced again.

Despite running a business and raising a family, he somehow managed to squeeze in 100 sessions that year, albeit some were no longer than a couple of hours on the way to, or from, work but each is faithfully recorded in this diary and will remain a timeless record of his endeavours.

It shows Wilson wasn’t the big cheese in 1976 that he is today and that passion and dedication when combined with a few breaks will take an angler a long way and that alone should be sufficient inspiration for the current crop of aspiring young anglers to keep plugging away even if it appears to be against all the odds because what we really learn here is that Wilson is normal, just like you and me, and that even superstars have bad days.

A Specimen Fishing Year is available from the Little Egret Press in a limited edition of just 600 copies and are signed by the publisher price £23.95. A further 25 copies will be bound in full leather at £165.00.