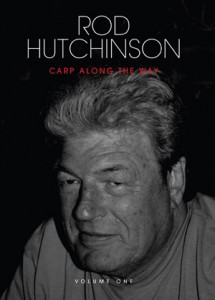 Carp Along The Way, Volume One

If there’s a more disorganised angler in the world than Rod Hutchinson, I’ve yet to meet him.

The first half of this book was written by Rod around 40 years ago in a manuscript titled ‘An Angler By Accident’. And there it lay, abandoned in a cardboard box until Tim Paisley ‘discovered’ it whilst researching material for a book with Rod.

Above all else it’s just so typical of the man. Who else would ‘forget’ they had written half a book?

At a recent show Rod confessed to the audience that he’d been an addict in his time – a carp addict. When he needed his fix nothing would stand in his way. Work, family, friends, they were cast aside as he strove to temper the demon that drove him on.  Can you imagine a grown man crawling around on all fours in his front room sucking up grains of hemp from the floor as he tried to work out how carp feed?

From his childhood in Grimsby to the banks of Redmire via Kent and the home Counties with a calamity round every corner. Few angling books have the capacity to make you laugh out loud but this one has it.

The second half of the book pulls together material from the many anecdotal magazine articles he wrote during the 1970’s and 1980’s and there’s a definite shift in quality at this point. Although not compiled chronologically the quality of writing ‘matures’ the further you get into the book.

On that score, Volume Two, due out next year, should be a cracker. In saying that, it is set to be a technical-cum-practical work rather than a bunch of stories.

You can order online at www.anglingpublications.co.uk