A Review By Andrew Kennedy 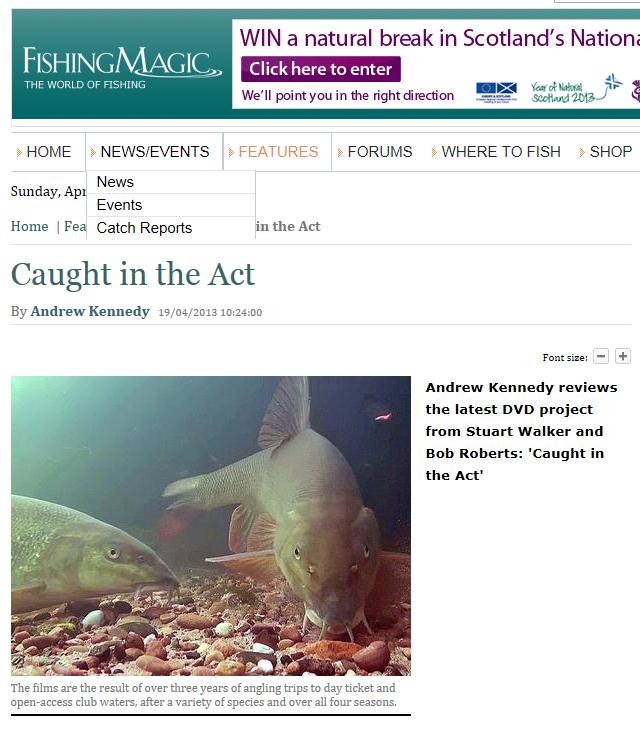 A rather splendid fully illustrated review of Caught In The Act has been published on the Fishing Magic web site. You can read the whole text HERE but I’d better warn you it’s almost as long as one of my blogs! In case you’re in a hurry here’s a condensed version:

“Both Bob and Stu are extremely accomplished anglers, which means that when they effectively take on the roles of presenter, director, and producer, they have the perfect understanding of how to make a series that anglers will want to watch.”

“A Passion For Angling is the obvious example of a show which was as atmospheric as it was entertaining and it remains the high watermark in angling filmmaking to this day. Undoubtedly it is the programmes which best capture the atmosphere and experience of angling that set my needles flickering most, but it is rare that the filmmaker gets this final, most difficult element right. Having watched all ten acts, I can tell that in making CITA, this was something that Bob and Stu worked hard on getting right; and in my opinion they succeeded.”

A small but important part of setting the tone of an angling film is choosing the right narrator. In selecting Keith Elliott, Bob and Stu seem to have stumbled across a man born for the part. Keith’s voice is soft but evocative and he clearly lives and breathes angling and its history.”

“Both anglers exude enthusiasm and confidence alongside a genuine belief and interest in what they’re doing, whenever they are on screen. If you’re familiar with Bob’s online persona, you’ll know that he can be controversial, outspoken, even belligerent and bitter-sounding at times, but witness him in his ‘natural habitat’ by the waterside and he seems the polar opposite character. Authoritative and knowledgeable yes, but amiable, excitable and engaging along with it. “

“The passion he has for fishing jumps out of the screen and at times you can almost watch his veins surge with blood and adrenaline as he sees a fish moving or spots a bite. There are times during the film where he has an almost child-like spring in his step and it is reassuring to see that angling can still bring such pleasure to a man who has fished as often and for as long as Bob has.”

“Despite both anglers’ specimen hunting pedigree, when they each separately state that ‘it’s not about their size, it’s how you catch them’, you get the feeling that they mean every word.”

“The mixture of short but well-articulated rig and tackle talks in each act blend effortlessly into the film between scenic wide-angle shots, close-ups of the anglers in action and of course, the quality underwater footage. It all seems very well judged and the quality of camera work belies the fact that only two of them – neither of whom is a professional cameraman – worked on the project.”

“Occasionally a microphone gets blown in the wind or rubs against a coat and interferes with the sound quality, but this is a minor criticism of what is on the whole, a fine angling film.”

“Every single one of the acts made me want to go out and fish myself, which is surely the ultimate test of any fishing programme. I highly recommend that you watch CITA to judge for yourself, but I would rate it as one of the best fishing programmes I’ve watched since ‘A Passion’ (for angling).”

To purchase a copy of Caught In The Act simply click HERE.

Still not sure? Then perhaps this 6-minute extract from the first disc will help you decide. To fully appreciate the trailer we recommend changing the Youtube video quality settings to HD.