John Wilson was awarded an MBE in the 2009 Queen’s Birthday Honours List.

Here at www.bobrobertsonline.co.uk we’d like to congratulate John on the honour and recognition which he so richly deserves. 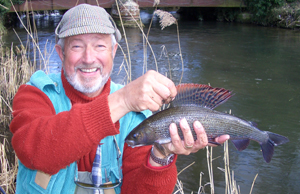 Voted as ‘The Greatest Angler Of All Time’ by readers of the Angling Times in 2004, John has been making television programmes for more than 20 years. Famous the world over for his infectious laugh, author of countless books and DVDs, he’s travelled the world in search of large and exotic species. He’s certainly come a long way from his roots.

Born in Enfield (1943) John enjoyed a varied career spanning hardressing, printing and the Merchant Navy before opening of his own fishing tackle shop in Norwich (1971).

Today he lives at Great Witchingham, Norfolk by the side of his own lakes near the Wensum. Lucky bugger!

Here’s John in the company of Rex Hunt at the lakes:

And here’s a link to a review of a book he released recently.