The worldwide tackle giant, Daiwa Sports has generously agreed to take over as competition sponsor for the Green Un Club Match Angler Championship in a move that recognises the popularity and importance of this long-running event.

The competition is aimed right at the very lifeblood of match angling – club match anglers!

Indeed, open match anglers, gunslingers and one-venue-specialists are positively discouraged from taking part. Our championship is aimed fairly and squarely at the grass roots of fishing.

Far more anglers compete at club level each week than ever turn up at so-called ‘open’ matches. The open scene is in tragic decline. Even the once prestigious National Championships which used to attract over 400 teams, when teams comprised 12 anglers plus bank runners and stewards. Today they barely attract 100 teams (of ten) in total. Huge opens and river championships frequently used to pull in over 500 anglers. Today we see ‘opens’ reported in the press where less than two dozen anglers turn up. 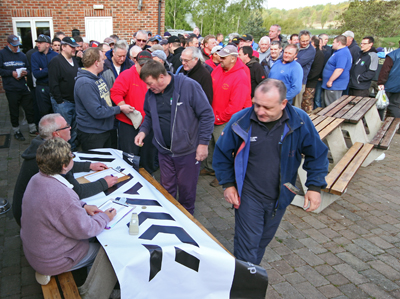 By contrast, certainly in South Yorkshire and the North Midlands where this competition is based, the club match angling scene is thriving. In the past decade alone entries to the Green Un Championship have multiplied ten-fold and new clubs join all the time as word spreads. It’s good news for the fisheries, good for tackle shops, good for the clubs and all the anglers who take part because it raises the profile of angling in a positive way.

Let’s hope it’s good for Daiwa, too, because it’s so rare for a worldwide giant to reach out and generously reward the man in the street.

The competition centres around the circulation of the largest selling weekly sports paper in the country. The Green Un is published on a Saturday and features the six local football teams Wednesday, United, Doncaster, Barnsley, Rotherham and Chesterfield, plus rugby, cricket, racing, golf, bowls, athletics and numerous other sports. Each week a full page is devoted to fishing, in other words, we’re up there on a similar footing as the football teams but for a very good reason.

This is the biggest, best and longest running competition of its kind in the whole country.

The winner of every match reported to the paper receives an invitation to fish in the semi final – a match that is usually worth around £3,000. The 20 section winners then go through to a head-to-head final where Daiwa will provide the winners with £3,000 worth of tackle from the new 2012 range. Each of these matches will receive the full colour, double page spread treatment in the paper.

I endeavour to limit the competition to genuine clubs operating within the circulation area of the newspaper and if your club is eligible and would like to take part just contact me at the following email address: greenun@sky.com