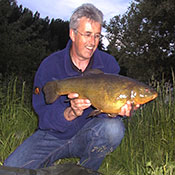 My love affair with tench probably began nearly forty years ago when I witnessed the capture of a four-pounder from Arksey Railway Pond. I’d never actually seen one in the flesh, nor had I ever been close to a fish of such immense proportions. It was huge!

Looking back, that one fish planted a seed in me that still flourishes today. It inspired me above all else to stop just reading the writings of Walker, Stone and Taylor and to actually do something with the knowledge they’d given me. I began to specialise and I had a goal. I too wanted to catch a four-pound tench.

That wasn’t as easy as you might think, living in South Yorkshire. Tench themselves weren’t exactly thick on the ground and the waters I could reach by bike or public transport were unusual in that they contained mostly tiny tincas. Walker wrote that to catch a tench under two pounds was quite rare and he would regale us with tales of his punting adventures at Wooton and Woodstock and the huge bags of four-pounders they took, yet he never did managed to catch a single six-pound tench in his entire life. By contrast the two best tench waters available to me contained shoals of fish in the two to twelve ounce bracket but a two-pounder was deemed a cracker.

That all changed when a club bailiff we kids knew only as ‘Sliding Fred’ set about thinning the dense lily beds in an almost unfishable pond near Toll Bar. Fred’s endeavours revealed tench of a size we could only previously dream. The four-pound goal was soon reached and the five-pound barrier beckoned. Other club members dismissed my size eight hooks, five-pound line and split cane Avon rod as crude and unsporting.

The difference was I landed the fish I hooked, they didn’t, and a lesson was learned that stands me in good stead today. You must always use tackle to match the circumstances.
Bags of three and 4 fish before breakfast became my norm. Occasionally I would land six and on one momentous occasion I took a thirteen yet I couldn’t beat the five-pound barrier, 4lb 14oz being my biggest  and what’s more, I’m embarrassed to admit that a five-pounder would elude me for several decades.

How different it is today. Providing I’m prepared to travel I can more or less catch a ‘five’ to order. It’s down to habitat, you see. The clay ponds and estate lakes of my youth seldom produce fish much over five pounds whereas fish of this size are considered relatively modest specimens in gravel pits. The richer the gravel pit, the bigger the fish, and gravel pits that receive a lot of attention from carp anglers, especially those who put in plenty of bait, produce incredible tench. Two summers ago I fished the Carp Society water, Horseshoe Lake, near Lechlade, Gloucestershire and took no less than 44 tench in a single session. Those fish averaged 7 pounds each! By contrast to my youthful experiences when rising at 3am was normal, gravel pit tenching is a very civilised affair and you are more likely to score from mid-morning onwards which is good news for someone who enjoys his kip as much as I do.

Horseshoe remains one of my favourite tench waters, mainly because the regulars do everything they can to avoid them, consequently the fish don’t get too pressured and the only bait they are really shy of is boilies. I’ve had sessions where the only way to get a rest was to stop using corn, worms or maggots and put a boilie on the hook.

Early season tench patrol along the margins and can sometimes be found just a few feet out. One of my favourite ways to catch them is to spread a light ‘path’ of bait diagonally down the margin slope just off to one side of my swim. It’s a bit too close for conventional legering in my book and float fishing invites line bites. Instead I sit right back with the rod tips barely protruding over the margin and freeline, To ensure I reduce line bites but still register takes I incorporate a few inches of leadcore. This nails everything down and you simply watch the line below the rod tip for bites. Of course you can only do this in calm conditions but we are fishing in the best time of year weather-wise.
It’s pretty exciting stuff and sometimes you will actually see a tench take your bait. That surely has to be the most exciting kind of tench fishing on the planet.

Five Tips
1. Feed a mixture of trout pellets, corn, casters, dead maggots and hemp but do not overfeed
2. Ring the changes with hook baits. Combination baits like a grain of corn and to red maggots work really well
3. Sit well back, stay off the skyline and make as little noise as possible
4. Set the rods on sensitive bite alarms just in case your attention wanders
5. Check your clutch is set. A big fish hooked on a short line is a recipe for disaster