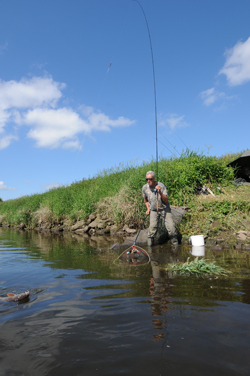 For a number of seasons my Trent barbel fishing was pretty much one dimensional. Okay, I may have experimented with rigs, with baits and tactical approaches but if you boil it down to basics, I would turn up, chuck in some bait and fish over it with two rods pointing skywards.

Now come on guys, where’s the skill in that?

I’ll go further and say 95% of my Trent barbelling was being done with one bait or variation of it – pellets. Okay, I used hemp with the feed but loading a feeder with hemp and pellets is hardly a revolutionary tactical change from loading one with pellet only.

I could put up with it in summer when one rod or the other would hoop over periodically, but in winter it could be mind numbingly boring. So much so I did very little barbel fishing last winter on the grounds I could have more fun decorating.

But the more I watched the underwater footage that Stu and I had filmed for our Barbel Days And Ways DVDs the more I realised that I was missing a huge trick. You see, not only did we reveal that certain expert views about how bait behaves on the riverbed were utter codswallop, closer watching revealed how barbel were quite happy to intercept moving baits both on and off the bottom. 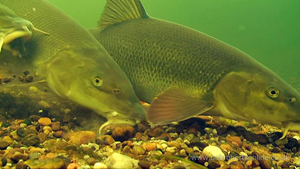 How often have you read that the four barbules around a barbel’s mouth are used to feel around on the bottom and those tiny little vibrations you feel are being transmitted up the line as a barbel touches your hook link.

In the event of a fishes barbules touching your hook link there is no way in the world it will be seen on a rod tip or by touch legering. Think about it. Use a bit of common sense. 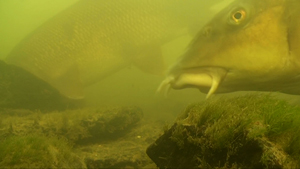 Barbules don’t have muscles. The fish don’t waggle them around. From my own experience and interpretation of what I’ve watched on camera at river bed level, I suspect barbel taste the water with their barbules. When they are bottom feeding they have no visual contact with what is on the river bed beneath their underslung mouths and it is the correlation between the signals they interpret from the four barbules which enables them to hover centrally over a food item.

Barbel hoover up food items along with anything that’s near it, be it gravel, crustaceans, hemp, or anything else. They then filter out the debris from the goodies and this can be clearly seen in our films.

However we have shot footage where barbel identify food items visually and you can literally see their eye follow a pellet as it comes floating down on the current before the barbel veers across and takes it neatly. In one shot we see a rig that has caught up on weed and is swaying from side to side.

A barbel approaches the pellet, its eye is inches from the bait, clearly looking at it. Despite knowing something is obviously wrong the barbel sways from side to side in the current at exactly the same speed as the pellet. It’s as if the two are attached by an invisible piece of elastic. 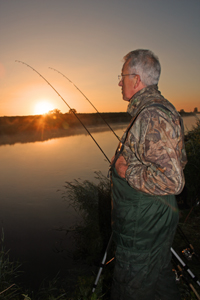 All closed season long I thought about how to use this to my advantage. If they’d take a moving bait, why not give them one? So I set out my stall this year to spend more time trying to catch barbel on moving baits. I also felt that these fish had just spent at least 3 months, probably six or eight, eating nothing but naturals. What bait could I use that best reflected their diet? Only one answer, maggots.

Last year I had some cracking chub on maggot and what better way to start the season than to combine chub, maggots and barbel fishing.

At the crack of dawn on opening day I was sat by the river loose feeding maggots. Not too many at first, just a trickle, because I had a plan. It seemed daft to fish for one species or the other. Why not develop a strategy that enabled you to catch one first, then the other…?

So I’m firing out a dozen maggots every minute or so, like a metronome, drip, drip, drip.

I’m doing this because I know the chub will be on them first, hitting them on the drop. I also know that it would be fatal to start fishing for them too early. Let them settle, let them get used to the feed and start competing for it.

I kept this up for the best part of an hour before I picked up my rod. I’d chosen a Daiwa Spectron Power rod normally be used for bagging carp on commercials. It would handle the 6lb reel line perfectly. With two red maggots nicked onto a size 16 Gamakatsu wide gape eyed hook (GP101) to a 5lb hook link below a 7 No4 alloy stick float, I was ready to do battle. 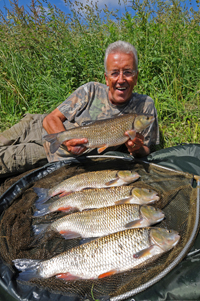 Out went a few loose offerings, I swung the float out underarm to ensure it laid on the water facing downstream in a straight line and let it run through at the speed of the current. The float travelled no more then 10 yards before it buried and my strike was met with a very satisfying thump. Two minutes later I had landed my first chub of the season. In the next hour or so I took maybe ten good chub before I found myself back winding on a much heavier fish. It was barbel number one.

When I hooked barbel number two it was time for a change of tactics. The loose feeding would end there and then. All further feed would be introduced with a bait dropper. Plus, I would now increase the feed and use hemp, too.

That was the signal for the chub to vanish. Every fish after that was a barbel.

Now I must own up to losing a fish or two on this light gear – not due to breakages but due to hook pulls and I put this down to foul hooking fish. Hooks that are set in the lips seldom come out. On the other hand, how come you don’t foul hook barbel when you’re chub or roach fishing? Doesn’t make sense, does it? 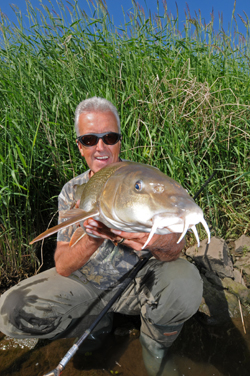 I also had a second rod prepared which is an Infinity Barbel 1.75lb test matched with 10lb line. The float on this was a Drennan Crystal Avon carrying 7AA. An 8lb hook link and a size 12 Gamakatsu Carp (GP101).

When I was confident the barbel were feeding I switched to this and was able to bully a few fish out very quickly but bites then dried up. An hour spent ‘ploughing a furrow’ produced nothing yet a change to the lighter set-up brought instant success.

Clearly the fish were tackle sensitive.

And how come there were no foul-hook-ups on this gear?

The thing I learned was that these barbel would intercept baits presented at the full current speed. Slowing down the bait produced no discernable benefits. If anything I had less bites if I slowed the float down.

But why is float fishing so successful? Well, if you leger a bait you have to wait for a fish to come to you. And then there’s the secondary problem of a taught line entering the feed area. We’ve filmed barbel spooking on anglers lines time and time again. The float simply doesn’t seem to bother them, plus you cover every inch of the swim on each run through.

I shall continue with my experimentation this summer, time permitting as I need to look very carefully at the float availability options. You see, it would be interesting, as the season progresses, to use pellets, pastes, meat, corn, etc, but the problem then comes with finding the right tip to support the weight and also to find heavy enough float patterns without going down the dumpy chubber route, although I’ve no doubt they’d work. But that would probably mean upping the tackle strength, I don’t know. I need to dedicate a bit of thinking time to the problem but it’s a nice conundrum to have, especially as very few folk are competing with you for these fish as they are mostly obsessed with chucking heavy feeders to the horizon whilst I can catch tripping a bait down the margins, rock hopping where any feeder or led would get snagged. 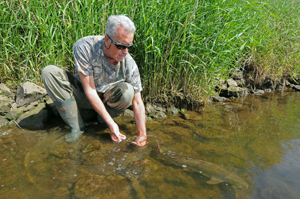 I have to say I’ve thoroughly enjoyed bashing barbel out on light tackle so far, even if it does leave me with a stiff arm the following day. As easy as it is to settle down in a comfy chair, read a book or close your eyes as you wait for the wail of a bite alarm, it’s not ‘proper’ fishing, is it?

Float fishing for barbel is an art that can be learned. It’s a method that all anglers should consider as a serious option to ‘splodging’ and one you should have in your armoury. Just takes a bit more effort, plus you have to hold the rod, dispense with any ideas about using two rods and concentrate at all times.

9 thoughts on “Float Fishing For Barbel”