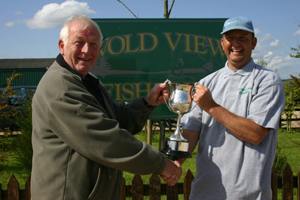 The Green Un Club Match Angler Championship is probably the most popular club match angler event in the entire UK with prizes (in 2009) topping £7,500. It is open to all clubs based in the Green Un sports newspaper circulation area – that’s Sheffield, Rotherham, Barnsley, Doncaster and Chesterfield – and entry is completely free.

Match secretaries need only send me their results in the format outlined below and the match winner will automatically qualify for the semi final which is always fished on the first Monday in May (May day Bank Holiday). Any secretary who submits three or more match results also receives an opportunity to fish the semi final.

Twenty section winners from the semi final go through to our grand final where the prize fund is a cool £5,000. This is the match that every club match angler worth his (or her) salt wants to win. The ‘professional’ open match anglers are barred from entering the competition on the grounds that we fish to Bob’s rules. As much as I like the Tom Pickerings, Alan Scotthornes, the Jamie Massons and the Rob Hitchens of this world, they ain’t fishing my match, nor will they be allowed to while ever I’m running it. It exists to promote and encourage club match fishing and club match anglers.

One or two of our regulars are a bit tasty mind, but on the grounds that they’ve supported this competition for the 13 years I’ve been running it, they deserve an opportunity to fish for their loyalty but that doesn’t mean I won’t be having a quiet word in someone’s ear at some point to say well done lad, but it’s time for you to move on now…!

Submitted entries will be featured on the Angling Page in the Green Un newspaper. The semis and finals get double page colour spreads and they are reported in the leading weekly angling press. You can read a report on the 2009 semi final in this section of the web site.

So, if you’re a club match angler in the Green Un circulation area who’s results don’t receive the publicity they deserve, or you’re a match secretary who would like to give his anglers a chance to fish is the most prestigious club match of the season just cut and past the entry form below into an email and bang it off to me at the competition email address:

Please help me by including angler’s full names, weight and peg number. For example:

Then try and give me a story to work with. What did the winner catch and how? Feel free to include details of methods used, baits, tactics, size of fish, whether he caught early/ late and do feel free to tell me about any unusual or funny incidents that happen. Did a father beat son or vice versa, was it somebody’s birthday, who fell in, broke a pole, lost 15 fish, missed the bus, got lost, you know the stuff I want. Gossip and pictures paint a far better picture than Fred caught 6 carp on paste.