By way of a change, here’s a guest article by my good friend, top bloke, brilliant chef and ace angler, Lee Swords….

In search of Emeralds……Big fat slime covered green ones! 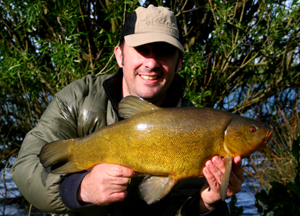 Flushed with the success of the trip down south for crucian gold I have had a bit of a bump down to earth in my search for other precious commodities…In short I haven’t been able to buy a bite.

My trips out for big bronze flanked bream have found me more absorbed in the wildlife that lives on the bankside rather than the aquatic occupant just a few feet beyond it… but I am sure that will change soon enough. I hope so as I am an impatient angler and I simply cannot face the relentless banging away with little in the way of reward and results. 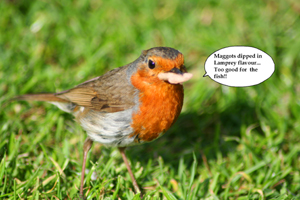 But the omens have been changing….Firstly I was offered a bait sponsorship with Teme Severn which I took them up on and secondly I have been able to arrange slightly more time away from work for myself….Roll on early retirement, I am certainly not one of those that wants to work till they drop! Hell no! The sooner I can pack in working the sooner I get to improve my PB list… and take up painting and photography as a sideline.

Anyway less of my retirement plans and back onto fishing! Seeing that I was struggling with form my friend and fellow DVSG member Mike Townsend arranged for me to accompany him down to Sywell for a 2 day one night trip in search of tench. Sywell is a reservoir full of dreams and is, as I believe Steph Horak once said “Probably responsible for more PB’s than any other water in the country”

Even so, getting one out isn’t without its challenges. Sywell is super rich and its weed growth is lush and widespread. Fishing up to and between these weed beds calls for some thought and a serious measure of responsibility. Casting into the weed and skull dragging fish out and into open water would be the easy option and would ensure fast results but that isn’t going to make the angler in question any friends as the injuries that would be caused over a period of time would more than likely see the reinstating of Sywells old “float only” rules which were introduced some years ago to prevent such damage by irresponsible anglers. 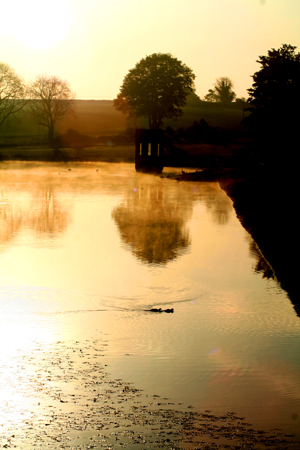 Anyway I am digressing away from the issue…It was decided that a dawn assault would be the order of the day so that we could take advantage of any early morning fish activity.  Which in itself posed a few problems as arriving in Northamptonshire for dawn meant a 1am set off from the frozen wastelands of the north! Mikes cat didn’t want to play the game either it had decided that it wasn’t going to come in but preferred to stay outside and kill mice but after chasing his cat around the garden in nothing but his DVSG underpants his mouse hungry cat was finally caught and locked away leaving South Yorkshires biodiversity safe and sound.

Mike arrived at my place around 1.15 am and we set about the task of loading the car…..Jesus Christ we possess a serious amount of fishing tackle! The suspension creaked as we set off on the long journey down to the M1 motorway and into the strange no-mans which is neither north or south and in some strange mystical way outside the plane of existence that we dwell upon…A bit like Alton Towers, land that exists only within the staple holes, creases and unseen pages of the ordinance survey grimoix! Land that is known as Northamptonshire! Norfolk is similar but flatter….With more tractors and people that collect the registration numbers of Eddie Stobbart haulage Lorries!

Back in this dimension we arrived to find that we were again the only angler’s onsite and after purchasing a ticket we moved towards our swims at the same time as doing so another angler appeared behind us…His sails were trimmed and he seemed to be using a different wind to us, as he gained with every footfall!

Not wanting to relinquish “dibbers rights” on the pegs Mike had chosen, he delved deep to give a display of sheer power, a true “tour de force” on how to get a single wheeled trolley to break the land speed record for a Diawa product! No wonder he has played cricket at Lords…For a big bloke he can’t half shift!

But still the phantom angler gained but he was seconds too late in his arrival he was doomed to fail as Mikes power band sprint ensured that we had prime spots to choose from. The trolley skidded to a halt in the hotspots, smoke billowing from its single wheel…and at that very moment the phantom glided past us and onto the opposite bank directly across from our position. 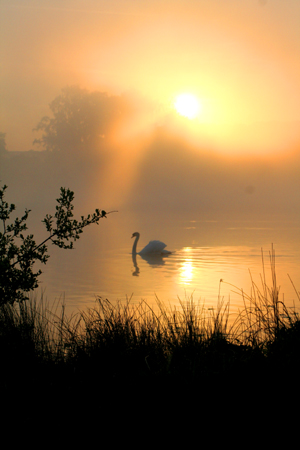 A coin was produced and we tossed for swims…And in true cricketing style Mike picked the winning side and chose to bat from the nature reserve end which gave him a great advantage as it was obvious that there were fish already in residence as they were rolling like a bunch of hyperactive Chinese acrobats jacked up on crystal methamphetamine.

My swim looked good as well and before I had chance to wet a line a tench rolled and gave me a cheeky little wink with its big teddy bear eye. Filled with confidence I decided to give it some tonk and fill the swim in with a proper spodding. Thirty minutes later and a nice little atoll of Teme Severn pellets and assorted particles were well on there way to the surface and every Common Tern in the area was playing chase the spod!

The abundance of aquatic wildlife at Sywell has to be seen to be believed the hatch of damsel nymphs was unlike anything I have ever seen with literally thousands of nymphs’s crawling out of the water and doing their thing on everything and anything…I even had one try to do its metamorphosis on my ear. Juvenile Yellow wagtails scurried through the marginal grass and gorged themselves on these little grubs whilst Reed Warblers hung precariously from the alders that marked the right hand border of my swim and argued with the Reed Buntings for those nymphs that made it to the trees. The fat blackbird ignored the lot of them and simply demanded maggots with menace filled stares.

Mike was also on a spodding session but unlike me he was in straight away… The fish however had other ideas and shed the hook….I was left to wait for my first fish having to watch Mike hook six fish before I finally got a run….Unfortunately it weeded me and slipped the hook. The phantom across the reservoir landed a good fish then packed in stopping for a chat as he went by.

His fish had gone to over 9 pounds and he had decided that enough was enough and being a local he would call it a day…But before he left he informed me that not a single fish had been caught from my swim in weeks and Mike was in the top swim on the entire ressie! 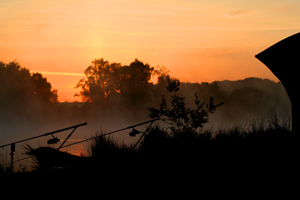 With darkness descending my hopes faded with the falling sun as Mike told me that the tench here were not really heavy on midnight snacking and in most probability I would have a very quiet night with only the bats, rats and other nocturnal creatures to keep me awake.

I was sure that there were tench in front of me, I had seen them! Yes, maybe this was a patrol route and not a traditional feeding bed but that didn’t mean that I couldn’t change that fact! 2kg of Teme Severn bag and stick mix was made up and laced with crushed lamprey boilies and dead maggots and as the top of the sun kissed the horizon goodnight my second bombardment began. 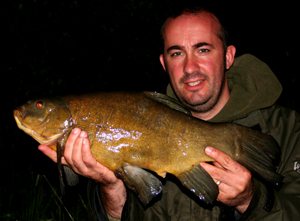 Swirls broke through the oily black surface of the water and single bleeps on the bite alarms informed me that fish were in residence. After a run of single bleeps raised me to full focus I was instinctively reaching for the rod as it went single tone and a Tench raced for cover in the weeds. The rod hooped over and a short but dramatic fight ensued.

Mike came over and did the honours with the net and a personal best male Tench of 6lb 5oz was logged down. Fantastic… I hadn’t blanked!

The chopped down lamprey boilie had done the trick for me! Full of good vibes and confidence I  whispered “Let’s see if we can get another” to myself as I pored a small black Absinthe in celebration…Reaching down into the Sensas bucket to refill my feeder I was startled by a rat jumping out of it! This thing was the size of a small dog and had a tail like a bull whip…Where the hell is my air rifle when I need it! 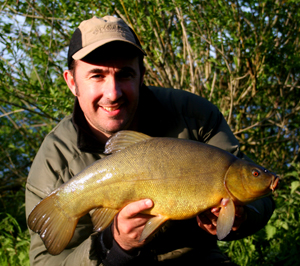 After loading the feeder and recasting I rummaged into my carryall and produced a pair of rat traps, the rats here however are not as mentally impaired as their cousins on the Trent and simply laughed at me as they polished off every crumb of dropped bait totally ignoring the chocolate bar baited traps….Every bit of dropped bait was eaten before the largest rat scurried away and came back with a little bit of card smeared with mud. The card was dropped at my feet and to my astonishment it read “Fanx for the pellets… they were nice…”

Whether or not the last bit happened exactly like that I don’t really know but what I do know is that I will not be celebrating catches with black Absinthe at 160 proof anymore as the little black fairy that lives I the bottle is a real gobby oik and never shuts up talking. 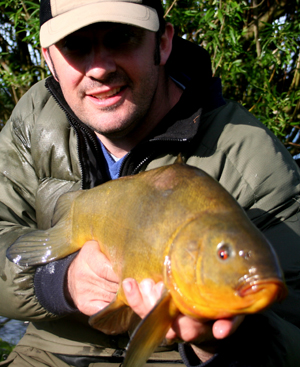 Soon after I had recast the bleeps began again and shortly before dawn I slipped the net under another tench that obliterated my Pb and went to 8lb on the nose! What a fish…Even the rats were impressed and gave me a round of applause.

Our trip down to Sywell had delivered the goods and another Pb had been broken, once again the trip was only possible due to the kindness of Mike Townsend who I wish to thank and the pulling power of Teme Severn baits which resulted in me catching two fish from a swim that has not produced a single fish in weeks!