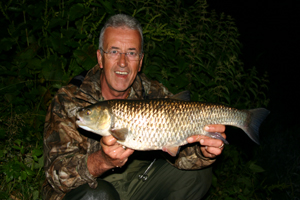 I must have had loads of fun in the first three weeks of the new season because the time has literally flown by. I mentioned in my last blog that I was making a series of DVDs with Stu Walker and this has taken up every spare moment of our time so far.

We kicked off on the Dove on opening day. Get this, we were filming so it was a case of us taking just one rod between us and then taking turns on the cameras. We were out before dawn to film the sunrise and mist in the meadows. Great atmospheric stuff but believe it or not it was 11am before I made my first serious cast.

The river was rammed with anglers who, judging by how they were roaming about and moaning(!), weren’t catching a great deal. Very few barbel came out that day but we’d done our homework and sneaked out three belters, the biggest being just shy of 11lb. Although I say it myself, the footage is awesome.

We returned to the same stretch four days later and got some more action in the can, and just to be greedy we went back on the first Saturday of the season and would you believe the car park was completely empty? Not another angler on the bank and that says it all really. Everyone had convinced themselves that the fish weren’t feeding but they were you know!  We had plenty of action simply by priming the right swims carefully, watching how the fish reacted and then placing our baits in just the right spots. Two hours preparing a swim and ten minutes fishing is all we needed to put a fish on the bank. There’s no point flogging the river because you’ll just spook everything in front of you.

Two days later we nipped up to the Swale; another river that, if you went by the reports on the Internet, was fishing crap. We had a barbel on the very first cast and went on to film eight more. On top of that we lost two fish in unseen snags but that’s something you can do little about on spate rivers like the Swale. One day you can fish in a completely snag free swim, a drop of rain and a ten-foot flush later and you’ve no idea what’s lurking out there in the water. Whole trees can get swept down the Swale, not to mention the odd fence or two.

The Swale fish were of a surprisingly good average size, too and that had us thinking about a return sometime.

The following week we filmed on the middle Trent with Lee Swords and that was an eventful trip. Lee caught loads of barbel by piling bait into a classic holding swim. He must have caught a dozen barbel during the day plus a few cracking chub. When darkness fell Stu went home but I fished on into the dark. Although I was only about thirty yards above Lee I really struggled to catch barbel. I did get a few but the chub wouldn’t leave me alone. Mind you, with chub averaging 4lb plus you don’t complain. My best brace topped 5lb, the biggest individual fish weighing in at 5lb 4oz, a fish that I might add will push 6lb come the winter. Summer chub tend to be pretty hollow but this one had a right old frame on it.

My next trip was to the new CEMEX water on the tidal Trent. The day started well with a barbel first cast. I then had problems with snags and started to lose tackle at an alarming rate. The tidal can be like that as there are huge rocks strewn everywhere and things aren’t exactly helped by the fact that as the river has cleaned up there are some massive weed beds that you simply can’t see deep down in the depths.
Eventually I found a nice clear patch and went on to net half a dozen more fish before packing up at tea time.

I love it when you can catch during the day and some people get it into their heads that barbel are nocturnal when they clearly are not. Like anything else, if you feed them properly they are catchable at all hours. They’re just easier to catch when dusk falls. Some call it the ‘Noddy’ hour…

And then we dropped back to the Dove again to shoot a feature with Greg Whitehead from the Angling Times. He’s seen a bit of our footage and is keen to cover our progress in the paper. Like I’ve said elsewhere, the underwater footage we have shot is truly stupendous and you won’t believe how close we’ve got with a camera to a shoal of feeding barbel.

The shoot went remarkably well. We promised Greg that we’d catch a fish within ten minutes of his arrival. When he got there he decided to put the kettle on to which we said, “Oh no! This swim is primed and ready, can’t you wait ten minutes?”

I’m not sure he believed us but I turned to Stu after 4 minutes of fishing and said something along the lines that it was a bit slow and I was getting twitchy. I needn’t have worried because thirty seconds later the rod hooped over and we had Greg’s barbel. Into the river we jumped and the caera clicked away merrily.

Greg was a happy bunny but we promised to swap over and do it again. Sure enough, we baited, waited and then walloped out another cracker.

“Come on Greg, it’s your turn now!” And we took him to a favourite swim that most folk overlook. Sometimes the best swims are either hidden away or look nothing to the untrained eye. We baited, we waited again, Greg insisted on using his own rod and a centrepin reel. A little underarm flick placed his rod in exactly the right spot and it wasn’t long before he was hanging onto his tackle for dear life as a big old lump tried to find sanctuary in the streamer weed.

Eventually his choice of 12lb line began to have an effect and a big flank flashed beneath the water. At this point Stu and I could see he’d hooked something quite special, certainly it was a double to say the least. We duly netted her and left the fish to rest in the deep mesh of Stu’s landing net. I readied the unhooking mat and sling, zeroed the scales and prepared the cameras.

Greg was a bit excited at this point as he suspected he might have a new PB. We on the other hand were absolutely certain he had! Sure enough at 11lb 10oz it was a new PB by some margin and it was a perfect specimen to boot.

After that we jumped in the car, stopped off for a quick bite of lunch and then headed over to the Upper Trent. Alas the amount of weed coming down made fishing almost impossible so we dropped back onto the lower Dove where we trundled bits of free-lined meat around in the hope of a barbel but in reality the likelihood was that we’d catch chub, and so we did. Fish to 4lb 10oz came on this simplest of methods and it was a great way to round off a fantastic day.

Did I mention that it rained on and off? No, I guess not, because when you’re having this much fun you hardly notice, do you?

Well, I’m back on the Trent this Saturday, doing a feature on the upper Idle with Kev Green on Monday and then it’s an early start on Tuesday when I’ll be nipping down to the River Wye for a spot of chubbing with Peter Smith, who owns the Caer Beris Manor hotel at Builth Wells. If the chubbing goes to plan (guests at the hotel can fish the Irfon and the Town Waters of the Wye free of charge by the way and the fishing can be fantastic) we might even have a try for a barbel on Thursday morning at one of the Wye and Usk Foundation beats.

Crikey, where does the time go? I promised to share a trip with old Skoylesy when I retired but I’ve never been quite so busy. Never mind, I’ll fit one in somehow.

Till the next time, tight lines and good fishing.