Welcome to a bumper edition of the Blobbylog! Before I get to the fishing I’d like to kick off with a bit of ying-yang.

First the good news. The latest web stats reveal this web site received more than 14,000 hits in the past month alone and the figures are steadily rising. I’m also getting loads of emails from the site, too, which I do my best to answer in the time constraints available, so I’d just like to say thank you to each and every one of you who comes here because it makes all the hard work worthwhile.

And the flip side of that coin…

I’m not averse to a bit of banter or even direct criticism in the comments left by visitors. Okay some folk appear to get their kicks out of leaving abusive comments and within reason I allow them to stand mainly because it says very little about me and everything about them. They’re also in a tiny, tiny minority of something like one in a thousand which is like a gnat bite to an elephant.

However, I will not tollerate their use of swear words on this site or the personal attacks on those who have left positive comments. Not only is it out of order, it demonstrates complete ignorance by those who leave them and recently I have had no choice but to delete several comments and identify the IP addresses of those who left the comments as spam.

Some sites will tolerate abusive behaviour, in fact they’ll positively encourage it, so, if you cannot express your feelings without using swear words or being rude then please do it on one of those sites rather than this one. I’ve far better things to do than to delete your childish taunts. 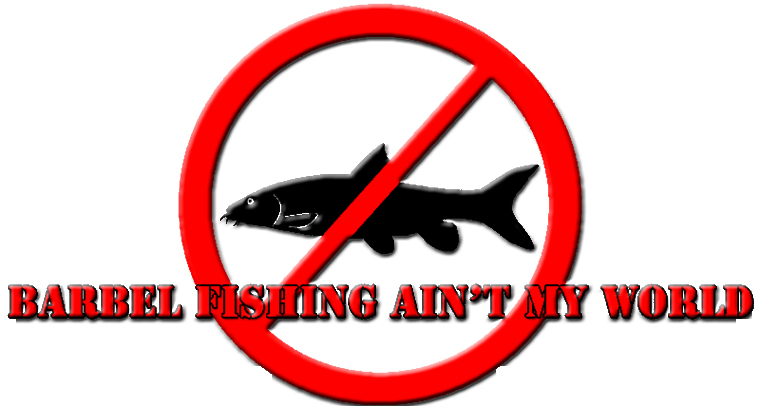 A good suggestion would be the BFAMW site where you can vent your fury to your hearts content.

For those who are not sure what BFAMW is then log on to: http://barbelfishingaintmyworld.yuku.com/forums/3/t/General-Discussion.html and check out some of the threads, but don’t come complaining to me about the content afterwards. You have been warned. Sometimes it is funny, often it is not and it is definitely not recommended reading for those of a sensitive nature!

Right now there’s a thread running called ‘The Post Count is S***!!!’ (They are my asterisks, by the way) in which posters bemoan the lack of site visitors so you’ll be doing them a big favour by visiting but do be aware that you’ll find some rather ripe language and notoriously politically incorrect views (and that’s putting it very delicately).

You might even recognise a few familiar pseudonym’s (or sobriquets?) that have posted comments on this site in the past…

Times They Are A-Changin’

It was good to get back on the Trent last week, even if it was for a brief visit but my enthusiasm was curbed slightly when I turned up to find the only angler on either bank was fishing directly opposite where I had planned to fish. You may recall that in a recent blog I’d said the fish were shoaling up tight and I’d seen three fish roll in the same vicinity. Well, that was in this swim. 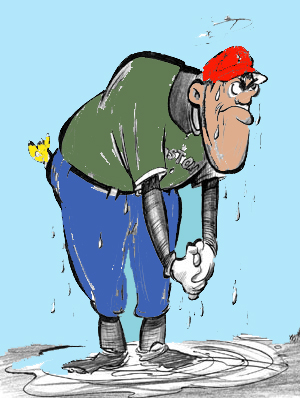 I know the Trent is a big old river but within reason I’ll always try and avoid fishing directly opposite someone. Mick Lomas was telling me only this week that he tries to avoid letting on when he’s catching fish because he’s sick and tired of getting splashed by barbel anglers’ feeders landing in front of him when hurled from the far bank!

So I dropped in a little distance upstream and set about baiting up. Now I have a theory that Trent barbel will hug the rocks because the rocks contain a lot of natural food in the way of shrimps and snails. It’s always a bit dodgy though and you can lose a fair bit of tackle – far easier to pick them off on a float, I guess.

Anyway, I picked out an area just 12 paces out from the bank. I know this because I paced the distance out on the bank behind me and clipped up the dropper rod so that my bait went in accurately and the two marks in the grass would enable me to drop my feeders bang on the money.

I’d nicely put in half a dozen droppers of hemp and pellet when I looked up and guess what? A massive gravel barge was bearing down on me.

I’m not too concerned by boat traffic but it can wash your bait around something rotten. This one swept by so close to the bank I could have almost touched it with my rod tip. The propeller must have been as near as damn it right over my bait and with the amount of water a loaded gravel barge draws I was left with a conundrum. How much bait had survived the passage? Not much, was my guess, but what had been introduced would have been spread far and wide. So much for concentrating my feed.

Oh well, nothing for it, I started baiting up again, from scratch. Other than moving there was little else I could do.

Baiting up doesn’t take that long and I then positioned two feeders as accurately as I could, one ‘in bed’, one directly below. When a bite didn’t materialise after 20 minutes I decided to reel in and re-bait.  The upstream rod was having none of it. My feeder was well and truly snagged and I ended up pulling for a break.

Now there’s nothing like losing everything first cast to put you on edge, well, nothing except getting snagged on the second cast as well. Oh dear! I was going to have to fish a little further out in an attempt to avoid the rocks. I wouldn’t have minded but the swim, indeed the whole river looked dead.

Then matey boy on the far side caught a fish. At least it would let me see where he was casting to and just as I suspected he was chucking two thirds over – pretty much where I would have been casting. Well, not quite, I’d have been nearer the rocks, losing tackle.

After two hours I was getting pretty much frustrated. I couldn’t buy a bite yet I knew I could be catching if I moved 50 yards downstream. Hey-ho. 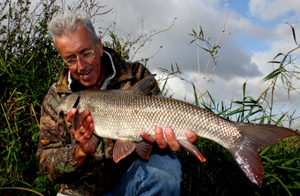 In desperation I put my upstream rod even higher up and further out on a seek and destroy mission and sure enough it produced a nice fish but that was to be my only fish of the session.

Meanwhile the fellow opposite who was taking turns with his wife to land fish was catching fairly steadily. Nothing spectacular just a fish now and then.

I was ready for hitting the road before the rush hour when a new face turned up on my bank. Seemed like a nice bloke even if he was a ‘Knight’…

We exchanged pleasantries and chatted for a while before he went to set up. Unfortunately his car had died, right there, next to mine. I offered him a tow but he said not to worry, he’d call his brother in the morning. Unfortunately he was in no mood to start carrying gear so he dropped in below me to set up which probably didn’t go down too well with our friends on the far side.

The thing is, and this applies to everyone on the river, you’re only entitled to the water up to half way across from your bank. Cast further than that and you’re effectively poaching someone else’s water so you’ve no real room for complaints, eh?

Put Your Trust In These Guys

I’ve been somewhat dismayed recently by the reaction of some folk to the Angling Trust’s band of luminaries who were recruited to raise its profile. I’ve read through some of the threads on various web forums and you could be forgiven for thinking that the ‘magnificent seven’ and fifteen others were replacing the Trust and being paid handsomely to do so. 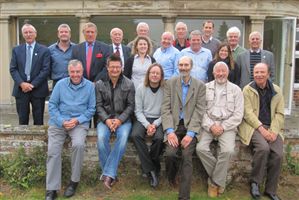 They have volunteered to support the Trust and if that group doesn’t include a dedicated minnow specialist then that’s no reason for the minnow anglers of the world to rise up and protest. These volunteers can advise the Trust, yes, and they can make suggestions but they’ll have precious little impact on policy. Their sole responsibility is to see that the Trust survives because without it we’re back to the dark ages.

Instead of defending their own corners I would love nothing more than the PAC, the Zander Club, The Barbel Society, The Barbel Specialists, The Tenchfishers, The Perchfishers, Carp Society and whichever self interest group you care to name would get off their high horses and commit their group wholeheartedly to the Trust.

If that means raising subs to create a support fund, fine. If the caveat to handing over that money is you demand a representative among the elite supporters then equally fine, but put your money up first and THEN demand your pound of flesh.

As far as I can glean the team of 22 advisors is giving their knowledge, experience, expertise, or call it what you like, completely free of charge. They pay their own expenses to attend discussions and they do so in their own time.

How anyone can condemn that is beyond me.

To lay down an agenda demanding special treatment and protection of specific practises at this juncture is completely pointless because they might go down that route with or without you. At least with you involved you get an opportunity to influence policy.

But all this is just muddying the water. The big guns are there in order to raise the Trust’s profile, to advise and to promote and to attract the common man. At least they are trying to do something constructive. What are you doing? Are you a member yet?

These 22 anglers are described as ‘movers and shakers’. What words would you use to describe those who post their intransigence and negativity on web forums?

And it’s simply not good enough to hand over £20 and then say, ‘Now go away and cure world famine…’ We should all be seeking ways where we might be involved, even in the smallest way.

Sorry folks, I seem to have jumped on the old soap box there for a minute. Let’s lighten the moment with this little gem I culled from Fishing Magic’s Bait Box section. Apparently someone had written in to Radio Leicester with a dedication request. I can’t believe no-one spotted it but maybe that’s down to the dumbing down of both the content and those who make programmes these days. Positive discrimination has a lot to answer for! 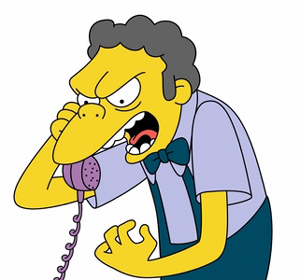 Either that or maybe folk in Leicester miss the point completely when Bart Simpson rings up Moe’s bar and says, ‘Hi. I’m looking for a man, first name Hugh, last name Jass.’ To which Moe then shouts out, ‘Ok, has anyone seen a Hugh Jass? Hello, I’m looking for a Hugh Jass!’

That was good but it was a cartoon. It was fiction whereas this is a classic, no doubt destined to be aired at induction courses for prospective radio presenters and producers until the next Millennium. This is the BBC falling for a gag – hook, line and sinker…

And the blog continues here: