Lee’s On A Mission – but as usual he get’s distracted (it’s the whisky, you know).

By the time you have read this I will have caught a 20lb carp…, I hope. Well that’s the plan anyway! I am becoming a ‘Carp Angler’ and will have done a fair bit of carping by then and that being the case the odds should be well in my favour as the venues I have chosen to concentrate on actually hold a fair head of carp to around the 40lb mark, although I don’t want one quite that big just yet… let’s learn how to walk before I start running.

I have already done a couple of day sessions with very little in the way of action apart from one skittish run that I missed and one massive lump that did me on a submerged snag – which did nothing to improve my mood at all.

The one thing I have noticed in carp fishing however is the total and utter preoccupation with rigs… I use some outlandish set-ups for barbel from time to time involving several types of hook length that are nailed down and joined together with blobs of Kryston rig putty and the occasional swivel but the bivvy-boys take it to another level altogether. 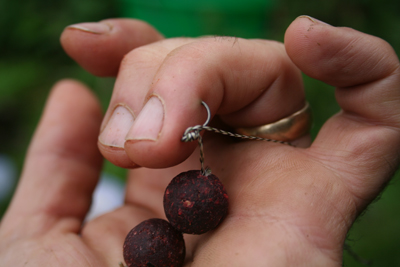 They have rigs where they don’t even tie the hook onto the line, they attach it via a swivel so that it can rotate 360 degrees, now I am not going to fanny around that much as I cannot see the point on the venues that I have chosen to fish because they have more than a single fish in them and I will not be fishing sessions that last several months therefore I will not be needing to pass my time inventing ever more sophisticated methods of fooling what is in effect a waterpig whilst at the same time impressing my bankside carp buddies.

Not that they would show that they were impressed as a lot of carpers that I have come across seem to fall into two main camps the “Grunters” and the “Stoners”. 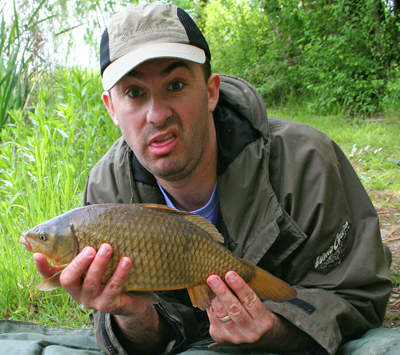 F1's Aren't Even A Species!

The “Grunters” seem to have devolved the ability to speak with more than one syllable; they also do the John Rambo thousand yard stare way more than is necessary, trying to get anything out of this lot is almost impossible (unless you tell them you are after bream and tench whereby they do improve somewhat and open up abit)

The “Stoners” on the other hand are a far more amiable bunch, unfortunately they do on occasion get right on your wick as they are loud and gregarious in nature as the burn their daily allocation of medicinal marijuana and consume their preferred libation of White Lightening Cider. They will tell you the story of the big fish that came out last week and they will show you what bait they are using… but for God sake do not let them know you have a mega pack of king sized Mars Bars in your packing up because if they run out of weed and get hit by a dose of the munchies at 2am they will come at you like a rabid pack of wild baboons.

Your only defence from this munchies attack would be to throw them the Mars Bars and try to persuade them that burning banana skins in Rizzla’s dipped in corn steeping liquor will give them an awesome legal high. My advice after that is to get the hell out of there as soon as possible before they realise CSL doesn’t burn very well and banana skins possess no medicinal or recreational qualities whatsoever.

There are also some other smaller sub-categories of carpers that one is likely to run into from time to time. One such type of carper is ‘The Caravan Commando’. Now these are not what you could class as rare but they are a very easy to overlook subspecies that tends to go unseen as they have completely taped over everything in their possession, including their two-berth caravan, in Realtree sticky tape.

I myself once cameacross one of these at the A1 Pits venue several years ago, a man so perfectlycamouflaged he only gave away his position because he was so troubled by his situation. I enquired as to what was upsetting him and found out that he had been visited the night previous by a marauding pack of “Stoners” who had been alerted to his capture of a mid-twenty by the gentle warbling of his Delkim TXi’s. It had all gone very well with the weighing and picture taking however it all went wrong shortlyafterwards when they made him a hot mug of celebratory mushroom tea. 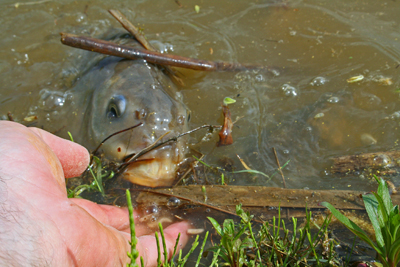 Carp Can Be Proper Daft...

Soon after they moved on he noticed that his bait boat had turned into a fat black cane toad that had tried to bite him, his spod rod had turned into a huge writhing anaconda and his spod mix was made up of millions of little Michael Flatley-like people that were dancing like maniacs to Irish Folk Music and to make things worse he now realised that he could not find his arms and legs in the undergrowth.

After assuring him that everything was in order and telling him to take off his Real Tree outfit whereupon he found his missing limbs within a tangle of nylon nettles and gortexcrack willow shoots. Once again reunited with his extremities he seemed to recover somewhat and retreated to his leafy nest site to get a bit of sleep within his Fern patterned 4-season cocoon sleeping bag.

Another sub-species one should always expect to find is the ubiquitous single water expert or as the scientific fraternity would have them labelled the magnus caputcapitis or ‘big head’. These are quite harmless just so long as they do not feel threatened so avoid any direct eye contact and listen patiently as they sing their rather monotone territorial display song. Once they have done that they will move off as they have a very busy schedule which includes urinating on all the peg markers and ensuring that everyone knows that they are aware of every bar, weed bed, drop off and mussel colony. 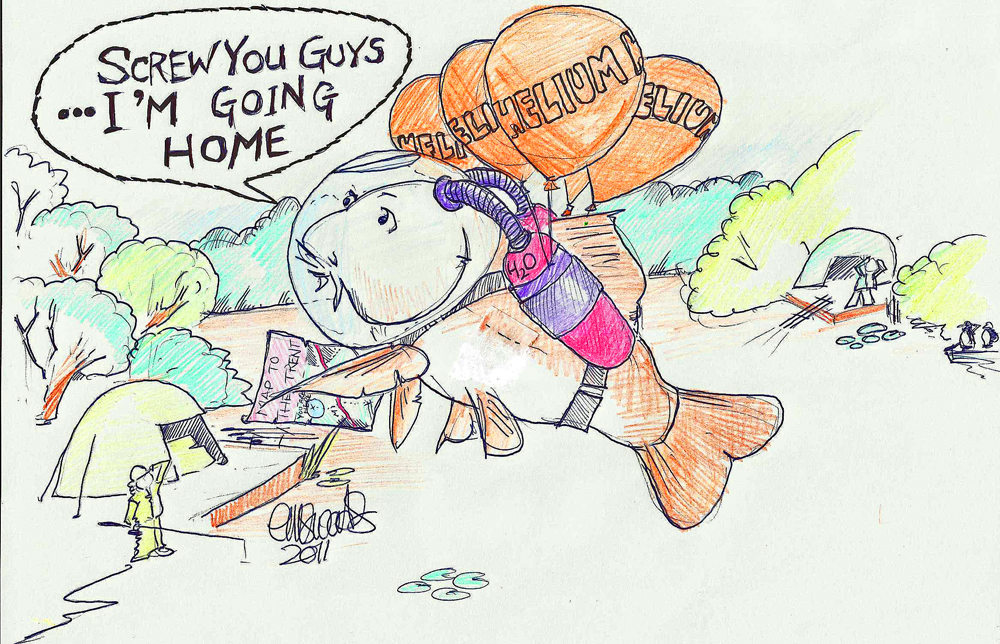 The other category of carper that occasionally shows its face is the dreaded ‘Night Walker’ these are the scourge of all the sub-species of carper as they do not fish for the love of fishing rather they are as vampires that drain the very life blood from the waters that they illicitly frequent. These expert anglers could, if so possessed of the idea, catch a fish from a bucket. Theyswoop in unseen under the cover of darkness whereupon they remove their prey and return it to their own lakes so that they can fish for it at their own leisure, time after time after time. The Night Walkers are not interested in anything less than 20-pounders so those waters that are not in possession of such creatures generally escape their attentions. 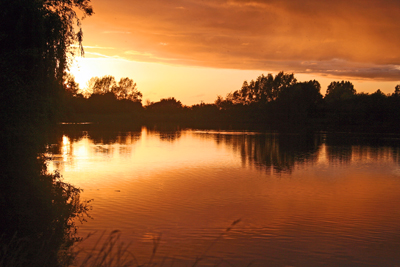 Sunset Is When The 'Night Walkers' Emerge

Car keys must be handed over, night sessions pre-booked, names taken and boots checked as well as gates being locked and wild garlic growing within the boundary hedgerows (You didn’t think that stuff got there by accident did you?)

And as with all things of late the carping fraternity now has another species to contend with, one that has migrated into the UK as it sought to enlarged its original territory and one I found whilst fishing on the tidal Trent… the barbeque-loving ‘Carperovski Nospeakenglishii’.

Now these are a much misunderstood sub-species of the “Grunters” that have traits of the “Stoner” and the aggressively territorial “Bighead”. They take some getting to know but they are ok… I have two as friends in Tomas and Slavic. And more importantly they are harmless just so long as they can purchase their preferred BBQ food from the fish counter at Tesco Asda and Morrisons so don’t have a hissy fit when you see one or two coarse species for sale on the ice-covered fish slab. That is the better option because the other one is that they will begin to display traits of the ‘Night Walker’, however they will not be returning the fish to their own waters, rather they will separate fillet from bone and place the succulent curds upon the glowing embers so that they may feed their friends and families. They have a taste for the earthy and their appetite is gargantuan.

In fact given the choice I would rather see an otter on my fishery than a pack of hungy ‘Carperovski Nospeakenglishii’!!! 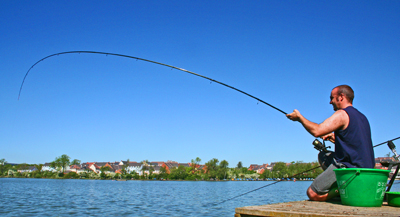 Come and stop me if you can :O)

My bet is the winner will be DVSG :O)

2 thoughts on “Lee Swords On Carp And Carp Anglers”