Ah well, it’s almost Santa Time and for some that means a week off work and lots of time to go fishing. For me it’s a chance to spend time with family and friends – the fishing can wait. Well, I might sneak out the once but I have to confess my diary is looking pretty full. 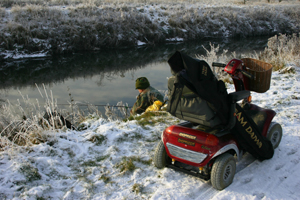 To be honest I’ve only managed one trip since the last blog and it was a bit of a mixed bag. It had been my intention to target roach on the stick. Simple tactics, half a pint of casters and a chance to play with the new Adcock Stanton ‘pin’ again. I love pin fishing and this new reel is inspiring me to get out and use it more often than I might have done.

I wasn’t expecting much as the weather had fluctuated between dreadfully cold and sudden heavy rain so extra water was on the cards and a slightly coloured river at that. Why I went for casters I’ll never know because it was an out-and-out maggot river. Very coloured in fact. But I was fishing for fun, on my own terms, so who cares?

I kicked off in the nearest swim to where I managed to park my van. It looked perfect with the main flow pushing across to the middle and far side. As I tackled up a pike struck in the nearside eddy and I thought, hello, guess who’s toting a pike rod today? All I need is a decent roach and you’re mine sunshine! 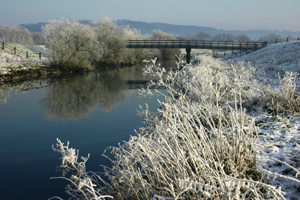 Well, try as I might I couldn’t touch a roach. Bleak, yes. Almost a bite a cast, but no roach. I plugged away for an hour to no avail and decided it might be worth dropping a little further downstream. Not too far mind as I’d seen another pike strike and I wanted to be in reach of both fish.

Again, nothing but bleak. It was beginning to look grim. So I moved again. This time I went 50 yards downstream towards a slight bend. First cast another bleak. Oh dear. But after ten minutes of endeavour I had my first roach. I knew there were a few guys fishing about a quarter of a mile upstream and decided that it was now or never. Time to make a quick recce and see if I was just in a bad area.

Before I reached them I could see they were bagging. Bite a chuck stuff, or so it seemed to me. And yes, they were catching on maggot. “Come and join us, they said, there’s roach topping higher up…” He said, pointing a hundred yards above him. For some reason I decided not to bother. What I needed to know was were the fish feeding and the answer was yes. That meant I could work along my own area and look for a few fish knowing that if I found them they’d be catchable.

Back I went with a big shot of inspiration in the locker. Out went the float, away ti went down the swim and then it promptly vanished. 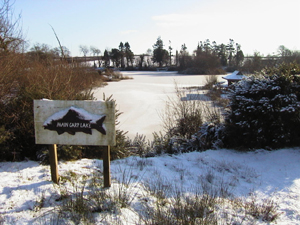 Don’t you just love that sound? The one that says you’ve just hit a cracking roach. And do you know, that was the start of two very special hours where I had a bite every cast from what I deem to be quality roach in the 3 to 6oz bracket. Nothing bigger, nothing much smaller, just nice, obliging, pristine roach. For me it doesn’t get much better and it wasn’t long before I was in the zone, knowing when to feed, where and how much. Where I dare land the stick so it didn’t waste time trotting down five yards of empty swim.  It was almost a case of casting down to the fish to save time and boy, was I motoring.

I was putting together a very nice net of roach when the casters ran out. Oh dear! Still, I knew that was always likely and I did have a pint of grotty old maggots in reserve. They’d been in my bag since last week and they weren’t too clever but when needs must you use what’s available.

So I switched to maggots and guess what? Although I was still able to get a bite a cast the profile of the swim changed instantly. Instead of the fish being 3oz upwards , a fish of that size was now a good ‘un. I was suddenly pestered by 1oz fish and bleak. I’m sure they must have been there all along but the caster seemed to get through them. 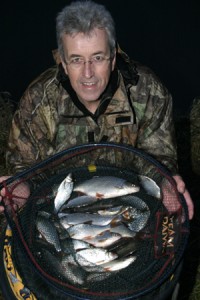 I gave it another half hour and was just about to call it a day when I snagged up. That’s odd, I thought. So I leaned on the snag and it lifted in the water. Oh, a branch, I thought, as it slowly raised from the bottom. And then it just drifted across the river. This was no branch, it was a pike, and a big one at that. It hadn’t taken a roach, so I’m guessing it either snatched at the maggot or I foul hooked it. Alas, the hook link gave under pressure but it certainly felt like a fish worth trying for again sometime.

And guess who got so wrapped up in his roach fishing he never chucked out the pike rod all day?

So there we are.

I was going to have a pop at certain Internet warriors from a well known but sadly endangered fishing forum but decided not to bother. It’s the oxygen of publicity they crave, what makes them feel important, and why should I give them that. One guy even posted a thread accusing me of criticising the film making of Hugh Miles last week. It was a complete pack of lies and if you doubt that, check out the first part of my December Blog where I actually applaud Hugh’s work. That’s the piece this guy reckons is critical.

Ah well, at least the moderators acted this time because that was bang out of order – but not a surprise by any means.

I’ll close by thanking everyone who has bought the Barbel Days And Ways DVD. We sold out of the first pressing much quicker than we dared hope and there’s just 85 left of the second pressing. Thing is, there’s a fair few anglers out there who probably don’t even realise they’ve got a copy coming their way yet because around a third of copies have been ordered by females. I’m guessing there will be a lot of anglers watching our barbel film after the Queen’s speech.

That’s just what you need, eh? A big dose of Swordsey to put you to sleep! Enjoy it folks.

Have a good one