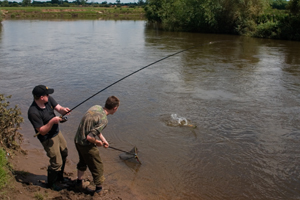 Sometimes we take our fishing far too seriously. Many anglers measure their enjoyment purely on the size of fish they catch and if you ask me that’s a recipe for burn-out if you’re not careful. One of the things that we all agree about in the DVSG is that our fishing has to be fun. Okay, we’ve built quite a reputation for catching big fish in a relatively short space of time but if you think that’s what we’re all about you would be seriously mistaken.
Earlier this summer Matt Brown and I agreed we really fancied spending a few hours on the Dove. We only had about half a day to spare as I needed to be home by early evening. That meant we would miss both key feeding times – dawn and dusk – but that didn’t bother us in the slightest. It’s just a pleasure to fish on a river like the Dove.

Adam Roberts decided to join us but chose not to bother bringing gear knowing full well we’d take pity on him and let him have a go with ours.

Although the river had returned to something like normal level after the disastrous early season floods, getting to it proved trickier than we anticipated. The stretch we intended to fish was completely inaccessible as the fields leading to it were still flooded. The next stretch was also tricky to get to because the access road was awash but that’s where Adam came in really useful. We made him wade through the water ahead of us to check the depth!

Not surprisingly we had the whole river to ourselves so we headed down to the lower end of the fishery. Our plan was to roam and this way we’d end up near the car towards packing up time.
With a mile or so of river to play on you might be surprised to hear we began fishing twenty yards apart. I think that gives you a clear idea of how laid back we were about things. The swim, on the outside of a ninety degree bend has a deep gulley under the near bank. Six feet out it’s the best part of ten feet deep over hard packed gravel and there’s a shallow rapid just fifty yards below. It’s the most perfect looking barbel swim you could imagine but I’ve yet to catch one from it.
I took the downstream station, a spot that is normally good for a chub or two and it didn’t let me down. A couple of casts was all it took and I was into a spirited chevin. I popped it back and moved on straight away in order to give Matt a better chance of catching. Maybe he’d break its barbel duck because I’ve lost count of the number of times it’s let me down.

In any case I really fancied trying a swim just above the lower boundary. It’s another swim with a bit of chub form but you have to take care with the barbed wire fence. This swim is another near side banker. Shallow across with a vertical clay bank dropping into five feet of water on the inside, it made sense to bait an area well down from where I would be sitting. As I was likely to spend no more than half an hour in the swim there was no point in piling in a load of bait. I gave it a couple of bait droppers containing pellets and hemp and that was enough. Then, rather than fish it straight away, I chose to drop into another nearby swim for  10 minutes while things settled down. Targeting a nearside bush that overhung the water I swung out a couple of hair rigged pellets. This was a one-bait, chuck and chance cast but the key was to present it in exactly the right place. A quarter ounce bomb meant my rig would roll round beneath the bush and sure enough, the rod tip wrapped round right on cue. Unfortunately I struck into thin air. I gave it another cast to no avail and it’s times like this that you must remember that ‘Plan A’ is the baited swim, not this one. Don’t lose track of time chasing rainbows. Keep an eye on the time and head back to the pre-baited swim in your original time frame.

Approach is everything when you fish these small rivers. Once you’ve got a shoal of barbel feeding properly they are stupid! You can stand on the skyline, wave your arms about and drop a lead right in their midst without giving them a moments concern but if you are just out to mug one here and there you must creep about quietly.

In commando style, crawling on all fours, I ducked beneath the barbed wire and slid below the skyline. Using exactly the same rig as earlier, I swung it gently towards the far bank about four yards downstream of where I intended to fish. By sweeping the rod high and trapping the line as the rig hit the water I was able to cushion the splash and cause the lead to swing across the current in an arc so that it came to rest exactly where I wanted it, hopefully without spooking anything that might be feeding on the free offerings.

Out of the blue the line tightened across my fingers and a smart strike set the hook. Alas it was a cracking chub rather than the barbel I was hoping for. Fortunately Matt turned up right on cue to photograph it.
It was Adam’s first visit to the Dove and the magic was already working its spell on him. He was falling in love with it and he wasn’t even fishing!
My swim warranted another cast but Matt and Adam decided they were going to head on upstream. I topped up the swim and then gave it a good rest. Somehow I knew this swim owed me a barbel so I switched on the radio and sat back to wait.

I love fishing on Saturday afternoons when there’s football on the radio. The previews, round the grounds, interviews, goal flashes, results, tables, phone-ins, controversy, wind-ups, Saturday has it all. We even get early kick-offs and a tea-time game for good measure. When I think back, football has caught me loads of fish because it’s kept me going long after I would have packed up on a midweek day.
Time for a recast. Same bait, same rig, same place.
Pluck! Steady Bob…
Pluck!
Wham!

The rod tip jerked round and stayed round. I found myself automatically reaching to tighten the drag as the clutch chattered delightfully. This wasn’t a chub.

Other than a few dives at the marginal vegetation the chub had offered few problems but this fish was in a different league, taking full advantage of the heavy current, hanging deep and taking line pretty much when it wanted to. Although I always felt in control I was glad of the extra power the prototype 2.25lb Infinty offered me. This is going to be some rod when it hits the market, classy looking, slim, light and much softer than a 2,25lb carp rod but with much more bottom end power than a typical barbel rod.
The fish boiled on the surface and my first reaction was to grab the mobile and punch in Matt’s number.
“How far away are you? I’m into one and it looks like a double.”

Matt was miles away so I concentrated on landing the fish, trouble was, I couldn’t drag the fish up against the current without risking a hook pull. Patience is a virtue in these situations and it’s a case of simply coaxing the fish upstream, applying gentle pressure, keeping the rod low and gently leading it until your rod is parallel with the upstream bank and the fish is above you.
The skilful bit is to grab the landing net, put it in position and then turn the fish so it comes downstream on the current to your net. Unfortunately I could barely hold the net out in the current and it took three heart stopping attempts to get her in. Each time she had to be coaxed back above me while I fretted about the hook hold. Didn’t want to lose her at this stage, did I?

Everything went to plan and Matt soon arrived, camera in hand. Funnily enough the barbel had done what lots of fish do if you retain them in a landing net for a while, it shrunk! What had at first felt and looked every ounce a double was now a nine and probably getting smaller by the minute. If we didn’t get the pictures done pretty sharp it would end up a seven at this rate.
Not that I was going to bother weighing it.

Pictures taken, Matt and Adam on their way back to their swims, I had one last cast. Well, it would be rude not to, wouldn’t it?

Of course, nothing happened. Baiting like this is all about one swim, one fish in the shortest possible time. Had I baited more heavily and been prepared to remain in that swim all day I’m pretty sure there would have been more fish to be had. But that wasn’t my plan.

I gave it twenty minutes and then headed upstream to join Matt and Adam who had stationed themselves in a wide swim with lots of features. I left my gear up the bank and joined them for the crack. It took me back to the days when I fished as a kid with a bunch of mates at Toll Bar Pond. Three of us would fish the same swim, floats no more than a foot apart, gambling on who would catch the next suicidal perch.
I fished with Peter Clapperton a few years back on Mille Lacs Lake in Minnesota. We were trying to catch some big carp and old Pete was like a whippet. He’d happily strike any run on any rod and if you wanted to catch a fish on your own gear you had to beat him to the rod!

Today we let Adam have the next take and, blow me, he only hooks a mirror carp!

Alas it came off at the net to much jollity. It was that kind of day. I hung around while Matt and Adam managed to nick the odd chub and barbel before leaving them to fish a peg I fancied near the car park. It produced nothing but that hardly mattered. We’d had a good day and that’s what fishing is all about.