Well, I’ve survived another trip to India, but only just this time. I don’t know what it is about the place but it certainly brings out any ailments in me. I travelled to India with the tail end of a cold and I was pretty certain that it would clear up rapidly in the sunshine. After all, we were going to be out there for 17 days.

The cold just got worse. At first it was just a nuisance, a runny nose and a bit of a cough but it began to wear me down. I was exhausted and the fishing over there is extremely demanding. Coping with heat, rocks, climbing, trekking, getting up early every morning, the shortage of sleep all made me question why the hell I was there. 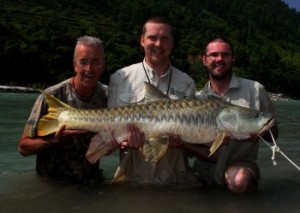 The first week dragged by with a few fish to show for my efforts. James had scored big time. It was his first ever mahseer trip and he’d had two huge fish in his first 24 hours, both over 40lb, the biggest a whacking 45. That’s how it goes sometimes, I guess.

Alas the two biggies were one-offs and although there were a few fish around to be caught they were mostly tiddlers up to about 6lb or so. Believe me it’s tough going in the North and this was the absolute optimum time to be there. We had planned to spend up to 6 days at Pancheshwar and then raft down the Kali river, fishing here and there. The Kali was still flooded following the monsoon which had subsided and then risen again. Our chances of catching from it were slim and that worried us. Alas our plans could not be changed and we had no choice but to tough it out. 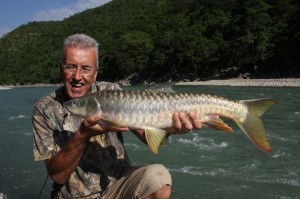 And boy, in my case I really did have to tough it out as abscesses had formed in my top lip and under my nostrils. Jeez I was in pain. Imagine the worst headache and throw in sinus pians, toothache and eyestrain. Then consider you’re a week away from the nearest chemist never mind a doctor.

I spent most of the following week sheltering from the sun and feeling pretty sorry for myself. Unable to take much pleasure the spectacular white water rafting, the scenery or the wildlife. This was purgatory for me. Stu and James weren’t exactly having much fun either as the fishing was hopeless with a raging brown torrent facing us each day and no signs of the river levels subsiding. 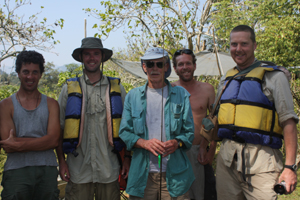 At one of our camps a small tributary flushed a narrow strip of clean water out into the river and it was from here we felt we had our best, if not our only chance of catching. As is often the case, luck runs with the lucky and James nailed a 29 pounder from here. I had a small one on James’ rod and that was about it.

We camped at Chukka for a while and it was there that James and Stu met up with the legendary James Moorhouse. Moorhouse is 71-years-old, has fished all over the world and is passionate about mahseer fishing. He’d fished the Ganges at Byas Ghat a week earlier before travelling to Chukka. The nearest road to the river is a 6-hour trek away. That’s dedication. Fortunately he had some antibiotic tablets and amazingly they were enough to get me up and running within 24 hours for the final leg of the journey. 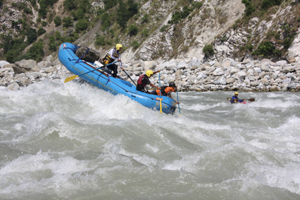 Ah well, some folk wonder how us travellers manage the transition between fishing in exotic places and then coming home. I can say, hand on heart that I couldn’t wait to get home and sort out my upcoming feature for Improve Your Coarse Fishing, a trip to a local reservoir with skimmer bream in mind.

I’d better not name the venue until the article comes out but it’s a large, open, shallow water and the wind was a howler. The only shelter available was in the pegs near the car park and these were fairly busy. I didn’t fancy fishing there as it’s not fair on the regulars if a cameraman starts wading around in the water, is it?

So I did the proper thing and fished like a real bream angler should do, teeth on into the wind. Boy it was wild, and remember, this was only a practise session. Well I struggled. And I mean really struggled. I needed an ounce of lead just to cast 30 yards. To land it accurately tested my skills to the limit and seeing bites was incredibly difficult. I say seeing bites but I didn’t have a sniff for two hours and went for a walk.

The guys in the sheltered pegs were struggling, too. But at least they’d had an odd fish here and there. So I went back, got my head down and fished hard. As is often the case when you rest a swim I had one first cast, a chunky skimmer. Then another on the second cast…

From then on I managed to get an odd bite here and there by twitching the bait but they were very ‘iffy’ bites. Nothing that you might call positive but by sticking at it and keeping things tight I gradually began to catch. When I’d caught ten I decided to stop and leave them alone. No point in hammering the fish if I was coming back on the morrow to shoot a feature. At least I could turn up feeling slightly confident but anyone who has ever done these features will tell you that it can easily go all so wrong.

The next morning I rose early, ate a hearty breakfast and jumped in the van. The engine kicked into gear, I hit the wipers and there was this awful juddering sound as rubber bounced across ice. Oh dear, say hello to Mr Frost. Don’t you just hate the first frosts? Nailed on to produce a hard day’s fishing on what was already going to be tough.

And amazingly the wind was still blowing a hooligan.

My old mate Trevor Empson had agreed to fish with me for a bit of moral support but he was due to endure a torrid day. The temperature rose a few degrees and the wind stepped up a few knots, smack in the kisser! Welcome to winter.

Bites were absolutely at a premium but it was a case of getting my head down and concentrating, offer up the odd prayer and make sure I made each bite matter. As ever in cold conditions, small baits, small hooks were the order of the day, small bites needed to be met with controlled strikes.

It wasn’t easy but another 10 skimmers provided the cameras with more than enough to make what I hope will be a cracking feature.

And that was about it for October.

See you next month.