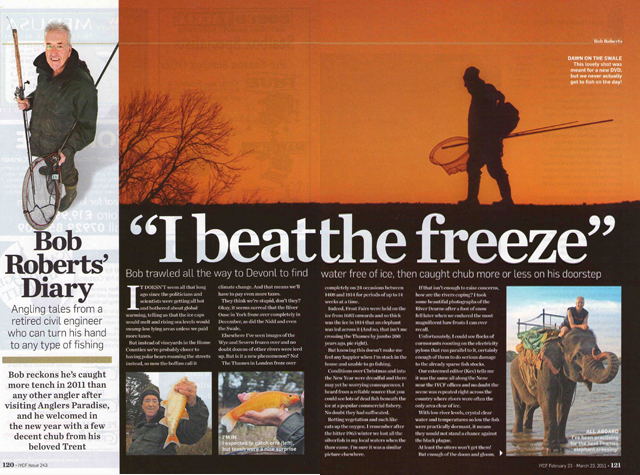 It doesn’t seem all that long ago since the politicians and scientists were getting all hot and bothered about global warming, telling us that the ice caps would melt and rising sea levels would swamp low lying areas unless we paid more taxes. However, instead of vineyards in the Home Counties we’ve got polar bears instead, so now the boffins call it climate change. And that means we’ll have to pay even more taxes.

They think we’re stupid, don’t they? Okay, it seems surreal that the River Ouse in York froze over completely in December, as did the Nidd and the Swale. Elsewhere I’ve seen images of the Wye and Severn frozen over and no doubt dozens of other rivers were iced up. But is it a new phenomenon? No!

The Thames in London froze over completely on 24 occasions between 1408 and 1814 for periods of up to 14 weeks at a time. Indeed Frost Fairs were held on the ice from 1683 onwards and so thick was the ice in 1814 that an elephant was led across it. 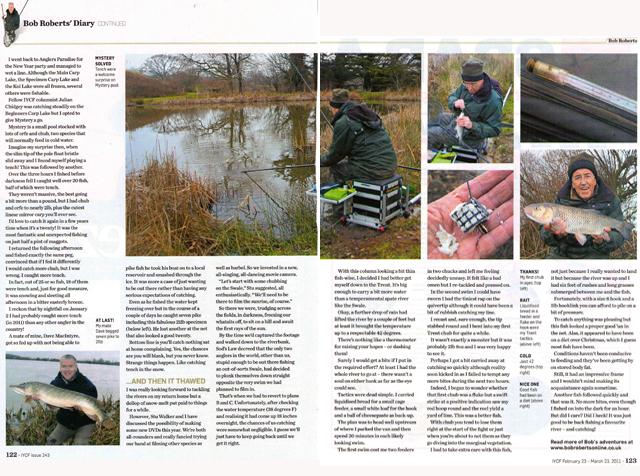 But knowing this doesn’t make me feel any happier when I’m stuck in the house and unable to go fishing. Conditions over Christmas and into the New Year were dreadful weather wise and there may yet be worrying consequences. I heard from a reliable source that you could see lots of dead fish beneath the ice at a popular commercial fishery. No doubt they had suffocated. Rotting vegetation and such like eats up the oxygen. I remember after the bitter 1963 winter we lost all the silver fish in my local waters when the thaw came. I’m sure it was a similar picture elsewhere.

If that isn’t enough to raise concerns, how are the rivers coping? I took some beautiful photographs of the River Dearne after a foot of snow fell and later when we endured the most magnificent haw frosts I can ever recall. Unfortunately I could see flocks of cormorants roosting on the electricity pylons that run parallel to it, certainly enough of them to do serious damage to the already sparse fish stocks.

Kev (the editor) tells me it was the same all along the Nene and no doubt the scene was repeated right across the country where the water was clear of ice. With low river levels, crystal clear water and temperatures so low the fish were practically dormant, it means they would not stand a chance against the black plague.

At least the otters won’t get them!

But enough of the doom and gloom. There were windows of opportunity to catch and it was a question of making the most of them. I went back to Anglers Paradise for the New Year Party and managed to wet a line. Although the Main Carp Lake, the Specimen Carp Lake and the Koi Lake were all frozen, several others were fishable. Fellow Improve columnist Julian Chidgley was catching steadily on the Beginners Carp Lake but I opted to give Mystery a go. 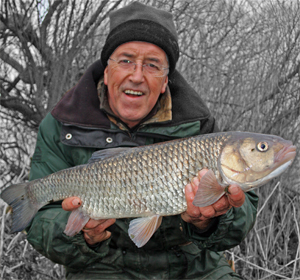 Mystery is a small pool stocked with lots of orfe and chub, two species that will normally feed in cold water. Imagine my surprise then, when the slim tip of the pole float bristle slid away and I found myself playing a tench! This was quickly followed by another.

Over the course of the 3 hours I fished before darkness drove me back to the villa I caught well over 20 fish, half of which were tench. They weren’t massive, the best going a bit more than a pound, plus I had chub and orfe to nearly 2lbs, plus the cutest linear mirror carp you might ever hope to see. I’d love to catch it again in a few years time when it’s a twenty! It was the most fantastic and unexpected fishing on just half a pint of maggots.

I returned the following afternoon and fished exactly the same peg, convinced that if I fed it differently I would catch more chub but I was wrong. I caught more tench. In fact out  of 25 or so fish, 18 of them were tench and just for good measure it was snowing and sleeting all afternoon in a bitter easterly breeze. I reckon that by nightfall on the 2nd January I had probably caught more tench (in 2011) than any other angler in the country!

A mate of mine, Dave MacIntyre got so fed up with not being able to pike fish he took his boat out onto a local reservoir and smashed through the ice. It was more a case of just wanting to be out there rather than having any serious expectations of catching. 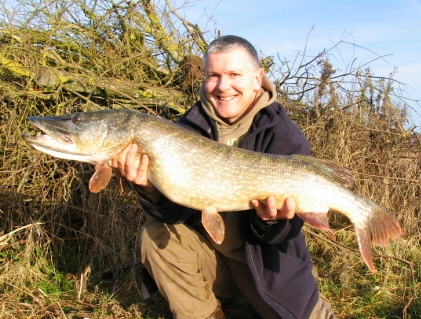 Even as he fished the water kept freezing over but in the course of a couple of days he caught seven pike including this fabulous 21lb specimen. He lost another at the net that also looked a good twenty. Bottom line is, you’ll catch nothing sat at home complaining. Yes, the chances are you will blank, but you never know. Strange things happen. Like catching tench in the snow.

I was really looking forward to tackling the rivers on my return home but a dollop of snow melt put paid to things for a while. However, Stu Walker and I have discussed the possibility of making some new DVDs this year. We’re both all-rounders and really fancied trying our hand at filming other species as well as barbel. So we decided to invest in a new, all-singing, all-dancing movie camera. ‘Let’s start with some chubbing on the Swale’, Stu suggested, all enthusiastically, ‘We’ll need to be there to film the sunrise, of course’.

So there we were, trudging across the fields, in darkness, freezing our whatsits off, to sit on a hill and await the first rays of the sun peeping over the horizon. By the time we’d captured the footage and walked down to the riverbank, Sod’s law decreed that the only two anglers in the world, other than us, stupid enough to be out there fishing an out-of-sorts Swale, had decided to plonk themselves down straight opposite the very swim we had planned to film in.

That’s when we had to revert to plans ‘B’ and ‘C’. Unfortunately, after checking the water temperature (38 degrees F) and realising it had come up 18 inches overnight, the chances of us catching were somewhat negligible. I guess we’ll just have to keep going back until we do get it right. 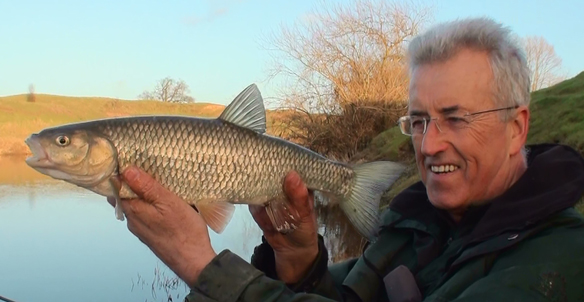 With this column looking a bit thin fish-wise, I decided I had better get myself down to the Trent. It’s big enough to carry a bit more water than a temperamental spate river like the Swale. Okay, a further drop of rain had lifted the river by a couple of feet but at least it brought the temperature up to a respectable 42 degrees. There’s nothing like a thermometer for raising your hopes – or dashing them!

Surely I would get a bite if I put in the required effort? At least I had the whole river to go at – there wasn’t a soul on either bank as far as the eye could see.

Tactics were dead simple. I carried liquidised bread to introduce as feed through a small cage feeder, a small white loaf for the hook and a ball of cheese paste as back-up. The plan was to head well upstream of where I parked the van and then spend 20 minutes in each likely looking swim.

The first swim cost me two feeders in two chucks and left me feeling decidedly uneasy. It felt like a bad omen but I re-tackled and pressed on.

In the second swim I could have sworn I had the tiniest rap on the quiver tip although it could have been a bit of rubbish catching my line. I recast and sure enough the tip stabbed round and I bent into the first chub I’ve had from the Trent in quite a while. It wasn’t exactly a monster but it was probably two-and-a-half pounds and I was very happy to see it.

Perhaps I got a bit carried away at catching so quickly although reality soon kicked in as I failed to tempt any more bites during the next couple of hours. 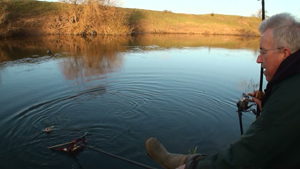 Indeed I began to wonder whether that first chub was a fluke but a swift strike at a positive indication saw my rod hoop round and the reel yield a yard of line. This was a better fish alright. With chub you tend to lose them right at the start of the fight or just when you’re about to net them as they go diving into the marginal vegetation.

I had to take extra care with this fish, not just because I needed and wanted to land it but because the river was up I had six feet of rushes and long grasses partly submerged between me and the fish. Fortunately with a size 8 hook and a 5lb hook link you can afford to pile on a bit of pressure.

To catch anything was pleasing but this fish looked a proper good ‘un in the net. Alas it appeared to have been on a diet over Christmas, which I guess most fish have been. Conditions haven’t been conducive to feeding and they’ve been getting by on stored body fat.

Still, it had an impressive frame and I wouldn’t mind making its acquaintance again sometime.

Another fish followed quickly and that was it. No more bites, even though I fished on into the dark for an hour but did I care? Did I heck! It was just good to be back.