By the time you’re reading this the curtain will have come down on another river season. Honestly, it steals up on us so quickly. We seem to spend an eternity stuck firmly in the grip of winter with weeks on end of nothing but frosts, ice and snow, and then for about three days the weather’s brilliant, the rivers fish their proverbial nuts off before someone pulls the rug out from under our feet on March 15th. That’s it you lot, put those rods away. Go on, bu**er off! 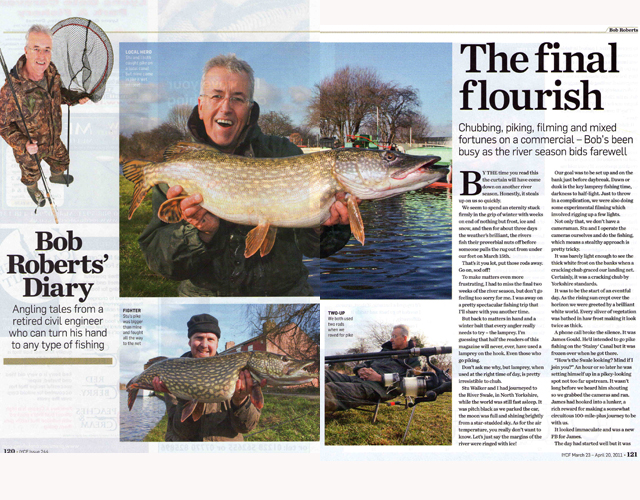 To make matters even more frustrating, I had to miss the final two weeks of the river season, but don’t go feeling too sorry for me, I was away on a pretty spectacular fishing trip that I’ll share with you next time.

But back to matters in hand and a winter bait that every angler really needs to try, the lamprey. I’m guessing that half the readers of this magazine will never, ever, have used a lamprey on the hook. Even those who go piking. Don’t ask me why but lamprey, when used at the right time of day, is pretty irresistible to chub.

Stu Walker and I had journeyed to fish the River Swale, in North Yorkshire, while the world was still fast asleep. It was pitch black as we parked the car, the moon was full and shining brightly from a star-studded sky. As for the air temperature, you really don’t want to know. Let’s just say the margins of the river were ringed with ice!

Our goal was to be set up and on the bank just before daybreak. Dawn or dusk is the key lamprey fishing time, darkness to half-light. Just to throw in a complication, we were also doing some experimental filming which involved rigging up a few lights. Not only that, we don’t have a cameraman, Stu and I operate the cameras ourselves, direct and do the fishing, which means a stealthy approach is pretty tricky. 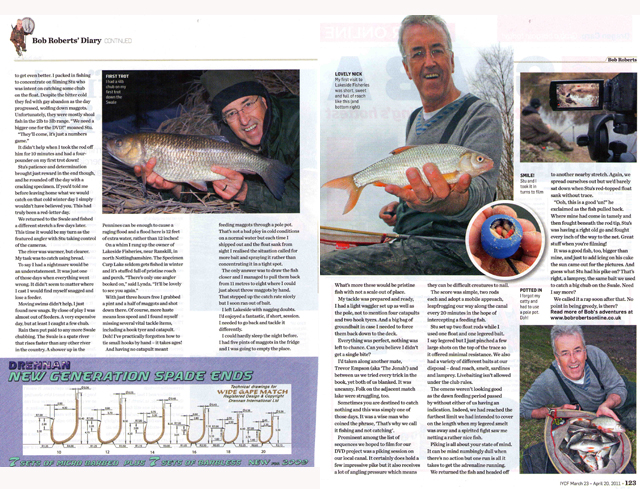 It was barely light enough to see the thick white frost on the banks when this cracking chub graced our landing net. Certainly it was a cracking chub by Yorkshire standards.

It was to be the start of an eventful day. As the rising sun crept over the horizon we were greeted by a brilliant white world. Every sliver of vegetation was bathed in haw frost making it look twice as thick.

A phone call broke the silence. It was James Gould. He’d intended to go pike fishing on the ‘Stainy’ Canal but it was frozen over when he got there. “How’s the Swale looking? Mind if I join you?” An hour or so later he was setting himself up in a pikey-looking spot not too far upstream. It wasn’t long before we heard him shouting so we grabbed the cameras and ran. James had hooked into a lunker, a rich reward for making a somewhat circuitous 100-mile-plus journey to be with us.

It looked immaculate and was a new PB for James.

The day had started well but it was to get even better. I packed in fishing to concentrate on filming Stu who was intent on catching some chub on the float. Despite the bitter cold they fed with gay abandon as the day progressed, wolfing down maggots. Unfortunately they were mostly shoal fish in the two to 3lb range. “We need a bigger one for the DVD!” Moaned Stu.

It didn’t help when I took the rod off him for ten minutes and had a four pounder on my first trot down!

Stu’s patience and determination brought just reward in the end though and he rounded off the day with this cracking specimen. If you’d told me before leaving home what we would catch on that cold winter day I simply wouldn’t have believed you. This had truly been a red letter day. 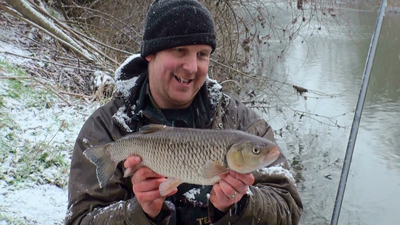 We returned to the Swale and fished a different stretch a few days later. This time it would be my turn as the featured angler with Stu taking control of the cameras. The river was warmer, but the river was clearer. My task was to catch using bread. To say I had a nightmare would be an understatement. It was just one of those days when everything went wrong. It didn’t seem to matter where I cast I would find myself snagged and lose a feeder.

Moving swims didn’t help, I just found new snags. By close of play I was almost out of feeders. A very expensive day, but at least I caught a few chub. 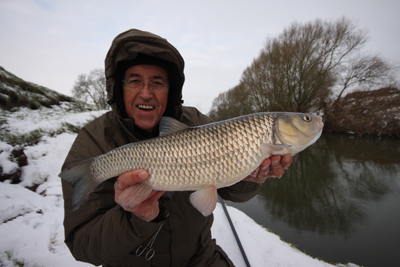 Rain then put paid to any more Swale chubbing. The Swale is a spate river that rises faster than any other river in the country. A shower up in the Pennines can be enough to cause a raging flood and a flood here is 12 feet of extra water, rather than 12 inches!

On a whim I rang up the owner of Lakeside Fisheries, near Ranskill, in north Nottinghamshire. The Specimen Carp Lake seldom gets fished in winter and it’s stuffed full of pristine roach and perch. “There’s only one angler booked on,” Said Lynda, “It’ll be lovely to see you again.”

With just three hours free I grabbed a pint-and-a half of maggots and shot down there. Of course, more haste means less speed and I found myself missing several vital tackle items, including a hook tyer and a catapult. Doh! I’ve practically forgotten how to tie small hooks by hand – it takes ages!

And having no catapult meant feeding maggots through a pole pot. That’s not a bad ploy in cold conditions on a normal water but each time I shipped out and the float sank from sight I realised the situation called for more bait and spraying it rather than concentrating everything in a tight spot.

The only answer was to draw the fish closer and I managed to pull them back from 11 metres to eight where I could just about throw maggots by hand.  That stepped up the catch rate nicely but I soon ran out of bait.

I left Lakeside with nagging doubts. I’d enjoyed a fantastic, if short, session. I needed to go back and tackle it differently.

“Hi Lynda, it’s me. Yes, I had a fabulous time. Would you mind if I had another go? Brilliant. I’ll be there on Tuesday.” 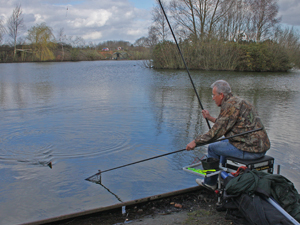 I could hardly sleep the night before. I had 5 pints of maggots in the fridge and I was going to empty the place. What’s more these would be pristine fish with not a split fin or scale out of place. My tackle was prepared and ready, I had a light waggler set up as well as the pole, not to mention four catapults and two hook tyers. And a big bag of groundbait in case I needed to force them back down onto the deck.

Everything was perfect, nothing was left to chance. Can you believe I didn’t get a single bite?

I’d taken along another mate, Trevor Empson (a.k.a. ‘The Jonah’) and between us we tried every trick in the book, yet both of us blanked. It was uncanny. Folk on the adjacent match lake were struggling, too. Sometimes you are destined to catch nothing and this was simply one of those days.

It was a wise man who coined the phrase, ‘That’s why we call it fishing and not catching’. 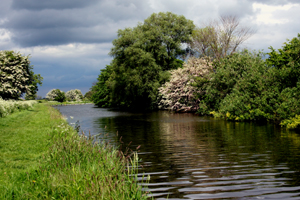 Prominent amongst the list of sequences we hoped to film for our DVD project was a piking session on our local canal. It certainly does hold a few impressive pike but it also receives a lot of angling pressure which means they can be difficult creatures to nail down. The score was simple, two rods each and adopt a mobile approach, leapfrogging our way along the canal every twenty minutes in the hope of intercepting a feeding fish.

Stu set up two float rods while I used one float and one legered bait; I say legered but I just pinched a few large shots on the top of the trace so it offered minimal resistance. We also had a variety of different baits at our disposal – dead roach, smelts, sardines and lamprey. Livebaiting isn’t allowed under the club rules.

The omens weren’t looking good as the dawn feeding period passed by without either of us having an indication. Indeed we had reached the furthest limit we had intended to cover on the length when my legered smelt was away and a spirited fight saw me netting a rather nice fish.

Piking is all about your state of mind. It can be mind numbingly dull when you are getting no action but one run is all it takes to get the adrenaline running again.

We returned the fish and headed off to another nearby stretch. Again we spread ourselves out but we’d barely sat down when Stu’s red topped float sank without trace. “Ooh, this is a good ‘un!” He exclaimed as the fish pulled back. Where mine had come in tamely and then fought beneath the rod tip, Stu’s was having a right old go and fought every inch of the way to the net. Great stuff when you’re filming!

It was a good fish, too, bigger than mine, and just to add icing on his cake the sun came out for the pictures. And guess what Stu had his pike on? That’s right, a lamprey, the same bait we used to catch a big chub on the Swale. Need I say more?

We called it a wrap soon after that. No point in being greedy, is there?