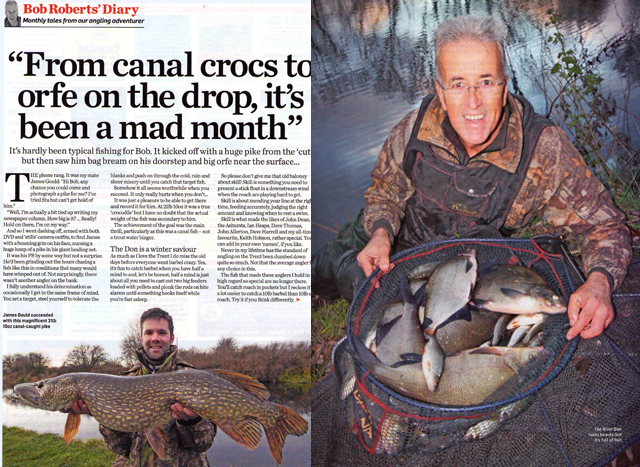 The phone rang. It was James, “Hi Bob, any chance you could come and photograph a pike for me? I’ve tried Stu but can’t get hold of him.”

“Well, I’m actually a bit tied up writing my newspaper column. How big is it? … Really! Hold there, I’m on my way.”

And so I went dashing off, making a detour via Kate’s to pick up the DVD cameras, having already checked the batteries in my stills outfit, and then high tailing it cross-country to find James with a beaming grin on his face, nursing a huge lump of a pike in his giant landing net.

It was his PB by some way but not a surprise. He’d been grinding out the hours after a fish like this in conditions that many would wimp out of. Not surprisingly there wasn’t another angler on the bank.

I fully understand his determination as occasionally I get in the same frame of mind. You set a target, steel yourself to tolerate the blanks and push on through the cold, the rain and the sheer misery till you catch that target fish.

Somehow it all seems worthwhile when you succeed. It only really hurts when you don’t…

It was just a pleasure to be able to get there and record it for him. 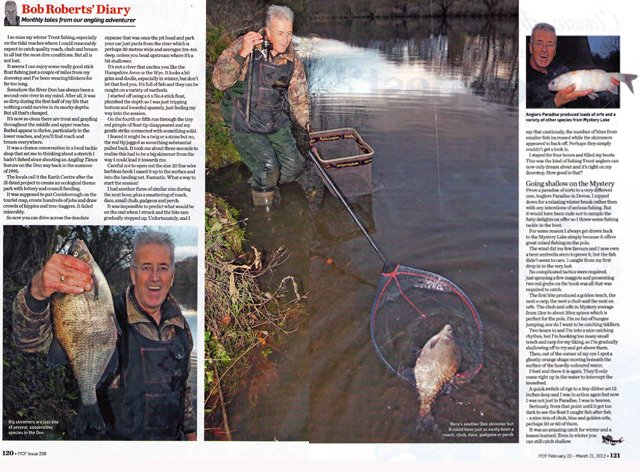 As much as I love the Trent I do miss the old days before everyone went barbel crazy. Yes, it’s fun to catch barbel when you have half a mind to, and let’s be honest, half a mind is just about all you need to cast out a two great feeders loaded with pellets and plonk the rods on bite alarms till something hooks itself while you’re fast asleep. So please don’t give me that old baloney about skill!

Skill is something you need to present a stick float in a downstream wind when the roach are playing hard to get. Skill is about mending your line at the right time, feeding accurately, judging the right amount, knowing when to rest a swim and so on. Skill is what made the likes of John Dean, the Ashursts, the Heaps, Dave Thomas, John Allerton, Dave Harrell and my all-time favourite, Keith Hobson, rather special. You can throw in a host of other names, too, if you like.

Never in my lifetime has the standard of angling on the Trent been dumbed down quite so much. Not that the average angler has any choice in this. The fish that made these anglers I hold in high regard special are no longer there. You’ll catch roach in pockets but I reckon it’s a lot easier to catch a 10lb barbel than 10lb of roach. Try it if you think differently.

I so miss my winter Trent fishing, especially on the tidal reaches where I could reasonably expect to catch quality roach, chub and bream in all but the most dire conditions but all is not lost. It seems I can enjoy some really good stick float fishing just a couple of miles from my doorstep and I’ve been wearing blinkers for far too long.

Somehow the Don has always been a second rate river in my mind. After all, it was so dirty during the first half of my life that nothing could survive in its murky depths, but all that’s changed. It’s now so clean there are trout and grayling throughout the middle and upper reaches. Barbel appear to thrive, particularly in the lower reaches, and you’ll find roach and bream everywhere.

It was a chance conversation in a local tackle shop that set me to thinking about a stretch I hadn’t fished since shooting an Angling Times feature on the Don way back in the summer of 1995. The locals call it the Earth Centre after the ill-fated project to create an ecological theme park with lottery and council funding. It was supposed to put Conisborough on the tourist map, create hundreds of jobs and draw crowds of hippies and tree-huggers. Of course it failed miserably. 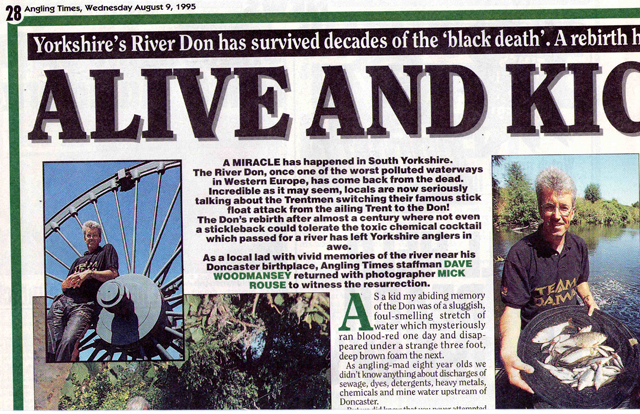 So now you can drive across the desolate expanse that was once the pit head and park your car just yards from the river which is a perhaps 30 metres wide and averaging 3-4 metres deep unless you head upstream where it’s a bit shallower. It’s not a river that excites you like the Hampshire Avon or the Wye. It looks a bit grim and docile, especially in winter, but don’t let that fool you. It’s full of fish and they can be caught on a variety of methods.

I set off using a 6 No4 stick float, plumbed the depth so I was just tripping bottom and loose fed sparsely, just feeling my way into the session. On the fourth or 5th run through the tiny red pimple of float tip disappeared and my gentle strike connected with something solid. I feared it might be a twig or a stone but no, the rod tip jagged as something substantial pulled back. It took me about three seconds to realise this had to be a big skimmer from the way I could lead it towards me.

Careful not to open out the size 20 fine wire barbeless hook I eased it up to the surface and into the landing net. Fantastic. What a way to start the session!

I had another three of similar size during the next hour, plus a smattering of roach, dace, small chub, gudgeon and perch. Indeed it was impossible to predict what would be on the end when I struck and the bite rate gradually stepped up. Unfortunately, and I say that cautiously, the number of bites from smaller fish increased while the skimmers appeared to back off. Perhaps they simply couldn’t get a look in.

I stayed four hours and filled my boots. This was the kind of fishing Trent anglers can now only dream about and it’s right on my doorstep. How good is that? 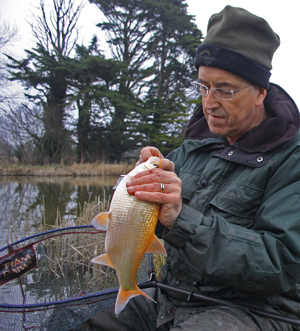 From a paradise of sorts to a very different one; Anglers Paradise in Devon. I nipped down for a relaxing winter break rather than with any intentions of serious fishing but it would have been rude not to sample the fishy delights on offer so I threw a bit of gear in the boot.

For some reason I always get drawn back to the Mystery Lake simply because it offers great mixed fishing on the pole. The wind did me few favours and I’ve a bent umbrella stem to prove it but the fish didn’t seem to care. I caught from my first drop in to the very last. No complicated tactics required, just spraying a few maggots and presenting two red grubs on the hook.

The first bite produced a golden tench, the next a carp, the next a chub and the next an orfe. The chub and orfe in Mystery average from 12oz to about a pound and a quarter apiece which is perfect for the pole. I’m no fan of bungee jumping, nor do I want to be catching tiddlers.

Two hours in and I’m into a nice catching rhythm, but I’m hooking too many small tench and carp for my liking, so I’m gradually shallowing off to try and get above them. Then, out of the corner of my eye I spot a ghostly orange shape moving beneath the surface of the heavily coloured water.

I feed and there it is again. They’d only come right up in the water to intercept the loose feed.

A quick switch of rigs to a tiny dibber set 12 inches deep and I was in action again but now I was not just in Paradise, I was in heaven. Seriously, from that point on until it got too dark to see the float I caught fish after fish – a nice mix of chub, blue and golden orfe, perhaps 50 or 60 of them. Quite an amazing catch for the middle of winter and a lesson learned. Even in winter you can still catch shallow.