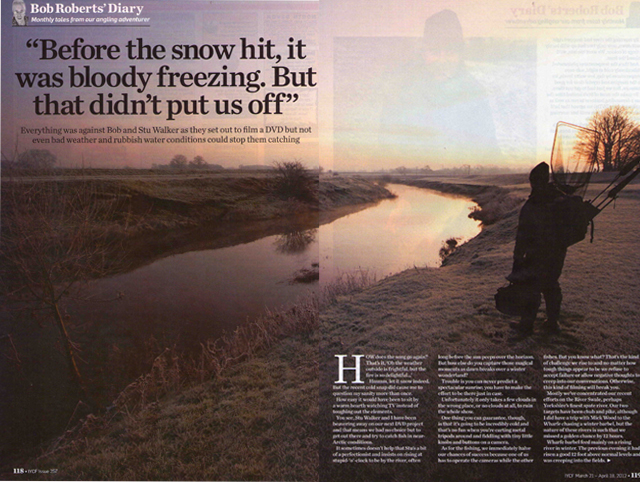 How does the song go again? That’s it, ‘Oh the weather outside is frightful, but the fire is so delightful…’ Hmmm, Let It Snow indeed. At least we were spared the snow bit but the recent cold snap did cause me to question my sanity more than once. How easy it would have been to sit by a warm hearth watching TV instead of toughing out the elements.

You see Stu Walker and I have been beavering away on our next DVD project and that means we had no choice but to get out there and try to catch fish in near-arctic conditions. It sometimes doesn’t help that Stu’s a bit of a perfectionist and insists on rising at stupid-‘o’-clock to be by the river, often long before the sun peeps over the horizon. But how else do you capture those magical moments as dawn breaks over a winter wonderland?

Trouble is you can never predict a spectacular sunrise, you have to make the effort and be there just in case. Unfortunately it only takes a few clouds in the wrong place, or no clouds at all, to ruin the whole show. One thing you can guarantee, though, is that it’s going to be incredibly cold and that’s no fun when you’re carting metal tripods around and fiddling with tiny little knobs and buttons on a camera.

As for the fishing, we immediately half our chances of success because one of us has to operate the cameras while the other fishes, but you know what? That’s the kind of challenge we rise to and no matter how tough things appear to be we refuse to accept failure or allow negative thoughts to creep into our conversations, otherwise this kind of filming will break you. 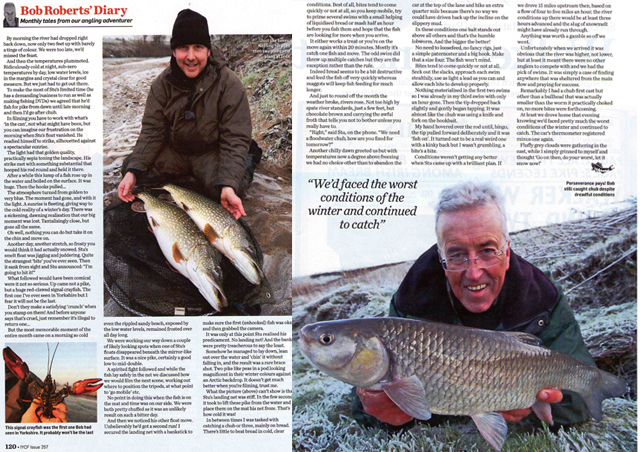 Mostly we’ve concentrated our recent efforts on the River Swale, perhaps Yorkshire’s finest spate river. Our two targets have been chub and pike although I did have a trip with Mick Wood on the Wharfe chasing a winter barbel, but the nature of these rivers is such that we missed a golden chance by 12 hours. Wharfe barbel feed mainly on a rising river in winter. The previous evening it had risen a good 12 feet above normal levels and was creeping into the fields. By morning the river had dropped right back down, perhaps 2 feet up and barely a tinge of colour. Too late, we’d missed the feast.

And then the temperatures plummeted. Ridiculously cold at night, sub-zero temperatures by day, low water levels, ice in the margins and crystal clear for good measure. But we just had to get out there. To make the most of Stu’s limited time (he has a demanding business to run as well as making fishing DVDs) we agreed that he’d fish for pike from dawn through till late morning and then I’d go after chub.

In filming you have to work with what’s ‘in the can’, not what might have been, but you can imagine our frustration on the morning when Stu’s float vanished, he readied himself to strike, silhouetted against a spectacular sunrise. The light had that golden quality, practically sepia toning the landscape. His strike met with something substantial that hooped his rod round and held it there. After a while this lump of a fish rose up in the water and boiled on the surface. It was huge. Then the hooks pulled… 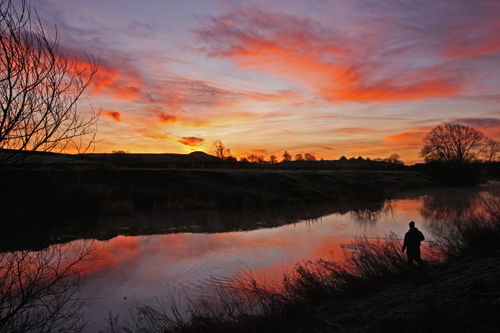 The atmosphere turned from golden to very blue. The moment had gone, and with it the light. A sunrise is fleeting, giving way to the cold reality of a winter’s day. A sickening, dawning realisation that our big moment was lost. Tantalisingly close, but gone all the same.

Oh well, nothing you can do but take it on the chin and move on.

Another day, another stretch, so frosty you might imagine it had actually snowed. Stu’s smelt float was jigging and juddering. Quite the strangest ‘bite’ you’ve ever seen. Then it sank from sight, Stu announced, ‘I’m going to hit it!’ And what followed would have been comical were it not so serious. Up came not a pike, but a huge red-clawed signal crayfish. The first one I’ve ever seen in Yorkshire but I fear it will not be the last.

Don’t they make a satisfying ‘crunch’ when you stamp on them?!!! And before anyone says that’s cruel, just remember it’s illegal to return one…

But the most memorable moment of the entire month came on a morning so cold even the rippled sandy beach, exposed by the low water levels, remained frosted over all day long. We were working our way down a couple of likely looking spots when one of Stu’s floats disappeared beneath the mirror-like surface. It was a nice pike, certainly a good low- to mid-double. 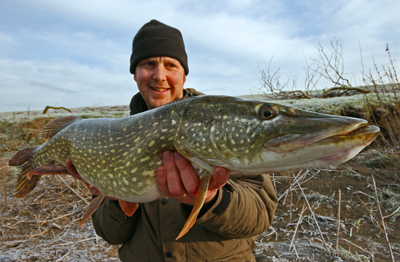 A spirited fight followed and while the fish lay safely in the net we discussed how we would film the next scene, working out where to position the tripods, at what point to ‘go mobile’ etc. No point in doing this when the fish is on the mat and time was on our side. We were both pretty chuffed as it was an unlikely result on such a bitter day.

And then we noticed his other float move. Unbelievably he’d got a second run! I secured the landing net with a bank stick to make sure the first (still to be unhooked) fish was okay and then grabbed the camera. It was only at this point Stu realised his predicament. No landing net! And the banks were pretty treacherous to say the least. But somehow he managed to lay down, lean out over the water and ‘chin’ it without falling in and the result was a rare brace shot. Two pike like peas in a pod looking magnificent in their winter colours against an arctic backdrop. It doesn’t get much better when you’re filming, trust me.

What the picture can’t show is that Stu’s landing net was stiff. In the few seconds it took to lift these pike from the water and place them on the mat his net froze. That’s how cold it was!

In between times I was tasked with catching a chub or three, mainly on bread. There’s little to beat bread in cold clear conditions. Best of all, bites tend to come quickly or not at all, so you keep mobile, try to prime several swims with a small helping of liquidised bread, or mash, half an hour before you fish them and hope that the fish are looking for more when you arrive.

It either works a treat or you’re on the move again within 20 minutes. Mostly it’s catch one fish and move. The odd swim did throw up multiple catches but they are the exception rather than the rule.

Indeed bread seems to be a bit destructive and feed the fish off very quickly where maggots will keep fish feeding for much longer.

And just to round off the month the weather broke, rivers rose, not too high by spate river standards, just a few feet, but chocolate brown and carrying the awful froth that tells you not to bother unless you really have to. ‘Right,’ Said Stu, on the phone, ‘We need a floodwater chub, how are you fixed tomorrow?’

Another chilly dawn greeted us but with temperatures now a degree above freezing we had no choice other than to abandon the car at the top of the lane and hike an extra quarter mile because there’s no way we could have driven back up the incline on slithery mud.

In these conditions one bait stands out above all others and that’s the humble lobworm. The bigger the better! No need to loose feed, no fancy rigs, just a simple paternoster and a big hook. Make that BIG, like a size four. The fish won’t mind. 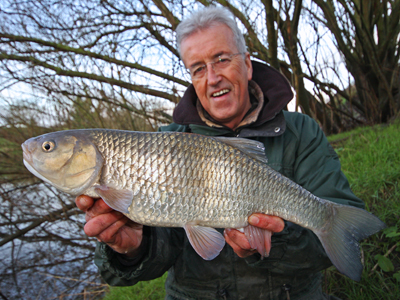 Bites tend to come quickly or not at all. Seek out the slacks, approach each swim stealthily, use as light a lead as you can and allow each bite to develop properly. Nothing materialised in the first two swims so I was already in my third swim with only an hour gone. Then the tip dropped back slightly and gently began tapping. It was almost like the chub was using a knife and fork. My hand hovered over the rod until bingo, the tip pulled forward deliberately and it was ‘fish on’. It turned out to be a real weird one with a kinky back but I wasn’t grumbling, a bite’s a bite.

Conditions weren’t getting any better when Stu came up with a brilliant plan. If we drove 15 miles upstream then, based on a flow of four to 5 miles an hour, the river conditions up there would be at least 3 hours advanced and the slug of snowmelt might have already run through. Anything was worth a gamble so off we went.

Unfortunately when we arrived it was obvious that the river was higher, not lower, but at least it meant there were no other anglers to compete with and we had the pick of swims. It was simply a case of finding anywhere that was sheltered from the main flow and praying.

Remarkably I had a chub first cast but other than a bullhead that was actually smaller than the worm it practically choked on, no more bites were forthcoming. At least we drove home that evening knowing we’d faced pretty much the worst conditions of the winter so far and continued to catch. The car’s thermometer registered minus one again. Fluffy grey clouds were gathering in the east, while I simply grinned to myself, ‘Go on then, do your worst, let it snow now!’