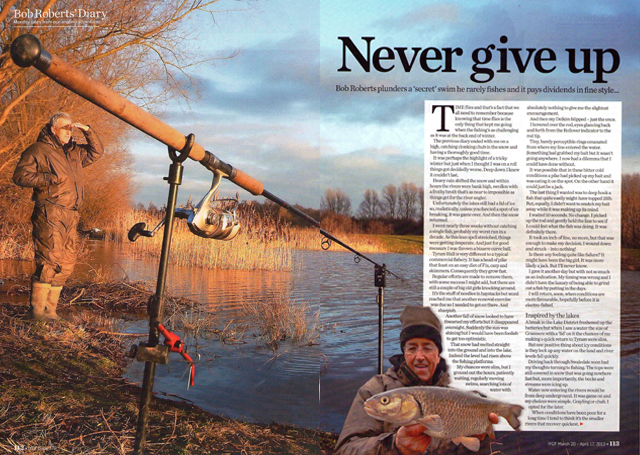 Time flies. It’s a fact that we all need to remember. Knowing time flies is just about the only thing that keeping me going when the fishing’s as challenging as it was recently.  The previous diary ended with me on a high, catching clonking chub in the snow and having a thoroughly good time. It was perhaps the highlight of a tricky winter but just when I thought I was on a roll things got decidedly worse. Deep down I knew it couldn’t last.

Heavy rain shifted the snow and within hours the rivers were bank high, swollen with a frothy broth that’s as near to impossible as things get for the river angler. Unfortunately the lakes still had a lid of ice so in realistic terms, unless you fancied a spot of ice breaking it was game over. And then the snow returned. I went nearly three weeks without catching a single fish, probably my worst run in a decade. As this deadline loomed things were getting desperate.

And just for good measure I was thrown a curve ball. Tyram Hall is very different to your normal commercial fishery. It has a head of pike that feast on an easy diet of F1’s, carp and skimmers. Consequently they grow fast. Regular efforts are made to remove them, with some success I might add, but there are still a couple of big old girls knocking around. It’s still the stuff of needles in haystacks but word reached me that another removal exercise was due so I needed to get on there and sharpish. 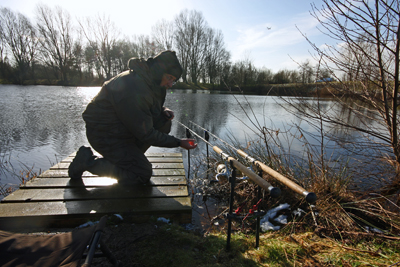 Another fall of snow looked to have thwarted my efforts but it disappeared overnight. Suddenly the sun was shining but I would have been foolish to get too optimistic. That snow had melted straight into the ground and into the lake. Indeed the level had risen above the fishing platforms. My chances were slim, but I ground out the hours, patiently waiting, regularly moving swims, searching lots of water with absolutely nothing to give me the slightest encouragement.

And then my Delkim blipped – just the once…

I hovered over the rod, eyes glancing back and forth from the Rollover indicator to the rod tip. Tiny, barely perceptible rings emanated from where my line entered the water. Something had grabbed my bait but it wasn’t going anywhere. I now had a dilemma that I could have done without.

It was possible that in these bitter cold conditions a pike had picked up my bait and was eating it on the spot. On the other hand it could just be a jack. The last thing I wanted was to deep hook a fish that quite easily might have topped 25lbs but equally I didn’t want to snatch my bait away while it was making up its mind.

I waited 10 seconds. No clues. I picked up the rod and gently held the line to see if I could feel what the fish was doing. It was definitely there. It took an inch of line, no more, but that was enough to make my decision. I wound down and struck – into nothing!

Is there any feeling quite like failure? It might have been the big girl. I was more likely a jack. But I’ll never know.

I gave it another day but with not so much as an indication before I pulled off. My timing was wrong and I didn’t have the luxury of being able to grind out a fish by putting in the days. I will return, soon, when conditions are more favourable, hopefully before it is electro fished. But I also need to make the most of the remaining weeks of the river season because I’m rapidly approaching the last chance saloon there as well. 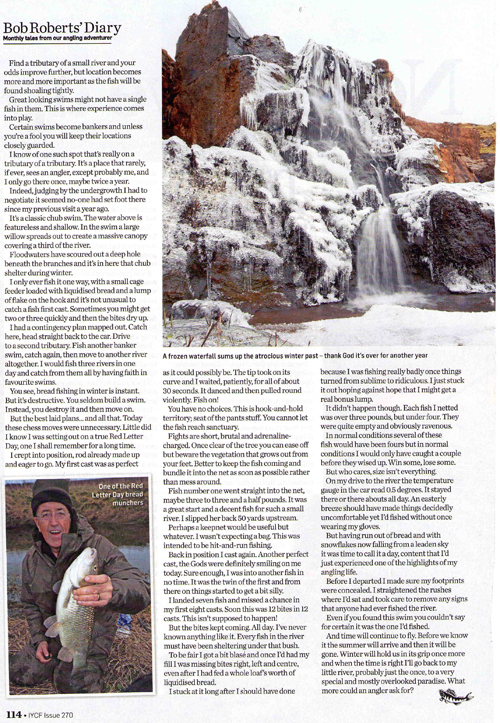 A break in the Lake District freshened up the batteries but I have to say that when I saw a water the size of Grassmere with a ‘lid’ on it the chances of me making a quick return to Tyram were slim but one positive thing about icy conditions is they lock up any water on the land and river levels fall quickly. Driving back through Swaledale soon had my thoughts turning to fishing. The tops were still covered in snow that was going nowhere fast but more importantly the becks and streams were icing up.  Water now entering the rivers would be from deep underground. It was game on and my choices were simple. Grayling or chub. I opted for the later.

When conditions have been poor for a long time I tend to think it’s the smaller rivers that recover quickest. Find a tributary of a small river and your odds increase again, but location becomes more and more important as the fish will be found shoaling tightly. Great looking swims might not have a single fish in them. This is where experience comes in to play. Certain swims become bankers and unless you’re a fool you will keep their locations closely guarded.

I know of one such spot that’s really on a tributary of a tributary. It’s a place that rarely, if ever, sees an angler, except probably me, and I only go there once, maybe twice a year. Indeed, judging by the undergrowth I had to negotiate it seemed no-one had set foot there since my previous visit a year ago. 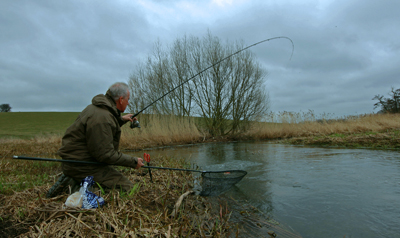 It’s a classic chub swim. The water above is featureless and shallow. In the swim a large willow spreads out to create a massive canopy covering a third of the river. Flood waters have scoured out a deep hole beneath the branches and it’s in here that chub shelter in winter.

I only ever fish it one way. A small cage feeder loaded with liquidised bread and a lump of flake on the hook and it’s not unusual to catch a fish first cast. Sometimes you might get two or 3 quite quickly and then the bites dry up. I had a contingency plan mapped out. Catch here, head straight back to the car. Drive to a second tributary. Fish another banker swim, catch again, then move to another river altogether. I would fish three rivers in one day and catch from them all by putting faith in my favourite swims. You see bread fishing in winter is instant. But it’s destructive. You seldom build a swim, you destroy it and then move.

But the best laid plans and all that. Today these chess moves were unnecessary. Little did I know I was setting out on a true red letter day. One I shall remember for a long time.

I crept into position, rod already made up and eager to go. My first cast was as perfect as it could possibly be. The tip took on its curve and I waited, patiently, for all of about 30 seconds. It danced and then pulled round violently. Fish on! 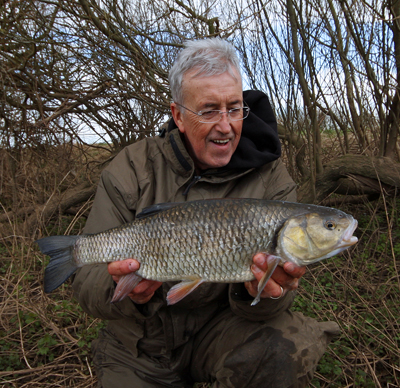 You have no choices. This is hook and hold territory; seat of the pants stuff. You cannot let the fish reach sanctuary. Fights are short, brutal and adrenaline charged. Once clear of the tree you can ease off but beware the vegetation that grows out from your feet. Better to keep the fish coming and bundle it into the net as soon as possible rather than mess around.

Fish number one went straight into the net, maybe 3 to three-and-a-half pounds. It was a great start and a decent sized fish for such a small river. I slipped her back 50 yards upstream. Perhaps a keepnet would be useful but whatever. I wasn’t expecting a bag. This was intended to be hit and run fishing.

Back in position I cast again. Another perfect cast, the Gods were definitely smiling on me today. Sure enough I was into another fish in no time. It was the twin of the first and from there on things started to get a bit silly. I landed 7 fish and missed a chance in my first 8 casts. Soon this was twelve bites in 12 casts. This isn’t supposed to happen!

But the bites kept coming. All day. I’ve never known anything like it. Every fish in the river must have been sheltering under my bush. To be fair I got a bit blasé and once I’d had my fill I was missing bites right left and centre, even after I had fed a whole loaf’s worth of liquidised bread. I stuck at it long after I should have done because I was fishing really badly once things turned from sublime to ridiculous I just stuck it out hoping against hope that I might get a real bonus lump. It didn’t happen though. Each fish I netted was over 3lbs, but under four. They were quite empty and obviously ravenous. In normal conditions several of these fish would have been fours but in normal conditions I would only have caught a couple before they wised up. You win some, you lose some. But who cares. Size isn’t everything. 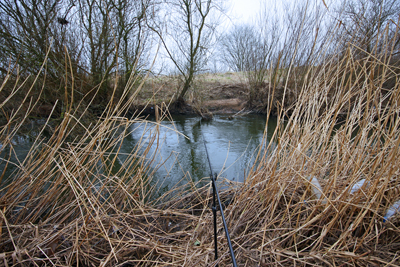 On my drive to the river the temperature gauge in the car read 0.5 degrees. It stayed there or there abouts all day. An easterly breeze should have made things decidedly uncomfortable yet I’d fished without once wearing my gloves. Funny how you can shut out the weather when things go so well, but having run out of bread and with snowflakes now falling from a leaden sky it was time to call it a day, content that I’d just experienced one of the highlights of my angling life.

Before I departed I made sure my footprints were concealed. I straightened the rushes where I’d been sat and took care to remove any signs that anyone had ever fished the river. Even if you found this swim you couldn’t say for certain it was the one I’d fished. Is that selfish? I don’t think so.

And time will continue to fly. Before we know it the summer will arrive and then it will be gone. Winter will hold us in its grip once more and when the time is right I’ll go back to my little river, probably just the once, to a very special and mostly overlooked paradise. It will be here, waiting for me, just as I left it. What more could an angler ask for?