It seems like a lifetime ago now but back in 96 David Marle launched the finest angling competition I’ve ever had the priviledge to be involved with. It was held on Great Linford Fisheries and was broadcast as a Christmas special by Sky Sports.

Contestants had to qualify by either winning a National Championship, Fish ‘O’ Mania, Embassy Pairs, , Kamasan Matchman of the Year, Trent Championship, Thames Championship, Sensas Match Catch Championship, Sony Carp Challenge, King of Clubs, John Smiths or, if you were a specimen hunter catch one of the season’s five biggest barbel, chub, perch, roach, tench river carp, mirror carp, common and so on. The list of invitees was phenomenal but we can only assume that those who didn’t attend bottled it because the winner stood to pick up a cool five grand which was a lot of money back then. 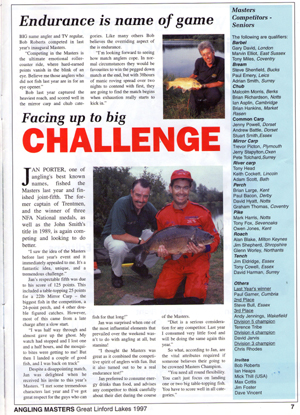 To win the Masters you had to fish a 38-hour roving competition followed by a four-hour match. Points were awarded in ten different categories and whoever gained the most points was crowned champion. As an example, if you caught the heaviest tench in the roving section you were awarded 25 points. Whoever recorded the second biggest got 24 and so on down to 1 point. Those who finished outside the top 25 got nil points and ultimately didn’t make the cut because only 25 anglers would fish the match.

It was certainly a challenge and I hold my hands up and freely admit I blew it. I got my game plan wrong and paid the price but at least I could reflect on winning the match. Paul Garner proved a worthy champion and remains a friend to this day.

With the benefit of competing in the inaugural Masters I honed my game and returned to win the competition in 1997.

It came as a pleasant surprise to see these clips of the first match uploaded to YouTube by someone called apollo36uk Apollo who’s clearly a bit of a music fan.