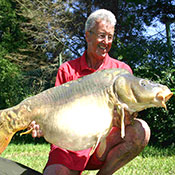 As a match angler back in the 1980’s I never really hankered after catching a big carp. Okay I would frequently pick up magazines and newspapers to gaze in admiration at covers that portrayed some very serious angler or other cradling what was, for the time, a huge carp. I say huge, but back in those days a mere 20-pounder was something to shout about for the vast majority of carp anglers.
I always believed that if I really wanted to catch one I could do it, technically speaking, despite living in an area of the country that was a veritable carp wasteland. All I had to do (in my mind) was to devote sufficient time to the cause – but time wasn’t something I had much of so that dream would have to wait.

A quarter of a century later it’s hard to believe how carp fishing has changed but maybe if you consider that Dick Walker, who held the carp record for so long, and is practically credited with rewriting carp fishing history, only ever caught three carp from his precious Redmire Pool. Can you believe that? Carping was practically a black art back then and you only have to look back to Kevin Maddocks’ impressive rise to fame for proof of that.

Maddocks announced to anyone who would listen that he was going to target a hundred doubles in a season and promptly delivered the goods. Back then such reckless proclamations drew gasps. These were outlandish predictions, practically bordering on heresy. The following season he predicted he would catch no less than 20 twenties and though that might be deemed a modest ambition by today’s standards, back then it was ground breaking bearing in mind a single twenty was deemed to be the fish of a lifetime.

But Kevin had several aces up his sleeve. At that time he was one of the few anglers using hair rig presentations and bolt rigs. He was also at the cutting edge of the boiled bait revolution. Information like this was top secret and know to only a select few.

How times change. Match anglers regularly catch 20lb carp nowadays, not to mention doubles galore and the carp record has soared past 60lb. And yes, I did find the time to catch a few carp myself including commons to over 40lb and mirrors to more than 55lb. I even had three twenties in the same landing net during one incredibly hectic burst of action, a feat made more remarkable by the fact that I was only fishing with two rods at the time! And carp are now widespread, accessible to all.

Contrary to perceived opinion carping no longer involves carting around mountains of gear, bivvying up, expensive baiting campaigns and sticking it out for 36 hours sessions at least, or should I say it doesn’t have to. The trouble is, some folk see the camping and boozing aspects of carping as the prime reason for going fishing and the actual catching of fish is secondary.

This summer I’ve been struggling with a hectic schedule in my day job; a schedule that has taken me up and down the Eastern side of England ranging between London and the Scottish borders, taking in places like Newcastle, Middlesborough, Darlington, Leeds, Shipley, Sheffield, Lincoln, Leicester, Derby, Bedford, Luton, Cricklewood, Finsbury Park and a couple of dozen other towns and cities equally exotic. At one stage I was tempted to have a t-shirt printed, “Bob Roberts On Tour 2007”.

It was a real slog with countless hours spent in motorway traffic jams and boring hotels but I wanted to do it. A commitment like this eats a great big hole into your fishing time, especially when the rivers are out of sorts, but it doesn’t mean you still can’t catch a carp or two. As a change from hotel life I squeezed in a couple of overnight ‘crashes’ at Allan Parbery’s place. I enjoy Allan’s company but it’s also his busiest time of year at the Mistral factory and it would have been so easy to just chill out and share a few beers but I had a plan. Instead of boozing I challenged Allan to catch me a twenty after work; a challenge he reluctantly accepted.
You’ll see from the photo of Allan’s dashboard that we didn’t get to the fishery until 6.24pm – that’s genuine, by the way. On a short session it is remarkable how little gear you need but Allan didn’t grab his gear immediately and run to the nearest swim. Even with the limited time we had available to us he still wanted to go and look for fish and his diligence looked like paying off.

There wasn’t another soul on the water so we knew the fish would not be spooked. We carefully crept up to the edge of half a dozen swims, peering through polarising specs into the margins. It’s amazing how much time carp spend in the margins when they’re undisturbed.
Allan led the way and we’d reached the final swim on the near bank when Allan suddenly froze and twisted his palm out behind him, towards me. A clear signal he’d spotted something. Slowly I edged forward to see what he was looking at and there before us, three good fish ghosted in slowly from the right, one dipped down and sent up a cloud of silt before all three leisurely vacated the swim.
“They’ll be back!” Said Allan.
Where most anglers would be racing back to the car for their gear, Allan strolled back and picked up a couple of bags of ‘No Name’ boilies. Returning to the swim he scattered maybe forty boilies, a mix of 15 and 20mm varieties, just beyond the margin weeds.

Only when he’d primed the swim did Allan fetch his gear and the amount of gear he brought surprised me. Allan had no chair, rucksack, holdall, stove, water bottle, kettle or any of the usual stuff that most carp anglers regard as indispensable. In fact he didn’t even bring a single bank stick or bite alarm.

Allan’s rods were already made up with rigs tied. All he had to do was mount a fresh bait on the hair. Allan’s choice of leger weight was a Stonzes in-line pebble that would camouflage nicely against the gravel lake bed.

Because he was fishing so close in he could literally lower his rig gently onto the baited patch. He then simply laid his rod down on the grass, flicked on the free spool mechanism and eased off a couple of feet of line.

Fishing a slack line would mean it sank onto the lake bed, out of the way of any feeding fish. The foot of line from his rod tip to the lake surface would be his visual bite indicator.

We then crept back from the edge of his swim, moved between his swim and the next so we were definitely off the skyline but in easy sight of the rod and plonked our backsides down on the grass. Who needs a chair on a summers evening like this?
Already the sun was dipping down behind the far bank trees. Time is tight when you are short session fishing but there’s no reason why you cannot continue to do really short sessions in Autumn and early Winter. The only change you might need to make is to use a bite alarm when the nights draw in and you end up fishing in the dark. Unfortunately we didn’t have that option. Our goal was to nick a fish in daylight simply for photographic purposes.

Time was flying by and the light was beginning to fade when Allan noticed his line twitch. Suddenly a cloud of bubbles erupted right over the baited patch.
“Here we go…” Said Allan.
Another twitch of the line and then it gently tightened.

Allan was on it like a shot. In the blink of an eye the rod was in his hand and hooped over. For a second we both experienced an adrenalin rush but Allan’s cry of, “B*****ks!” made it quite clear this was no carp and seconds later he dipped the net under one of the blackest tench I’ve ever seen. It was a good fish, mind, but not what we came for.

And that was the end of the action for our first evening’s fishing.

A week later I was back again. Same lake, same late start but this time with a sense of desperation. Allan’s choice of lake, pretty as it was, hadn’t produced a single fish to any of the members during the intervening week.

This time we walked a full circuit of the lake without seeing so much as a sign of carp. Allan decided to fish the same swim as the previous week working on the premise that those carp we saw last time probably have a regular patrol route.

You could tell Allan was desperately keen to catch tonight. Once he’d laid the margin trap he quickly baited two more rods, again with identical Stonze rigs but these were cast from the adjacent swim. The first went out towards a small island, the other towards a plateau. Both had simple stringers attached to ensure they didn’t tangle and to increase attraction around the hook bait. Allan then added a scattering of free offerings.

Rather than set up bite alarms Allan ingeniously made the most of a couple of vertical scaffold tubes, used in the swim construction. He simply stuck both rod butts into separate tubes and tightened down to the Stonze, putting a slight bend in the tips so he could clearly spot drop back bites.

It’s not a style of fishing that you could do for hours on end and would be simply impractical on an overnighter but for short evening sessions it begs the question, do we actually need all that stuff we tend to lug around with us.

With the minutes ticking down to the time when we would have to end our session – one hour before closing time plus the time it would take us to wrap up and drive to Allan’s local(!) – we were both feeling pretty frustrated. Funny how you’ll sit there for hours on end, totally unconcerned about the lack of action, on a long session yet you get so impatient in a short session…

And then it happened. Without warning the line on the margin rod suddenly tightened and in the same split second the tip was yanked down. Simultaneously a huge tail pattern erupted on the surface and the sound of a screaming clutch rent the still evening air.
Fish on!

Alas i wasn’t actually with Allan when all this happened as I’d decided to have a wander round the other side of the lake with a floater rod and by the time I’d raced back to him the fish had been safely landed and he was in the process of hoiking it up onto the scales.

“Just check that for me will you, Bob, it looks like a good ‘un!”
Allan’s a master of the understatement. A good one it was indeed, but he’d failed miserably in his quest to catch a twenty. What he’d only gone and done was to fluke out a thirty – in a three-hour session after work!
If Allan can do it, I’m sure you can.