The red tops are in a frenzy predicting an arctic blast that will dump a mountain of snow, chill us down to minus 10 and last for a week. Of course it won’t actually come to that but those who grew up fishing the Trent in its heyday have recently witnessed lots of snowflakes settling on its hallowed banks, indeed ever since the barbel boom began, and it’s not always been for the better.

Is it me, or do some barbel anglers do themselves no favours by their behaviours? Quite honestly I’m beginning to wonder if we haven’t been infiltrated by a new generation of Snowflake Millennial Barbellers (SMBs for short) who feel a sense of entitlement against which no-one else matters, and the generations of Trent anglers who still fish for the ‘lesser’ species are to be treated with disdain.

Where were these SMBs in the 1960s and 70’s. Oh, that’s right, half of them weren’t even born. They have never known times when the Trent was ‘the people’s river’ lined by anglers 10 to 15 yards apart on both banks for miles on end. They never witnessed the fantastic roach fishing of the 1970s and 80s, never saw the birth of the feeder revolution, nor did they enjoy the ‘Pomeranian’ explosion (as dear old Jan used to call them). They have no idea what competing in a 300-peg open match was like or a thousand peg National. And one thing’s for certain, they were nowhere to be seen during the bleak years following the Angling Times pronouncement in banner headlines that the Trent was dead.

No, they’re Johnny Come Latelys. The piscine equivalent of immigrants who turn up with no intention of integrating nor have any understanding of the language and cultures of the indigenous anglers. It’s not for them to change, they want everyone else to step aside, we must all worship their new God and abide by their unwritten rules. Rules I might add that are always self-serving and designed to favour their sometimes obnoxious attitudes.

These are the guys who appear to speak a different language to the locals using terms like Fack and Kant. I’m sure you’ve heard them, I often do even from the opposite side of the river. Nor do they see anything wrong at all in flashing the cash to syndicate what were previously club waters.

‘Fack orf! I don’t care whether you’ve fished here for 50 years, this is our water now.’

They think camping out in one swim for days on end, smoking funny cigarettes and drinking lager counts as fishing and is perfectly acceptable. But hey, each to their own on that score providing the rules allow it. But we all know this isn’t fishing in the purist sense. It’s vertical carping with much the same mentality that has frequently blighted that side of the sport.

Much worse is their insistence that when they plot up for the next few days they expect to be allowed to fish the entire river, bank to bank, irrespective of who owns the opposite bank and no-one should enter their personal space which extends approximately 500 yards in every direction including the skies above.

‘Fack orf, mate! I’ve got a rod in that margin… And there, too. Now run along and fish somewhere else, you kant!

Does any of this sound familiar? 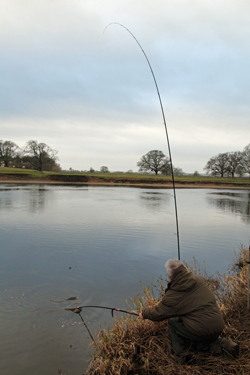 A chub caught by a ‘proper’ angler

Yesterday I went maggot drowning with a mate who was going to fish with bread. We had no intention of trying to catch barbel as we were targeting chub and bream, mainly, although if a nice roach or perch wanted to play we wouldn’t object. Trouble was, there was a particularly nasty wind blowing and a threat of rain so we headed for a particular area where the main current is over the far side and we would be able to fish in the steady water close in to our bank – which is where you might expect to find our target species – with the wind off our backs.

Unlike barbel – that can be found in any bit of streamy water on the Trent providing you hang around long enough (you can even do it in your sleep) – catching other species by design means targeting the swims where they live during the winter months. Bream and chub are not dotted around like currants in a fruit cake, they shoal up, or at least they are only likely to be caught by design from particular areas, often specific swims in the depths of winter. Match anglers used to call these swims ‘fliers’, back in the good old days.

With a couple of pints of maggots going to waste if I didn’t use them I set up a light quivertip rod, the smallest block-end feeder that Thamesley used to make with no extra lead added and a 3lb hook link to a finish wire size 16 hook carrying 2 maggots. The river here is upwards of 70 yards at its widest point (measured on Google Earth), the far 50 yards of which held no interest to me. The idea was to fish fairly close in because I had a waggler rod waiting patiently in a rod sleeve that I would switch to if, or hopefully when I started getting bites on the feeder.

Margin willows and alders limited swim access on this shortish wind-protected straight so I took the 3 available upstream swims whilst my mate could rotate the downstream three. It had been our intention to spend up to an hour in each swim before moving on to another stretch, keeping mobile, as you do when ‘proper fishing’ for chub. 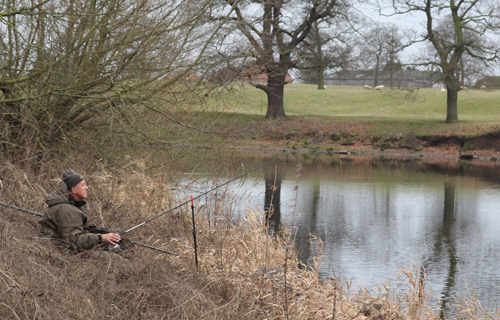 Nearside quivertipping with maggots has no effect whatsoever on someone fishing for barbel on the far side so why make a fuss?

There was one angler on the far bank and guess what? He was a snowflake. Fack me! Right down to his Cockney-mockney accent, which carried right across the river, even against the blustery wind. You could hear his every word and there were plenty of them because he spent most of the day on his mobile phone telling anyone who’d listen about the ‘Kant’ who had all the river to fish in yet he’s set up opposite.

Matey boy snowflake, who clearly has no heritage experience on this river, was fishing practically under his feet, just an underarm swing past the rocks. I meanwhile had actually set up opposite, but slightly below him and was casting at 45 degrees downstream with a gentle lob to what would actually be half-way down the swim below his. In reality my feed and my hook bait was positioned way over 50 yards away from his on the complete opposite side of the river. That’s the equivalent of at least 3 decent swims away had we been fishing the same bank which clearly we weren’t.

And let’s cut to the real nitty-gritty; I was targeting a different species to him, using a different bait and totally different methods. My impact on his fishing was absolutely zero – and if he’d kept his gob shut I would most likely have been on the move in less than an hour. And if I did catch I’d have switched to float fishing and loose feeding. But no, like a Brexit Remoaner he couldn’t accept my democratic right and he spent half a day moaning like a good ‘un and blanking like a complete wanker! And of course I dug in my heels and sat there for far longer than intended just to wind him up even more!

The bottom line for me is that I didn’t have a bite on maggot all day, not in my first choice ‘flier’ swim nor any other that I tried later. So what harm did I actually do to his fishing? Am I so ugly that sitting nearly 70 yards away would put him off his sandwiches? Or maybe I was spoiling his view of an empty field.

A switch to bread later on produced bites straight away in most of the swims I had picked out as having potential and indeed that is what I should have been fishing with in the first swim, but hey, imagine how that would have gone down with my snowflake millennial friend on the far bank had I actually been catching fish rather than just drowning a few maggots.

I’m sure he’ll be moaning still, about etiquette and my terrible attitude whilst remaining completely blind to his own ignorance and irrational selfishness. But this is what I’ve come to expect from those who’s fishing is so one-dimensional they’d still be trying to catch barbel if there was a foot of ice on the river.

Perhaps it’s time that these obsessives took a step back and recognised that not all anglers want to be part of their garden gnome club, where everyone and everything comes a poor second to their arrogance. It’s time they took more pragmatic view and accepted that there are other species, other methods and other baits; that catching a pretty stupid barbel on a bolt rig is not the be-all and end-all to fishing and they should show a little more grace and tolerance to others instead of demanding the rest of the angling world dances to their self-imposed, self-serving fantasy rules. 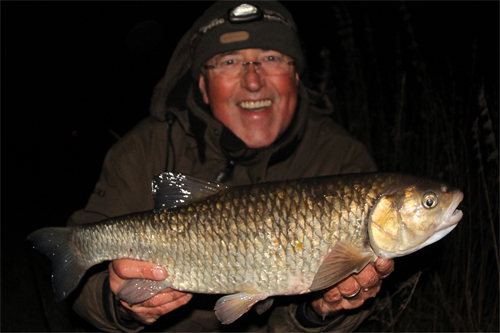 In other words, get over yourselves and have a good long look in the mirror. Stop being so precious and selfish. You don’t own the whole bloody river and when the barbel boom has run its course (as it has already on so many other rivers) we probably won’t see you again. You’ll be off to plunder someone else’s sport, or more than likely take up golf. Unfortunately with your kind of values and attitudes you won’t exactly be missed nor will you ever fit in at the golf club.

And a happy new year to all.

Didn’t take long for someone to reveal who the miserable git opposite was, did it? A Facebook message arrived within 24 hours… 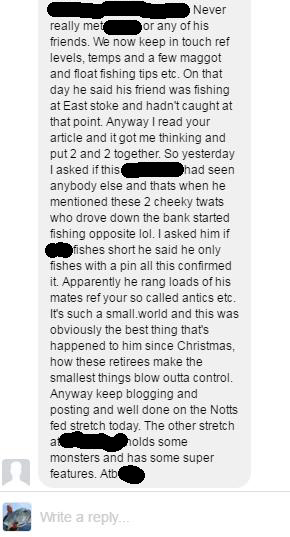 Obviously I’ve redacted all names but my thanks go to my Facebook mole who spilled the beans, confirming who this matey boy snowflake was and that he was indeed fishing with a pin, close to his own bank, yet couldn’t cope with someone daring to cast a maggot fully 70 yards from his precious boilie!

4 thoughts on “Snowflakes And Barbel Bashing”