Strictly In The Shade

In my latest blog I mentioned that I’d paid a visit to the Optilabs Laboratory in Croydon and confessed that previously I had no idea just what a complicated process making glasses is. Well let me shed a little more light on my day here and if you stick around till the end of the article there’s another specially selected playlist for you to have a listen to. 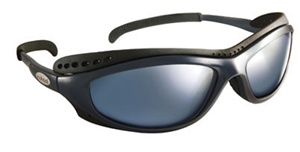 You know, I foolishly thought that whenever I went into an opticians and ordered a new pair of spectacles, I chose my frames there would be a huge warehouse somewhere containing boxes of frames and matching pile of lenses in every possible combination of strengths, treatments and pupil distances (that’s the distance between you own pupils), and that some spotty teenager would simply snap the prescribed lens into my frame. 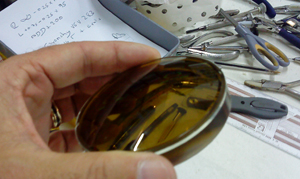 Of course, that’s a preposterous supposition and couldn’t be much further from the actual truth. It never even crossed my mind that the very frames themselves will vary considerably because every manufacturing process comes with its own set of engineering tolerances.

Initially my interest was in the polarising specs that are so important to us anglers, especially those like me who enjoy stalking and sight fishing. I already wear Optilabs glasses for my fishing and have done so for over ten years (I currently wear a pair of Panther style specs while Stu Walker wears the Storm frames) and they’re fitted with Ultra 2000 prescription lenses. 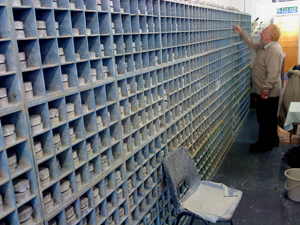 Ultra 2000 lenses are unique in that they are the only polarising specs which change colour according to light levels. You’ll have seen something similar with photochromic sun glasses which have clear lenses in darkness but as light levels increase the lenses go darker, however photochromic glasses only react to UV light.

By contrast Ultra 2000 lenses work across a broad spectrum giving the angler a massive advantage in poor light conditions. Indeed the Ultra 2000 lenses are the only polarising lenses in the world that change colour and react to light. 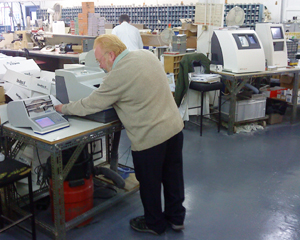 The lenses themselves comprise two layers of plastic sandwiching a laminated polarising layer in the middle. Again, I was thinking each would come as a finished lens but they don’t. In fact the second picture down (above on the left) shows the ‘blank’ lens. It’s fully 8cm in diameter and a centimetre thick. The blank has to be shaped, ground and polished so that it fits exactly into the frame and meets the wearer’s individual eye prescription.

Furthermore the lens has to be set at an exact angle in relation to the adjacent lens to work. If you’ve ever used a circular polarising lens on a camera you’ll understand how rotation effects the efficiency. The laminations have to line up correctly to eliminate horizontal glare. And then you have to factor in pupil distance so the eye looks through the correctly ground part of the lens. 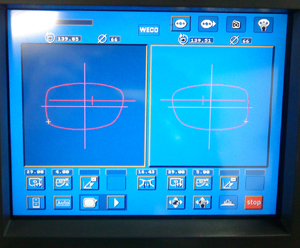 Still with me? Okay, my eyesight is far from perfect, neither long nor shortsighted, so I require varifocal lenses which allow me to focus on both close and distant objects as I look upwards or down. But the most complicated bit is yet to come, Panther and Storm glasses are what we call wrap round styles so you’re not looking at right angles to the lens itself and that’s where computers enter the equation as the actual thickness has to be calculated precisely.

Get those lenses a millimetre out in any plane and you’ve blown it. You also have to ensure the lenses don’t pop out under stress so the lense edges have to have a special mitre ground into them to snap firmly into the frames. 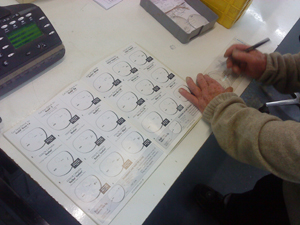 The grinding and polishing is all done using sophisticated machinery but the contrast between 20th Century and 19th Century was always staring me in the face. Along one wall was a rack of ‘tablets’ for the want of a more accurate term, each one ground to a specific curvature. These form templates that the polishing machine measures and replicates.

The skill levels are remarkable because, as you can imagine, mistakes are extremely costly.

So how does this compare to the many, much cheaper, alternatives that might cost you less than £20? Well, I’m sorry to tell you that the cheaper polarising glasses bear no comparison and the polarising layer is simply printed on the outside of the lens, which is often quite a flimsy plastic one. Each time you clean them you wear away the coating and the polarising quality begins to deteriorate, especially if they get scuffed or scratched.

Whilst I was there someone had asked if new lenses could be fitted to an old pair of frames and sure enough they could, but what a performance. 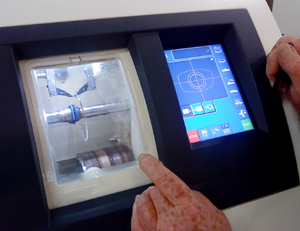 The old frames are measured on a computer controlled machine. The difference in internal circumference inside the lens mounting between the two eyes was almost a millimetre.

Normal lenses also begin life as a  circular disk but obviously they’re clear. Again the height of the sight plane is calculated, marked on the blanks, compared to a catalogue for reasons that escape me but I’m sure you’ll forgive my failure to grasp everything in one go. Then the computer driven grinder shapes the lens so it exactly fits the frame in practically no time at all.

It was amazing to watch the process and left me feeling a touch more respectful for those glasses that you see me throw on my coat during a link in the first Barbel Days And Ways DVD – oops!

Anyway, enough of this. I now know exactly why my specs are as good, if not better than, any others I could possibly buy. They’re certainly not the cheapest but at least I know why – that’ll do for me.

So, on to the promised playlist. I had a little more time on my hands to concoct this list and it contains one or two old favourites. In fact, Chris Ponsford mentioned Bachman Turner Overdrive in his comment on the last blog so who am I to disappoint him. Chris, You ain’t seen nothing yet…!

Do check out the Little Feat track – this is still one of my favourite tracks of all time. If you’re not familiar with the Sensational Alex Harvey band then you could be in for a shock and it would be rude not to share a touch of Garth Brooks. Frankie Miller still stand sout as the very best live act I’ve ever seen and the Groovies track is streets ahead of the Stones version.