Brian Searle stormed to victory in the Climax Tackle Sponsored Green Un Club Match Angler Championship on Monday (4th May) with a confident feeder fishing display. I’m proud to say that I’ve run this competition for the past 13 years now and it just gets bigger and better – keep up the good work you match secretaries! 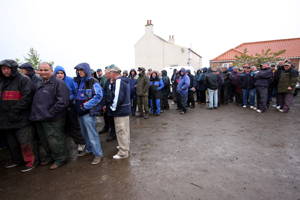 It Was A Damp Draw!

Heavy rain and blustery wind failed to put a dampener on a record turn-out at Lindholme Fisheries last even though the fishing proved to be much harder than anticipated. Almost 150 anglers braved the atrocious conditions in a bid to stake a place in the grand final on Sunday week, the 17th May at Wold View.

With payouts in this match topping £3,000 and another £5,000 up for grabs in the final it is easy to see why our Championship is so popular and it was terrific to see so many new faces. 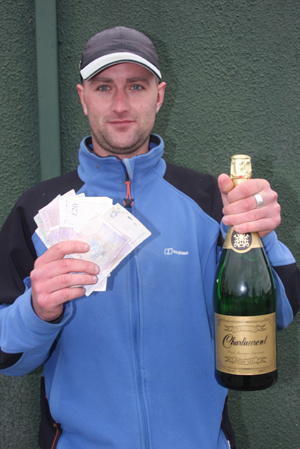 23-years-old Searle, who qualified with Ranmoor Piscatorials, stormed to victory. The Darnal based angler, who began fishing when he was just six and won his first club match as a nine-year-old, has his father and grandfather to thank for their coaching and inspiration and it’s a testament to their commitment to this competition that they switched the dates of a family holiday just in case one of them qualified for the final.

Drawn on Bonsai 40, Searle opted not to set up a pole due to the wind. Instead he fished a pellet feeder up to the point of an island using 6mm banded pellets on a size 18 B911 hook to a 4.6lb breaking strain hook link. It worked a treat as he caught carp to 3lb steadily throughout the match. 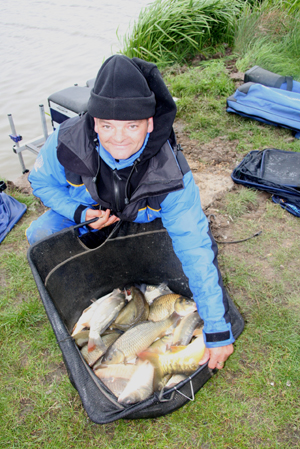 Runner-up Neil Owen paid dearly for a slow start. Opting to fish a method feeder he only managed to catch two carp but a switch to luncheon meat on the pole upped his catch rate, By the end of the match he was catching every put-in and had the match lasted another half hour he might have nicked a victory.

Last year’s winner Ian Ward made it safely through to the final, as did previous winners Paul Donnelly and Kevin Parkes.

The following anglers qualified for the £5,000 final on Sunday 17th May by winning their sections:

Where The Money Went

The total pools payout for the semi final was a staggering £3,120. Prizes were on offer for first and second in each of the four lakes used, top six overall plus twenty sections.

This broke down as follows:

The final will once again be fished at Wold View Fisheries, Claxby, near Market Rasen, on Sunday 17th May with the draw taking place at 8.30am. To make sure the anglers don’t get too complacent we’ve switched from the ‘Gold’ lake where we fished in recent finals to ‘Silver’ lake.

The lake is predominantly stocked with bream and roach, although a thousand carp were introduced quite recently. By all accounts the lake is fishing very well and three days have been allocated for anglers to practise on the venue should they wish but it is essential to book through the fishery manager in advance on 07742 220204.

Wold view has a web site containing full details of rules and directions for getting there. Click onto www.woldviewfisheries.com

Spectators are more than welcome to attend the final.

The Green Un Club Match Angler Championship is open to all clubs fishing in the Green Un newspaper circulation area – that’s Sheffield, Rotherham, Barnsley, Doncaster and Chesterfield. Entry costs nothing. There are few rules except the likes of Alan Scotthorne and Jamie Masson can take a hike (in the nicest possible way!). This is a competition aimed at genuine club match anglers and grass roots fishing clubs. Simply contact me through this web site if you’re a match organiser/ club secretary and would like more details and an electronic entry form.

The winner of every genuine club match that is reported in the Green Un Angling Column is automatically invited to compete in the semi-final, held annually on the first Monday (May Day Bank Holiday) in May. The twenty section winners from the semi final go through to the £5,000 final.