Those Were The Days

I’m guessing that I fished my first club match when I was 12, maybe thirteen. Toll Bar Angling Club was typical of hundreds of similar clubs in the north of England. Members tended to come from a fairly small geographical area, were fiercely loyal and funded fishing trips by coach to distant parts through a mixture of subscription and income from raffles.

The trips were great fun. Once a year we’d go away for a whole weekend to far flung places like the Thames, The Lower Great Ouse, The Severn, Scotland even. The rest of the time we would fish the Trent, Witham or Yorkshire rivers.

Juniors were encouraged, though it’s fair to say there would rarely be more than four out of the 30 to 40 anglers who could be described as either juveniles or novices.

Unlike much of today’s match fishing which rewards only the best, you were graded into four categories, team captains followed by levels two, three or four. A handicapping system, if you like. A draw then took place which allocated you to a team, just for that one match. The combined weight of your team was totalled and you would receive a small pick-up should your team finish in the top three.

Above all it meant you’d give full commitment, even to a bad draw, and everyone would weigh-in.

Club match fishing was never about winning loads of cash but they were great fun. Every bus had its characters and expert mickey takers who’s skills were honed and refined down the pit or on the shop floor.

You couldn’t pass a cemetery without someone confiding in us kids, “Do you know son, that there’s the dead centre of Lincoln.” or, “I’ve heard people are dying to get in there.”

Folk had great nicknames back then, too, like Bungalow (he’s got nowt upstairs) and Killer. We also took a pair of unusual characters with us in that they were deaf and dumb. I say dumb but one of them could utter a few sounds though it could barely be described as speech.

They were lovely old guys (everybody is old when you’re 13, aren’t they?) and always sat down the front of the bus on the left hand side. 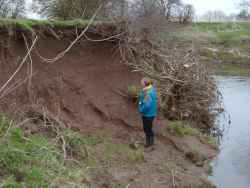 On this particular day we had travelled north, to the River Wharfe at Mucky Lane. Typically the Wharfe is a Yorkshire spate river whose banks suffer from slumping, in other words the banks are prone to vertical collapse. Over time the river carves a chasm through the countryside between soil cliffs that can be anything up to ten or even 15 feet high. The slump material forms the actual riverbank from which you fish and this is often quite narrow and precarious.

Whilst tackling up for the match I looked skywards to the top of the bank to be greeted by a comical sight. One of the dummies – because that is what we called them without a hint of malice in those simple pre-politically correct days – was dancing up and down, gesticulating in my direction and uttering a strange gurgling noise.

I was filled with a mixture of fear and trepidation. Had he gone mad? Had I inadvertently upset him in some way and he’d come to throw me in the river?

Fortunately, no sooner had he appeared than he was off again, heading in the general direction of the angler downstream.

“What’s up with you, you old barmpot?”

And away he went again.

Much puzzlement and shaking of heads followed his departure.

Eventually he reached his travelling partner and a quick exchange of sign language resolved the whole bizarre episode. While tackling up on the treacherous banks the ground had given way beneath him. He’d managed to save himself from a ducking but his wicker basket ended up in the river and was being swept away on the current.

By running ahead of the basket he was hoping someone could intercept it. Unfortunately all he had achieved was to divert everyone’s attention away from the water as his basket bobbed its way to the sea. Club match angling as we knew it declined after the miners’ strike. The rivers were fishing terribly, communities were broke and the cost of hiring a coach skyrocketed. Some soldiered on using cars but half the point of going on a club match was the fun you’d have on the bus.

Most managed to continue fishing during the strike thanks to legacy funds and non-mining members digging deep but that couldn’t be sustained.

One of the clubs I fished with was a miners welfare club and we had booked a match a little way above Gunthorpe Bridge. Half way through the match a gang of youngsters appeared on the far bank and it didn’t take them long to work out we were from Yorkshire as club matches were seldom quiet affairs.

“You from Yorkshire then?”

“Ah said, you from Yorkshire then?”

Game on, thought the kids and a hail of stones began flying in the sky. Of course the river here is probably 70 yards wide so they were never going to reach anyone.

By now the kids knew where we were from and with one voice they chimed up with that well known chant, “You can shove yer Arthur Scargill up yer ar*e, You can shove yer….”

Cue apoplexy on our bank, cursing, threats and feeders flying through the air but the kids knew we were impotent. No way could we get near them and I guess this was a regular weekend game of theirs.

Striking A Blow For Common Sense

As the strike ground on cracks began to appear. Good men were all but starved into submission and the first signs of weakness set in. A handful of miners eventually drifted back to work. This caused incalculable damage to close knit communities and fierce grudges remain even to this day.

The first Yorkshire miners to return to work were delivered to the pit gates by coach, the very coaches we normally used for our fishing trips. That company went straight on the black list and all future bookings cancelled with immediate effect. So another coach company had to be found.

Having been used to modern, comfortable coaches, the bus that turned up the following Saturday left us reeling. Talk about an old banger, this was practically a charabanc.

“We can’t go on that thing, surely? It’s a bloody antique!”

But we did. And we got most of the way home, too.

Bearing in mind this was the summer and a pretty hot one, too, no-one could quite understand why the heating was on.

But the bus just got hotter and hotter until we noticed smoke coming up through the floor.

And sure enough we were.

Well, the fire brigade managed to put it out and fortunately no-one’s tackle was damaged, but we had to wait an absolute age for a relief bus to come and pick us up.

A fortnight later I slept in and missed the bus by a matter of minutes, so I had no choice to drive down to the Trent on my own which wasn’t a cheap day out. Clearly I’d been winning too many matches that season because I was told that if I wanted to fish the match I’d not only have to pay my own petrol and my pools, I would have to pay the bus fare on top.

In the end it was worth it because I did win the match and to rub salt in an open wound the bus broke down again but by then I was already well ahead.

I caught the next bus though. For a change we were fishing above Nottingham which meant heading down the M1 rather than the A1. It was a scorching hot day and I won the match with a double figure net of chub that all came in the first hour. After that you could barely buy a bite for some reason.

By now folk didn’t have much confidence in the bus company and comments to the driver like, “Do you think you can get us home then?” or, “Where do you think we’ll break down this week?” were no longer funny.

And the inevitable happened. We scored a hat trick. This time the driver was able to drive up a slip road and off the motorway before juddering to a halt.

We trooped off the bus, forlorn and dejected. Across the valley we could see a black and white Tudor fronted building in the distance, maybe three quarters of a mile away.

“How long’s the other coach gonna be, driver?”

An hour drags by.

“How long’s it gonna be mate?”

No Mobiles In Those Days

“Dunno, I’ll go up the phone box and ring again.”

“They reckon at least another hour. They’re waiting for another bus to come back.”

“Only one way to find out.”

So we trooped off down the road to the building in the distance. The nearer we got the more it looked like a pub. A bit closer and we could see it was definitely a pub, the pace quickened. And then the cruelty of the whole escapade struck home. It was a Notts Miners WMC. Oh, the injustice.

Twenty thirsty blokes sat on a wall, all gazing at the front door.

Twenty minutes crawl by and the heat of the sun isn’t diminishing. Despite a determination not to enter the premises, no-one has gone back to the bus.

“Oh bugger it, I’m not playin’ silly buggers like this any longer!”

And in we trooped. One or two hung back saying, “Nay, this ain’t reight.” But eventually every one of us crossed the threshold and headed to the bar.

Fortunately the landlord served us because I can’t imagine the outcome, after all the deliberation, had he decided to bar these Yorkshire miners.