I was asked by Martin Salter if I might write a piece about the closed season for the Angling Trust web site. Of course I obliged. After all I hold firm views on the subject as anyone who has read my blogs will already appreciate. Here’s what I wrote… 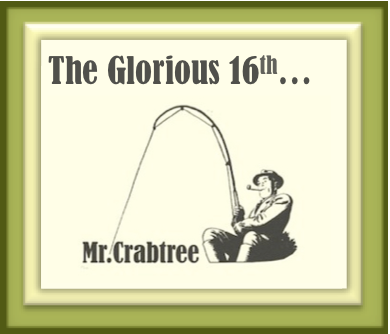 It’s that time of year again when folk like to make a lot of noise but ultimately do nothing. It will probably be just the same this year and in the closed seasons to come. Unfortunately talk’s cheap, especially on Internet angling forums. But this year we are told things are different. Some who were previously opposed to change have had a Road To Damascus moment and it’s making headlines. Big deal. Forgive my cynicism but I remain unconvinced that this will have any bearing whatsoever.

I’m pleased to be able to report that I haven’t changed my mind one iota. I remain utterly convinced that the current CLOSED season is a farce. Always has been, always will be. But before I explain why, please tell me which grammatically challenged imbecile decided it was a close season. A door is open or it is closed. It is never close unless you walk into it and then it is too close! The fishing season is open, or it is closed. End of argument. The fishing season is currently closed. It is the closed season. But should it be? That is the issue.

The ‘glorious’ 16th June is far from glorious in my book. Particularly now that most of the rivers I fish predominantly contain two species, chub and barbel. The days when I could catch a net of quality roach, dace and skimmers from almost any peg on the Trent, winter or summer, have long gone. It’s pretty much chub and barbel or bust these days and that means the very day so many traditionalists insist is glorious we find the species most likely to be caught are either gathering to spawn or have only recently spawned. Either way I’m personally less than happy to catch them in this condition and have packed up on more than one occasion because they’ve been spilling out milt or eggs after the closed season has ended.

To call this charade ‘glorious’ is an absolute joke. It’s a travesty and makes a mockery of what we’re supposedly trying to achieve. By all means have a closed season, but if the purpose of it is to protect spawning fish then let’s at least try and cover the main spawning period for those fish we are claim to be protecting.

I hear all sorts of lame excuses like dace spawn in February, though I’m tempted to ask, ‘What’s a dace?’ ‘Where might I catch one?’ Because they are rare creatures indeed. Indeed, tell me, when did you last see more than the occasional oddball using river tactics that are likely to catch dace in February, unless of course it was a pike angler out to catch some livebaits? And how does the current closed season protect dace or any of the other early spawning species for that matter. You may wish to consider pike and perch in this category.

Hang on a second, surely we’re not talking of catching a spawning fish that we then impale on treble hooks in order to target another spawning fish? And this will all take place in the conventional open season, so that’s okay.

It all seems a bit hypocritical if you ask me.

But here’s the dilemma. Anglers believe they’re conservationists and try to make out they’re doing things for all the right reasons in sustaining this antiquated legislation yet it doesn’t pay to look too closely at what they actually do in practise. Far too many go around talking the talk and preaching good theory to others but their own actions hardly stand up to even the most basic scrutiny.

An angler who happily impales a pound chub on a set of trebles so he can catch a nicely fattened up female pike on 14th March will always struggle to convince me I’m a heretic for wishing to catch and return that same chub unharmed on 15th March. Especially when it’s based on the grounds he’s a practising conservationist and I am so obviously not!

The thing is I’m committed to a closed season. I just don’t understand why it has to be 93 days long or indeed cover the current 93 days. Show me the science that supports retaining the status quo. There isn’t any.

The foundation of every argument put forward by traditionalists is undermined by this. The closed season is supported mostly because it happens to suit their lifestyle and mindset. Meanwhile they, like me, can perfectly understand and accept that we do have a different closed season for salmon, trout and coarse fish swimming in the very same river. Therefore I cannot understand why we require identical closed seasons for all coarse fish species. After all, the techniques, tackle and baits used to catch pike and barbel (for example) are completely different. You could never accuse a piker of deliberately setting out to catch a barbel with his pike gear or vice versa.

Unfortunately anglers are patronised from within and without. We are not perceived to be intelligent enough to do the right thing without complex rules and red tape. I recently stopped barbel fishing on June 16th after catching one on my very first cast that was clearly shedding. Everyone else on the stretch bar me carried on happily because it was such a ‘glorious’ chance to catch barbel again. Even if they were spawning!

Me? I’d shorten it and shift it. Be honest, what we have today might appear to be set in stone but that doesn’t deter cheats and other lowlifes from breaking the rules be they Johnny Foreigners or icons of the game. Even the occasional highly regarded traditionalist has let us down in the past by failing to practise what he has preached.

Let’s be perfectly clear, it’s not selfish to want to catch barbel and chub in late March. Nor is it detrimental to the fish. What is abhorrently selfish is making it out to be a big celebration when targeting gravid fish on the so-called glorious 16th June. That’s the joke. The Achilles heel of the entire debate. It’s in bad taste and the joke is on everyone who strives to abide by the rules.

The closed season was introduced in the Century before last by a non-angling politician at a time when fish were invariably taken away and eaten. Attitudes have changed. Even the climate is changing. Indeed the whole world has changed.

The closed season was introduced by the Rt Hon AJ Mundella when destitution was rife in his constituency, the city of Sheffield. In the same year the San Francisco telephone exchange served just 18 phones, electricity was first made available for household use, Karl Benz invented the 2-stroke gas engine, the first weekly weather report was introduced and the first gramophone was launched, London had no underground railways, whilst Orville and Wright’s first stuttering 120 feet flight was still a quarter of a Century away.

Maybe what was deemed relevant in 1878 deserves to be questioned in the 21st Century.

The annoying thing is, it’s a minority of individuals who are dogmatically clinging on to the past because it happens to suit them and they are hell bent on imposing their will on others. They uphold entrenched views based on no scientific evidence, no case studies, no measurements, nor anything they can physically substantiate. It’s merely a personal whim.

Those who want a closed season should obey one. Just stop demanding that we follow you like sheep. Meanwhile we, who it might surprise you actually have some integrity, should be allowed the right to fish on March 15th. I don’t want some hypocrite who deliberately sets out to catch gravid fish each year telling me what I should and should not do. Merely by the act of promoting the 16th June as a ‘glorious’ day in the calendar you have demonstrated your ignorance and ceded the moral high ground.

It’s time for change. Time for action. Talking isn’t going to change anything because words are cheap. It’s all well and good the Trust inviting folk like me to speak my mind. Who’s going to change the law? That’s what I want to know.

13 thoughts on “The Closed Season – A Personal View”