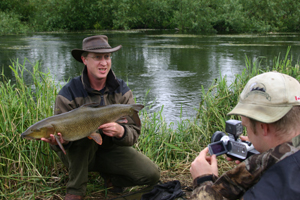 Read the inside story…
It’s barely a year since Stu (Walker) announced that he was going to film our sturgeon adventure. He’d bought a camcorder, read the instruction manual and was raring to go. We thought he was slightly mad. Surely you had to have some talent to make a movie?

The planning meeting went well, such as it was, as we sat in the departure lounge at Manchester Airport. Talk about winging it. By rights Stu’s film should have been a complete disaster, especially as two of the three parties who would be operating the camera had never used one before. But we need not have worried. Modern cameras are simply amazing.

When we got home Stu revealed a real talent for editing and the finished film, set to a pumping rock soundtrack is an absolute blast. We showcased it at a slideshow for the Rotherham PAC and the response was universally positive. Were it not for the musical copyright issues I’m sure we could have sold a boat load. 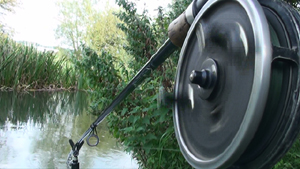 The magic moment when a fish takes

Buoyed by this success Stu and I began tossing ideas around for his next project, “We’ve got to make a film in India!” said Stu. But that was a year ahead. We needed something to get our teeth into before then.
I guess it was inevitable we’d turn our attention to barbel. During the winter we played around with ideas and practised our camera techniques and it slowly dawned on us that we might just be able to create something that was quite special. And then we simply got carried away.

Okay, I thought, not realising that this was the catalyst which would drive us forward.

A week later he’s back on the phone, “I’ve been down to the Went (a tiny river, well a stream, really) and shot some amazing underwater footage. I’m on my way round to show it you.”

Looking back this footage was pretty poor. The water was murky, the technique ropey, the focus all over the shop, but there on screen were a couple of dace and some minnows. Hardly groundbreaking stuff yet we were mesmerised. It was the inspiration we needed. Barbel – the movie was up and running.

If only we’d known then how much time and effort, how much blood, sweat and tears would be required to deliver a finished product that we were both happy with. It would prove an emotional journey demanding total commitment from everyone who got involved. 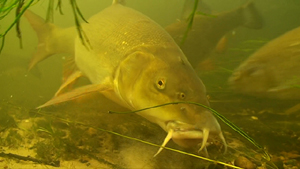 Few ever get this close…

It was soon clear that we needed a second camera. It’s all well and good filming underwater but you need one on land, too, if the images are going to fit together properly. So I raided the piggy bank. We also needed a blue tooth microphone, batteries, polarising filters and all manner of other gizmos. Then there’s the software and music licenses and it’s impossible to ignore the hike in fuel prices. Costs were spiralling but once we’d started there was nothing we could do but bite the bullet.

But all this was secondary. We needed to raise our game to technical and artistic levels that matched or bettered anything else on the market, or what was the point? The challenge facing us was could we do that?
It had always been my intention to retire from the day job this year and spend more time involved with fishing. This project gave me the impetus I needed. In went my notice, my first day as a truly free man in over forty years would be Monday June 16th. If only I knew then that I’d be working harder in my retirement than I ever did at work for a fraction of the income.

We were soon to learn that filming underwater is an act of faith. Without monitors all you can do is position your camera and hope. You can never be quite sure whether the camera is pointing at the sky, the river bed, or somewhere in between. You can’t account for weed and other debris wrapping around the lens. Can you fix the correct focal length? What’s the light like down there? Will the fish be alarmed by the camera? How do you get it in there without scaring the fish in the first place. What if someone turns up wanting to fish the swim? And so the questions go on.

Basically you set the camera, cross your fingers and hope. Several hours later you retrieve it, head home and download the footage to a computer. Then you have to watch the footage like a hawk because sometimes a fish might only be in front of the camera doing something you need to capture for a few seconds. It’s not unusual to invest two or three full days just to get ten seconds of useful footage. 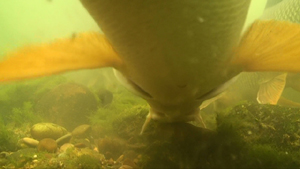 Feeding inches from the camers…

Despite the difficulties some of the footage we’ve captured is simply amazing. To watch barbel feeding within inches of the lens is captivating although getting one to take a hookbait on screen proved more difficult than we expected. Especially when our arch enemy Mr Chub nips in and insists on moving our carefully positioned bait to a point where the camera cannot see it. Or you set the focal distance wrong, or forget to switch the bloody thing on!

Then there’s the atmospheric shots, the sunrises, the sunsets, the cutaways and the wildlife. Believe me when I say that catching fish on camera is the easy bit. But the most difficult obstacle to overcome is the people who really don’t want you to film on their water. Despite every endeavour to hide the exact swims you are fishing in, despite not naming the stretches or the clubs, you still have folk trying to prevent you making the very movie these people will be so desperate to watch.

The crazy thing is, it soon became apparent that we couldn’t do justice to the project in one film. The initial plan to create a magazine format with ‘articles’, ten minute sequences on different rivers demonstrating different techniques, say six in each film, was impractical. Each sequence needed around 20 minutes to gel and get the message across. Even so, that meant four segments in each film. The goal we set ourselves was two films, so we needed to film on at least eight venues – all different. And if we shot our angles judiciously we could deliberately mask where we were fishing. But surely, if someone is cute enough to recognise an individual swim then they are already familiar with the stretch. I’d go so far as to suggest they are intimate with it and already members of the club.

You tell me, is it NIMBYism (not in my back yard) or sheer bloody jealousy?

So far we’ve shot sequences on the Trent, Dove, Idle, Swale and Kennet. We plan to do more on the Severn, Wye, Ribble, Wharfe, Don, Derwent and numerous others as and when time permits. Surely we can’t damage them all? Did Wilson, Hayes, Yates and James’ TV programmes wreck the whole nation’s fishing? Did the thousands of videos and DVDs made by OVC, Clean River and DHP create chaos? No!

But with some of the clubs, committees and particularly individuals we occasionally have to contend with, is there any wonder we see Robson Greene fishing on TV in exotic locations across the globe? Angling desperately needs people who can and are willing to promote the sport. It’s no good complaining we don’t get enough recognition in the media, that the BBC ignores us, that angling should be part of the school curriculum, if the first time anyone wants to do something positive we all shut up shop and say bugger off!

Looking back, we’ve been very lucky during the making of our first two films in so far as the fish have been quite obliging. You see we haven’t been going fishing hoping to catch a fish and then digging out the cameras as an afterthought, as some do. We’ve been going filming. When Stu and I have filmed together we’ve only carried one fishing rod between us which means one of us is permanently on camera duty.
Even rivers that some regard as difficult have proved obliging. Take the Swale, for instance.

Stu and I were up there to film the dawn long before we started fishing. When we did start it took Stu all of 3 minutes to catch a cracking barbel. Hang on, I tell a lie. He didn’t catch within ten minutes in his first swim choice so we moved. It was 3 minutes in the second swim and roughly the same in his third choice. After that they went barmy! 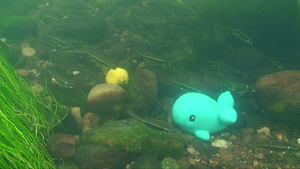 The footage we released to Sky TV’s Tight Lines programme stirred up a massive amount of interest on the Internet. Within days of appearing on the show, threads on the two most popular angling forums had attracted something like 13,000 hits and it worries me is that folk may be thinking we’ve made the barbel version of the Korda carp films which is simply not the case.

For the sleeve notes I wrote,

“How can you capture the magic of barbel fishing on a wild river, the smell of a summer’s dawn when mist lingers in the hollows, the simple peaceful serenity of it all? And what barbel angler hasn’t experienced that heightened sense of anticipation followed by the pure adrenaline rush, those heart-stopping moments we always get when the rod is almost wrenched from our grasp?

Is it possible to recreate that kind of experience in someone’s living room?

You be the judge.

It would have been easy to make a purely instructional film but does a car repair manual make you want to set your alarm for 3am to check your tyre pressures?” 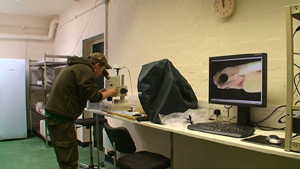 In the lab at Calveon 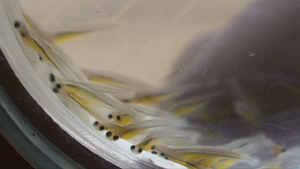 I’d love to say that we’ve created a new ‘Passion For Angling’ but that would be preposterous. There is no way we can compete with the expertise of a master film maker like Hugh Miles but by heck, we’ve given it our best shot and if this film doesn’t make you want to go fishing there’s something wrong with you.But we did manage to film sequences from the Rivers Dove, Swale and Trent. We also visit Calverton fish farm to learn more about barbel and we shared a session with Lee Swords, the mad, bad, chef from Sheffield. 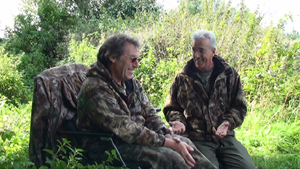 All the fishing sequences for Barbel Days And Ways, Volume Two, are in the can and edited. Steve Pope guests this time around and he certainly delivers the goods during a superb session on the River Kennet. We shall launch that one in April after which we’re probably going to reduce our output to one film per season because it is simply an enormous drain on time when you make films our way and Stu has a business to run.

In the future, who knows, we might include bonus discs of our foreign jaunts or perhaps a medley of underwater scenes and experiments. To be honest, we really don’t know, because this is a journey we’ve undertaken without a route map. When we started we didn’t know where we were or where we were going. We didn’t even know if we could learn the skills required to make a film but so far we’re doing okay.