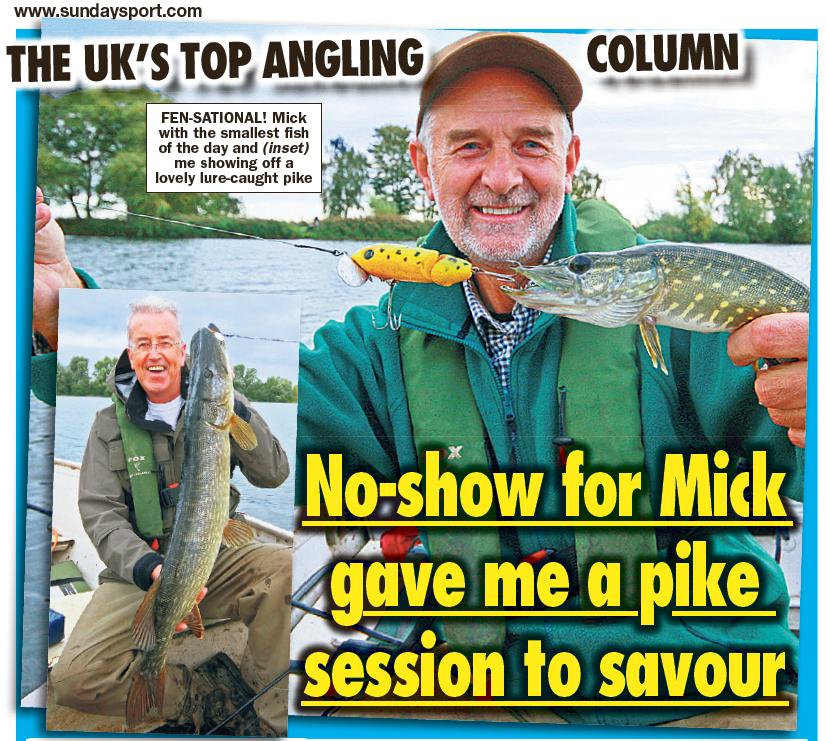 If you enjoy watching angling on TV then the name Mick Brown will need no introduction. Mick Brown was Matt Hayes’ sidekick in series like Wet Nets, The Great Rod Race, The Greater Rod Race and Record Breaking Fish. In some ways it’s a shame that he’s now known for being a face on the idiot box rather than for the fine all-round angler that he is.

I first met him at an Angling Awards Dinner around two decades ago shortly after he had been widowed and was struggling to squeeze fishing in between the responsibilities of raising two young children. Indeed he explains in his latest book (Professional Pike Angler – available from his web site: www.mickbrown.org) how this spurred him on to give up a job in engineering and develop a media business around his fishing.

Although we bumped into each other quite regularly at shows we never actually got around to fishing together until last week and even then it was by pure chance. I had arranged to meet up with Mick at the crack of dawn on the South Lincolnshire Fens to record a couple of lines of dialogue for my next DVD. It’s a long way to drive for a ten minute job but I was on a tight deadline and it had to be done and dusted early because Mick was due to spend the rest of the day guiding a client in the art of lure fishing.

Recording done and kettle on, I hung around for a while. After all, it’s always good to swap gossip and scandal from angling’s grapevine. An hour flew by and Mick’s client had still failed to show. That’s when he suggested if I wasn’t in too big a hurry we could take his boat out on the adjacent lake and throw a few lures around.

I needed little persuading and I always have a spare fishing coat and some boots in the back of my van so I was suited and booted in the blink of an eye.

I don’t really understand why more anglers don’t lure fish. In other parts of the world lure fishing is the most popular style of fishing. You need a minimal amount of tackle to get started – one rod, a reel, a wire trace, a small box of lures and a pair of forceps. Unlike most kinds of fishing you are active even if you are not catching because you are constantly casting and retrieving a lure. If you are fishing from the bank then you will have half a dozen casts in each swim and move on to the next so you will keep warm, even in the depths of winter.

In our case we were fishing from a boat, drifting with the wind. To slow us down Mick paid out a drogue in the water. It’s something like a small parachute that slows down your drift. The lake was very weedy so all the lures we chose were either surface or slow sinking types. Mick explained that as he’s a consultant to two of the biggest lure manufacturers in the world he literally has thousands of lures at his disposal yet he was apologising for the very basic selection he’d brought with him, ‘I try not to make things too complicated.’ He explained.

Nor did he need to. On Mick’s second cast of the day he hooked his first pike. Then I caught one. Then he caught one. And so it went on. We were catching pike at regular intervals and soon began to lose count of how many we’d had. This was social fishing at its very best. The fish weren’t big by pike standards, but they were fun to catch, especially when we switched to surface lures and the smash and grab takes could actually be seen as well as getting that electrifying jolt on the rod.

Several times we were playing small pike that were attacked by their much bigger brothers and sisters and I’m sure if we had anchored up to bait fish we would have had a chance of catching a bigger specimen but we both decided it would be more enjoyable if we kept active and simply enjoyed what was shaping up to be a great morning’s lure fishing.

Mick’s simple lure box contained maybe 20 different patterns ranging from lures that floated on the surface and made popping noises, small plugs, rubber shads, frog imitations and plain old spinners. We pretty much tried them all and caught fish on almost every one of them. I don’t think I’ve ever caught so many pike in such a short session and it was terrific fun in good company.

There was only one loser that day and it was the client who failed to show up. Amazingly he didn’t even have the courtesy to call and apologise. Well, I do hope he reads this column because every one of those fish that I caught would have been his, so his loss was definitely my gain.

A five lake complex originally created in the 18th Century on the outskirts of Leeds just minutes from junction 46 on the M1 offering a variety of waters to suit everyone from the pleasure angler to match and specialist carp anglers alike. The site has dedicated disabled access, on-site toilets with hot drinks and snacks readily available at the farm shop.