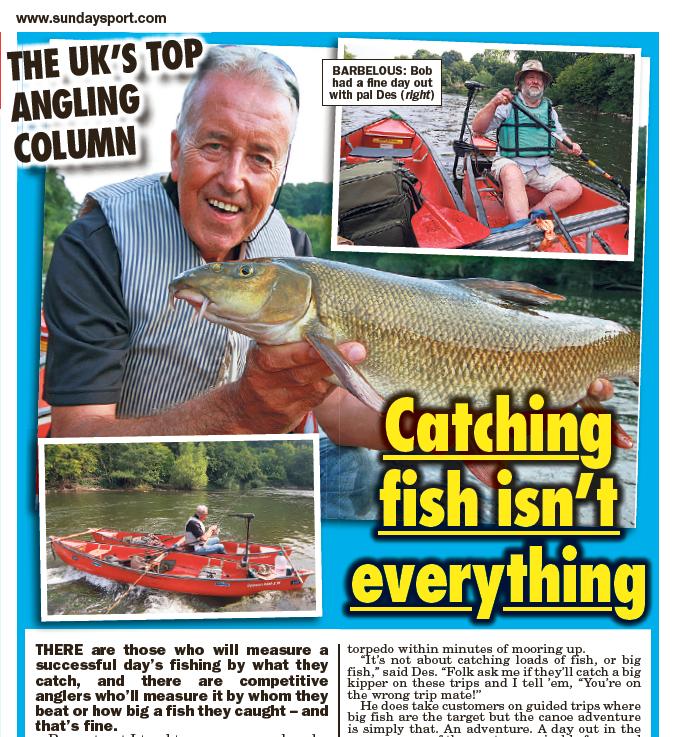 There are those who will measure a successful days fishing by what they catch. There are competitive anglers who’ll measure it by whom they beat or how big a fish they caught and that’s fine. By contrast I tend to measure my days by where I went, who I fished with and what I saw. What I actually catch is less important these days.

Last week I enjoyed one of the best fishing experiences of my life in the company of my old mate, Angling Times columnist Des Taylor. Des and I go back a long way and I’m glad I can’t remember how many times he’s got me drunk! He’s great company, a real character and a terrific angler to boot.

This summer he launched a guiding service with a twist on the River Severn near his home in Bewdley. ‘You’ve really got to come down and have a trip when you get a chance, Bob. It’s fabulous! Just give me a ring when you’re ready.’ So it was I rocked up at his house at 7.30am last week, Margaret made a brew and after a short catch-up we were on our way up the Severn Valley to rendezvous with our canoes.

Two canoes are strapped together to create a stable platform, Des in one and up to two guests in the other. There’s even an electric motor to make rowing through the quiet stretches less taxing. With all the gear safely stowed inboard we set of on our adventure and you know what, we were like kids again. Angling’s not meant to be a serious business but it’s rare to laugh as much as we did on a fishing trip.

The Severn is a spectacular river at the best of times but never is it more beautiful than from water level. Flanked by steep wooded hills, the sounds of the Severn Valley Railway are ever present. The track follows the river and although the steam trains are mostly hidden by the trees you’ll spot the smoke plumes and certainly hear them chugging and whistling.

After gently drifting downstream for ten minutes, Des pulled into his first spot. ‘We’ll catch barbel here!’ He said, confidently. And sure enough I was hooked into a bronze torpedo within ten minutes of mooring up. ‘It’s not about catching loads of fish, or big fish,’ Said Des. ‘Folk ask me if they’ll catch a big kipper on these trips and I tell ‘em, ‘You’re on the wrong trip mate!’’

He does take customers on guided trips where big fish are the target but the canoe adventure is simply that. An adventure. A day out in the company one of the most recognisable faces and biggest characters in angling; a chance to visit lots of swims, some that are completely inaccessible from the bank, to pick his brains and to see the river in a completely different light. And yes, you will catch fish as well.

With river levels at their lowest in a while a number of natural weirs become visible. In the canoes we were able to moor up on the lip and fish right into the hotspots. Des doesn’t normally fish on these trips but as this wasn’t a guiding trip he threw in a dropshot rod to see if he might catch a big perch.

Stepping out of the boat onto the exposed rocks of a weir to brew up his Kelly Kettle was a great idea. Stumbling and falling head first into the water wasn’t quite so smart! But we laughed so much about it. ‘You’d better stay out here till you dry off mate, or you’ll be in big trouble with your mam!’

Fortunately the sun was shining and this was developing into one of those days that live on in the memory.

Again I caught a couple of barbel in double quick time before we moved on. I’m sure we could have sat tight in one swim and caught far more fish but where’s the sense of adventure in that?

We spent nearly as much time observing wildlife as we did fishing and we were treated to a spectacular sight when a sparrow hawk swept across the river from right to left at high speed, narrowly missing my rod tip before crashing into a willow bush from which it emerged a few seconds later with a small bird firmly gripped in its talons. How cruel, some will think, but that’s nature as it’s intended to be I’m afraid.

More swims, more barbel. There were roach, chub and perch to be caught as well. Des had a pike but all too soon it was time to call it a day. Eight hours had flown by as it only does when you’re having fun.

Along the way we had bumped into a mixed bag of friendly scoundrels that Des knew well. Folk in a riverside chalet who plied us with beer and coffee, a couple of anglers cutting out new swims that we made a drink for and a fellow boater who kindly invited us to share his swim, not to mention the scattering of anglers who’s swims we gently drifted through and were only too happy to share news of their captures with us and enquire as to how we were getting on.

Take a wild river, throw in two canoes and the wild man of Bewdley himself. How can you fail to have an adventure? If you fancy a Canoe Adventure with Des then check out the details on his web site: www.destaylorangling.co.uk Overall it’s much cheaper than you might think, especially for two anglers sharing.

Fishery Of The Week – Bury Hill Fisheries, Near Dorking, Surrey

Set in a secluded scenic valley on a 200-year-old estate you’ll find four lakes offering superb sport. If it’s carp to 40lbs, genuine specimen crucian carp, pike to 30lbs or zander to double figures you’re looking for, not to mention the huge head of tench, bream, rudd, roach and perch and all within 20 miles of central London then Old Bury Hill is the place for you.