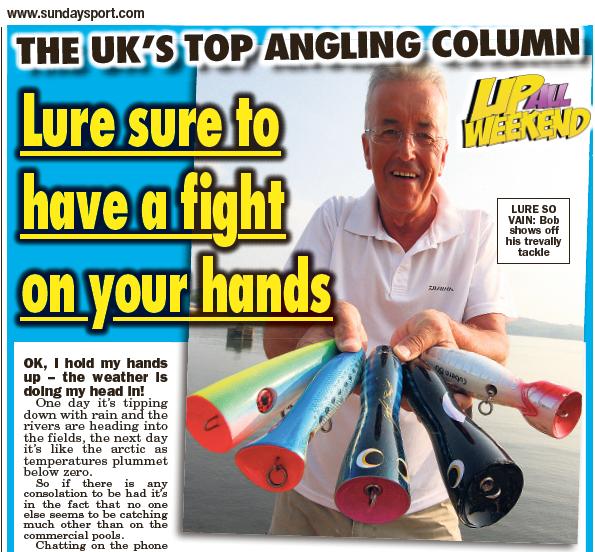 Dreaming Of Better Things To Come

Okay, I hold my hands up, the weather is doing my head in! One day it’s tipping down with rain and the rivers are heading into the fields, the next day it’s like the arctic as temperatures plummet below zero. If there’s any consolation to be had it’s in the fact that no one else seems to be catching much other than on the commercial pools.

Chatting on the phone with my dear old friend Archie Braddock this week brought home the reality of my situation. He lives close to the River Trent. Indeed he can be fishing within minutes of leaving his front door so there’s no-one better placed to make the most of the merest sign of improving conditions whereas I have to make a special effort and spend over 2 hours driving each time I turn out.

Archie reported that he had caught a grand total of 3 fish in ten trips. That’s a lot of blanking for a bloke who knows the river like the back of his hand, can draw on 60 years fishing experience and is extremely well accomplished at what he does. What chance the rest of us?

I made two trips to the river last week and had just one eel to show for my efforts. It came from my only bite. My companion on each of these sessions blanked, so don’t worry too much if you’re currently struggling to catch. Things are pretty grim for everyone.

I keep telling myself that what we need is a sustained spell of cold weather to lock up some moisture in the ground. When the river levels start to fall and the clarity improves then there will be chub aplenty to be caught because they’ll be hungry. Right now the temperatures are up and down like a fiddlers elbow and so are the river levels. Fish do not like it when the water is carrying so much fine sediment it looks the colour of milky tea, I suspect it irritates their gills and puts them right off the feed.

It doesn’t help that the clock is rapidly ticking down towards the end of the season, either. Just eight weeks remain and I’m going to miss two of those. That’s scary, but don’t be feeling too sorry for me. I’ve got plans in hand that will help me forget all about the grim weather here in Blighty. You see I’m heading off to Sri Lanka shortly in search of a specimen giant trevally.

Giant trevally are arguably, pound for pound, the hardest fighting fish on the planet. It’s like going into the ring against Mike Tyson in his prime and these boys fight just as dirty. Such is the strength in their jaws that they will snap a hardwood or resin lure in half. What’s so clever about that, you may ask? Well trevally don’t have teeth and the lures are thicker than a broom handle – plus they have a wire core!

To be honest I’m feeling a bit nervy about this trip. The gear I’m using is tried and tested. It’s as good as you can get and shouldn’t let me down. It’s just the chances are I might hook into a trevally that’s twice the size of any I’ve hooked before. Don’t laugh but my biggest fear is being pulled over the side of the boat!

The fishing is truly exciting. These huge lures are cast out and then retrieved in a series of powerful jerks. The idea is to make them pop, or should I say explode on the surface causing a plume of spray to erupt and make an audible splooshing noise which provokes an attack if there are trevally nearby. Fish hit the lures with astonishing speed. Sometimes you might catch a glimpse of a dorsal fin breaking surface as they chase the lure but mostly there’s just an almighty explosion of spray followed by an arm wrenching pull on the rod that’s violent enough to drag the rod from your hands if you’re not careful. And then the real work starts. It’s brutal and you simply have to hang on for dear life as every muscle and sinew in your body is put to the test.

This is all incredibly tiring stuff, especially when the sun is beating down from the clear blue skies above the Indian Ocean – and yes – I can sense I’m not generating a great deal of sympathy here! But it’s a job and someone has to do it.

Seriously, this is the epitome of sports fishing. Yes you can catch much bigger fish such as marlin and various other sail or billfish but that’s mostly done for you. The crew set the rigs, the skipper drives the boat whilst you sit around drinking beer and when a take occurs you are strapped into a chair that allows you to fight the fish with your legs.  If it looks like you’re struggling they’ll even use the boat to tire the fish for you.

With popping you cast your own lures, strike your own fish and you fight it stood up with no quarter given. They don’t call it GT racing for nothing! Stuart Walker and I published a film about GT fishing  on Youtube a while ago which has already achieved over one and a half million views worldwide. You might care to watch this and maybe some of our other adventure films by visiting: www.youtube.com/user/Stubarbel

Be warned though. It’s the kind of fishing that sets the adrenaline flowing and will probably cause you to hate me with a vengeance. Either that or you’ll be kicking the drinking, smoking or whatever other costly habits you have to start saving up for the trip of a lifetime. Personally I’ve never regretted the sacrifices involved.

Looking out to the famous Barnbrough Craggs and across the Dearne Valley it’s unlikely there’s another fishery in South Yorkshire with a finer location. Popular with match anglers because of its consistently even weights of mostly F1 carp the three pools offer great sport all year round. Just six miles north of Doncaster, within easy reach of Barnsley, Rotherham and Sheffield.