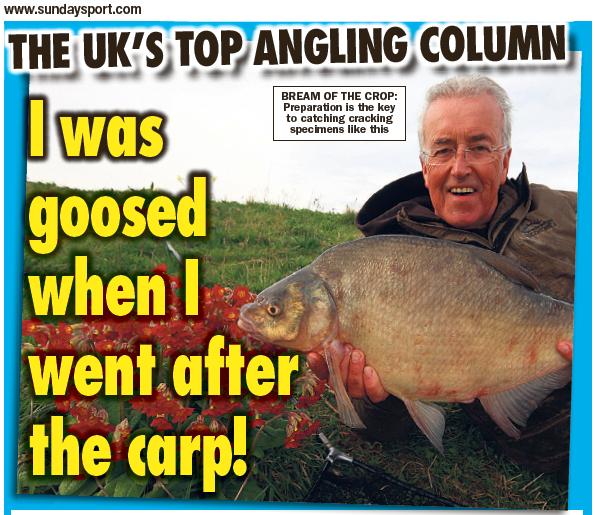 Away from the commercial fisheries where the high density of stocking levels pretty much guarantee good sport specialist anglers are finding the going a little tough. The past winter may have been rather wet but there’s no doubting how mild it’s been. Even here in Yorkshire we’ve had very few real frosts. I thought this would have led to bumper catches on stillwaters now we’re into springtime but I couldn’t be much further from the truth.

I’ve recently been targeting a large Trent Valley gravel pit in the hope of catching a few big bream but I’m failing miserably. Just two decent  ‘slabs’ have graced my net so far. The pit in question has a massive head of carp. They’re not big fish, just long, lean, almost ‘wildie’ strain commons that fight like stink. Normally they tend to get in the way and ruin my carefully laid bream traps but so far I’ve not connected with a single carp. It’s not like they’ve vanished in the floods, I regularly see them leaping clear of the water at ranges of 150 metres and more, crashing back into the water in a plume of spray, which is normally a sure sign they’re feeding although at that distance they can feed all day long and I won’t catch them because they are way out of my casting range.

On my last trip I did stumble across a group of 30 or more carp in a quiet corner of the pit after I’d packed away my gear and was driving towards the fishery exit. These fish had their backs were out of the water and they appeared to be gulping air. It seemed a rather odd way to behave but I’m guessing they were feeding on something so for a fleeting moment I thought I might be in with a chance of a bit of sport. Bearing in mind I had spent all day hoping not to catch carp because I was wearing my bream goggles it must sound like a contradiction to try and catch one but after a day of frustration it’s a hard man who’s going to turn down a bit of string pulling fun.

Pulling the van over and making sure not to slam any doors or make any disturbance I crept up on the fish which were barely 20 yards away and then, seemingly out of nowhere swooped a bunch of Canada geese that landed right on the fish’s heads before commencing to squabble and fight as only these noisy birds can do. The swirls and departing bow waves left me in no doubt these carp wouldn’t be back in a hurry. Talk about frustration on top of more frustration. It was game over and I simply had to accept that.

On the drive home I mulled over my lack of bites to conventional methods. It simply didn’t make sense so I phoned a friend, Mark Gregory, who’s an expert in fishery management to see if he could shed any light on the matter. Mark runs several very successful carp fisheries and he revealed that the fishing has been slow on many waters just lately. Apparently he’s witnessed some huge hatches of mayflies and the fish are completely obsessed with eating natural baits that the angler can neither collect nor replicate on the hook.

Although it’s a frustrating period to say the least, it really is only a matter of time before the fish switch on to anglers’ baits. When you think about it the fish have barely seen an angler in the past 6 months so they will need time to get accustomed to unnatural offerings like boilies, hemp and corn. When they do, I’m sure the upturn in action will be dramatic but for now it’s a case of being patient.

Meantime I have to develop a strategy that will swing the pendulum back in my favour. It’s clear that the bream are not showing their natural tendency to follow the wind. In warmer weather the number one way to catch bream is to sit with the wind in your face. Fish are not spread evenly around a gravel pit like currants in a scone. They tend to be shoaled up and most will be at the windward end of the pit. Right now they seem to be sitting in the deeper water and avoiding the shallower areas.

Obviously it makes sense to target this area and the best way to wean them off naturals is to create my own ‘hatch’. Small particles are ideal for this so I’ll be paying a visit to my local pet food store. Wheat, hemp, pidgeon seed conditioning mix, small trout pellets and similar foods are perfect. Just make sure if you decide to use seeds then they need soaking for 24 hours and boiling till they soften. To this I’ll add a label, a flavour that the fish can home in on. At this time of year any sweet, creamy flavouring is a good choice and the carp section of the local tackle shop will have dozens to choose from.

I’ll be putting a marker float out in my swim and then introduce a carpet of feed around the marker using a ‘spod’. They come in all shapes and sizes, again from the tackle shop. The idea is to create an area maybe 10 metres square that the bream can graze over when they decide to feed. Unlike pellets, seeds don’t dissolve so they’ll stay in the swim until the fish decide to feed, and they will, eventually. This way my bait is working for me even when I’m not by the lake. If I keep topping up the feed at intervals, say every third day in exactly the same spot, sooner or later I’ll end up catching a lot of fish.

Well, at least that’s the plan, for now. Fingers crossed it works.

Fishery Of The Week: