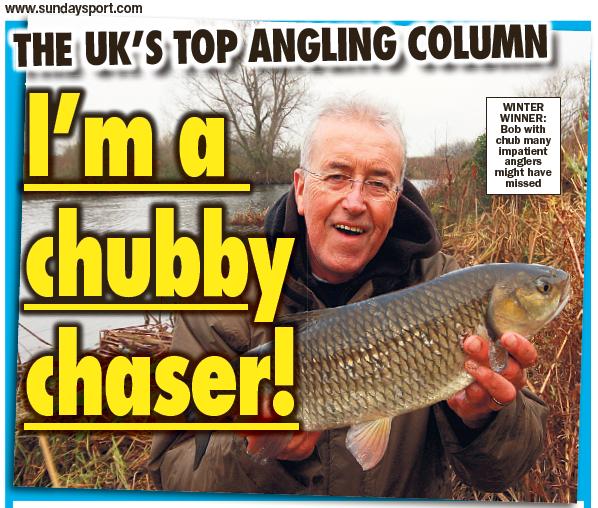 As the clock counts down towards January one fish species is guaranteed to get my juices flowing. Winter is chub time. They are in peak condition right now and are always willing to feed at some point during the coldest day even when the river is low and clear when hardly anything else is likely offer sport.

First and foremost you have to get your head around the fact that you will definitely get a chance if you fish intelligently and stick it out. So many anglers turn up, don’t get a bite for 4 hours and pack up grumbling that there are no fish in the river. Everything is about timing. Take the other day for instance.

I spent a day on the banks of the River Trent. It’s a popular stretch yet I had it all to myself. There wasn’t another angler on the bank. Why? I’m guessing that word had gone round that it was fishing poorly, the weather was cold and miserable, the wind was wrong, there was an ‘R’ in the month, you name it, fishermen will always find an excuse.

Did it bother me? Not in the slightest. It meant I could rove around and fish all the best looking swims on the whole stretch. I could have driven along the bank had I wished but I chose to park up at the downstream fishery limit and walk a mile upstream, picking out what I thought were the best looking pegs as I went.

I decided I’d walked far enough when I came across four pegs that looked really fishy. Each had overhanging cover from tree branches which we all know chub love to tuck under. I just knew I’d catch from here.

Using a cage swimfeeder I introduced a little liquidised bread into each swim and then allowed the disturbance to settle down before I systematically worked my way down the four swims.

Using a large piece of breadflake on a size 10 hook I was shocked not to catch anything from the first three swim choices. They were all on the near side of the river and looked so perfect. Dead easy fishing.

In swim number four I had a tricky cast over to the far bank but my first attempt landed bang on the money. The tip had hardly settled when it started jagging. Nothing I could strike at, just a sharp tug every few seconds. My first thought was this could be a roach or perhaps a dace. Then the tip dropped back a couple of inches and I lifted into the culprit. Not a difficult task a fish invariably hook themselves when you get a drop back bite.

Whatever it was felt solid. The fight was dogged rather than dramatic and for a while I suspected I’d hooked a bream but it was a chub alright. The biggest scare, as always, was when the fish came close to the near bank because chub have a nasty habit of diving into any vegetation they see and slipping the hook. There was every chance I might lose this fish so I was relieved to slip the landing net under it. Job done, time to calm down!

Despite this encouraging start it didn’t surprise me not to get another bite in the next 3 hours but I kept active, spending no more than 20 minutes or so in each promising looking swim as I worked my way back towards the car park. A second chub lifted my spirits but deep down I knew my best chances were still a little way off and would present themselves as dusk approached and sure enough things got a little crazy as mist began to gather in the hollows at twilight.

It’s all about light levels, you see, and suddenly a switch was thrown. The fish began to feed like they had starved themselves all day, which they had. In the space of an hour I netted no less than ten chub. It was manic. The river was alive with feeding fish but how many anglers would have packed up before the feeding spell began? How many would have loaded themselves down with so much gear they would not have wanted to keep changing swims? How many would simply have lost faith and made some disgruntled excuse about the fish not feeding?

Plenty, I’m guessing, and that’s why the car park was empty.

I knew that a frenzied last hour was likely, predictable almost. I also knew that because the fishery rules insist anglers leave the fishery an hour after sunset I needed to fish my way down the river so I was close to the car as the light faded and could fish right until the last possible minute.

For those who live ten minutes away from the river that’s not a problem. They are close enough to nip down for the last couple of hours of daylight knowing they stand every chance of catching. Those of us who face a hundred mile round trip need to make more of a day of it but sometimes that works in our favour because there are times when a feeding spell might take place in the morning, in the afternoon or for that matter any time. Occasionally you might catch fish all day long although these are the red letter days we dream about.

The only thing that is certain is you won’t catch anything sat at home by the fireside. The true winter angler accepts there will be tough days, days when you catch nothing, but stick at it and there will be days you’ll remember forever.

Roach have now moved into their winter quarters around the town of Thorne and no-one gives double figure nets a second glance. Match weights are nudging 20lb in just 5 hours so sport can be hectic. You can get bang up to the minute form details by calling into either of the two local tackle shops, Stainforth and District Angling Centre (01302 846623) or First For Fishing, Thorne (01405 818277). With day tickets at £3, year books only cost £10, this is bargain fishing of the highest quality.