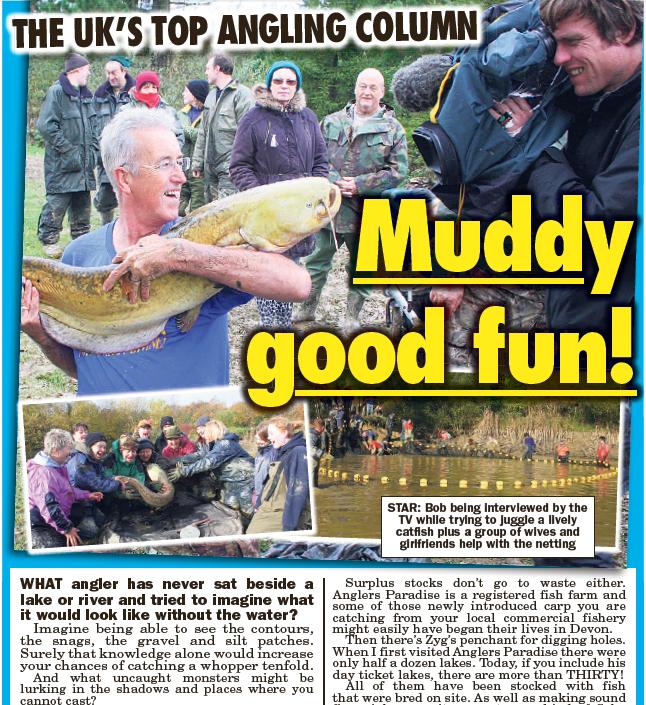 What angler has never sat beside a lake or river and tried to imagine what it would look like without the water? Imagine being able to see the contours, the snags, the gravel and silt patches. Surely that knowledge alone would increase your chances of catching a whopper tenfold. And what uncaught monsters might be lurking in the shadows and places where you cannot cast?

A passing dog walker or rambler looks at water and only sees somewhere he or she might fall into and get a soaking whereas an angler sees mystery. The reflective surface hides all manner of secrets. Be honest, how many of us would jump at the chance to see a lake drained, to see every fish it holds? To prove once and for all whether those tales of the one that got away are hogwash, or not maybe…

One fishery where this is actually possible is Anglers Paradise in Devon. Each November owner Zyg Gregorek organises a netting party as part of his ongoing fishery management programme. Devon is a degree or two warmer than most of the UK and that’s enough to send his sex mad fish stocks into a breeding frenzy each spring. The result is he soon finds himself with too many fish and without intervention his lakes would end up overcrowded with stunted fish.

The last thing he needs is to harm the excellent growth rates of those specimen carp, tench and golden orfe the fishery is famous for so he operates a fishery plan that involves draining and removing surplus stocks from designated lakes on a 5 to 7 year cycle. Each year he’ll decide which two lakes need managing. All the water is drained away, the fish are netted, sorted and temporarily relocated in stock ponds whilst heavy machinery moves in to de-silt the now empty lakes. The ‘new’ lake bed is fertilised, the water level restored and when things eventually settle down the bigger fish are safely returned.

Surplus stocks don’t go to waste either. Anglers Paradise is a registered fish farm and some of those newly introduced carp you are catching from your local commercial fishery might easily have began their lives in Devon.

Then there’s Zyg’s penchant for digging holes. When I first visited Anglers Paradise there were only half a dozen lakes. Today, if you include his day ticket lakes, there are more than THIRTY! All of them have been stocked with fish that were bred on site. As well as making sound financial sense it prevents any kind of fishy diseases being introduced.

All this adds up to common sense fishery management but the real clever stroke comes in the way Zyg has created a willing labour force. Can you believe he ropes in a few celebrities and gets his holiday makers to do most of the hard work? Can you also believe that his holiday complex is packed out for a netting week that takes place at the beginning of November when every other fishery in the country will be about as popular as the Mary Celeste? That has to be genius!!!

It’s not uncommon for 50 or more anglers, wives and children to turn out on a wet November morning to get completely plastered in mud and fish slime. You see, it’s a rare chance for folk to really let their hair down and do the kind of childish things we can never do in normal life. Grown-ups having mud fights, making mud slides, laughing, joking and indulging in a great physical work-out.

Most years one of the local TV companies will turn up to film the mud lark for broadcast during that evening’s news bulletin and I can honestly say that I’ve been interviewed more times on the BBC and ITV in the South West than by my local channels!

The netting usually lasts two mornings after which most folk go fishing, chill out or explore Devon. The rest of the week is their own. Even the netting part is optional.

Evenings in the bar can be pretty raucous, but there are loads of activities throughout the week centred around charity fund raising – raffles, Irish bingo, auctions, quiz night, Wii competition, archery competition, a fishing match, casting competition, curry night, you name it. All the monies raised go to local charities. To round off the week there’s a bonfire, fireworks and a treasure hunt.

And here’s the best bit. The villas are let out at a special rate so it’s a really great opportunity to enjoy some of the finest self-contained accommodation in the whole country at a bargain basement price. If you fancy getting down and dirty with the Anglers Paradise regulars there’s still time to book for 2013 (Indeed 2014 or whatever year you are reading this). Just give Zyg Gregorek a call on 01429 221559. The party starts on Saturday 2nd November and lasts all week.

The popular Cob House Academy gives juniors of all abilities a chance to learn to fish and develop angling skills with qualified coaches are on hand to guide youngsters into what can become a life-long pastime.

The Mayfly Cafe serves breakfasts in till 11.30am and offers a special breakfast and fish for just £9 on weekdays. Coarse fishing day tickets cost: Adults £7. Concessions £6.