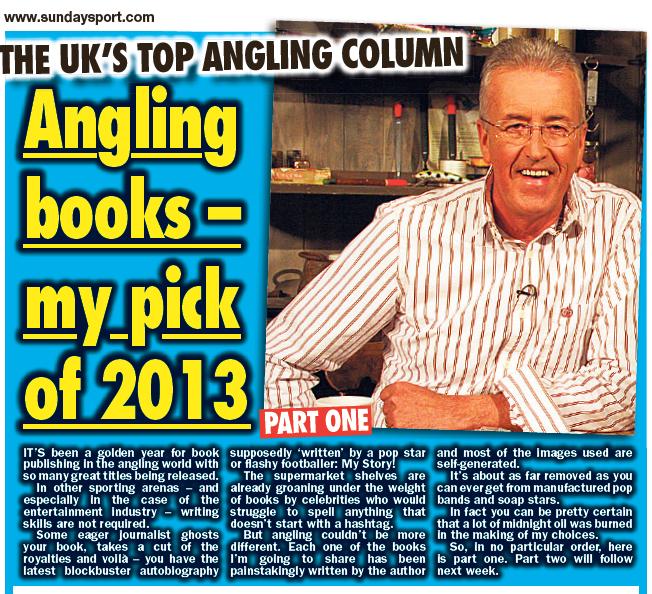 2013 has been a golden year for book publishing in the angling world with so many great titles being released. In other sporting arenas and especially in the entertainment industry, writing skills are not required. Some eager journalist ghosts your book, takes a cut of the royalties and voila, you have the latest blockbuster autobiography supposedly ‘written’ by a pop star or flashy footballer – My Story… The supermarket shelves are already groaning under the weight of books by celebrities who would struggle to spell anything that doesn’t start with a hashtag.

Angling couldn’t be more different. Each one of the books I’m going to share has been painstakingly written by the author. Most of the images used are self generated. It’s about as far removed as you can ever get from those books by manufactured pop band members and soap stars. In fact you can be pretty certain that a lot of midnight oil was burned in the making of the ones I’ve chosen to feature. So, in no particular order, here is part one. Part two will follow next week.

I’m surprised that neither of the angling weeklies has picked up on the Jack’s Pike cartoon series so far. Imagine Andy Capp as an obsessive fisherman. Jack and Bob (his mate) walking down the street. ‘That’s where the  Jehovah’s Witnesses live.’ Door bell rings. ‘Do you have a few minutes to talk about fishing?’

Or Jack’s take on One Million Years BC. The two main characters shelter under an archetypal Stonehenge structure, two upright slabs and a cross member, ‘This is a great fishing shelter… We should put them all round the pond.’ And there’s another great mystery solved.

You’ll find plenty more examples on the website www.pikeblog.com if you require further persuasion. There are three volumes of cartoons available in either B&W or colour to suit your preference and budget.

The Eel Angler by Barrie McConnell

Of all the books I’ve read this year this one took me by complete surprise. Surely it’s impossible to write an interesting book about a creature that’s covered in slime and looks like a snake. Be prepared to be proved wrong. From the moment I began reading I was hooked and the more I read the more I wanted to be out eel fishing. Be under no misapprehension, McConnell is an obsessive to the point where we might question his sanity. He lives a life that sounds insane because he’s eel mad but when did that actually hurt anyone else? Everyone knows the Scottish Highlands through summer are a mozzie nightmare even in the daytime but what would it take to persuade you to sit out all night long by the side of a Scottish loch just to catch an eel? His exploits in Australia and New Zealand are equally extreme – living rough in remote places becomes second nature but the results are staggering, think freshwater eels the size of a conger. Full of technical content and tactical ideas, if you only ever read one book about eels in your life it should be this one. It’s hard for me to say this because madness needs no encouragement but it was my best fishing read of the whole year.

I doubt any of us display less vanity than this author. Mole, as his friends call him, illustrates interactive children’s books of which more than ten million copies have been sold worldwide. His ornithological studies have sold at Sotherby’s, yet when I cheekily asked if I might use some of his fish images on my latest DVD inlays and to break up different film sequences he not only talked his agent into letting me use them at no cost, he then wrote to me saying he was humbled to be given such an opportunity. Crikey, if anyone should be humbled it was me. Of course, I jumped at a chance to repay the favour when asked to write an introduction for Water Colours. It was an honour and I knew it would be a cracker if his previous book, While My Float’s Still Cocked was anything to go by.

I wasn’t to be disappointed. Water Colours is a whimsical book. A collection of tales and Boy’s Own adventures, the polar extreme of obsession. It’s lovely, one to escape into on a cold winter’s evening. Not surprisingly it’s liberally illustrated with Mole’s sketches and paintings throughout.

Des Taylor is a bit of an angling legend with a reputation magnified through a long running weekly column in Angling Times which originally caricatured him as a hard drinking, opinionated loudmouth with a view on everything, but as editors have come and gone, so his image has been mellowed. These days he’s a countryman, keen to share his love of wildlife and nature. The youthful zeal has been replaced, he’s more thoughtful. However what has never changed has been his desire and ability to catch fish. He’s been prodigiously successful with coarse, sea or game fish. Throw in giant halibut, sailfish and great whites shark, not to mention adventure fishing in numerous countries, and you have a true all-rounder. If ever a book was overdue this one was but it is certainly worth the wait. Available in hardback but the real value is in the softback which contains 3 bonus chapters it is packed from cover to cover with some of his greatest exploits.

Very few instructional angling books can claim to be unique, completely different to anything else available. Even fewer provide any kind of factual evidence to support the author’s views. What we tend to get is a mix of dogma and supposition. Opinions are based merely on what the author imagines is happening beneath the surface or on what he’s read elsewhere, whereas Garner and Morgan set out to go with cameras and study the mechanics of every popular fishing method from a fish’s viewpoint. Seventeen chapters focus on stillwaters and 8 more on rivers. Conclusions are made, alternatives suggested. This is a book that could really make you think hard about your fishing.

Pike Here & There by Phil Wakeford

Wakeford is a highly respected pike angler and this book is no less than you might expect from someone of his stature, full-on, enthusiastic and leaves no stone unturned in a desire to achieve his goals. Many piker anglers grind out their results by pure attrition, not Wakeford, he’s a thinker and his results suggest others would benefit by adopting his approach, not that his campaigns lack physical effort. But he puts in the hours in an effective manner which works superbly well. Just check out the pictures, page after page of pike that anyone would be pleased to catch. Let him take you on a journey that winds around lowland rivers, backwaters and gravel pits to the wide expanses of Irish loughs and the vastness of the Baltic Sea. Only then will you appreciate what it takes to become one of the most successful pike anglers of all time.

For reviews and extracts from these and other angling books check out the books section of my web site: www.bobrobertsonline.co.uk

Whilst you’re there please do check out the trailers for my latest DVDs in the DVD section.