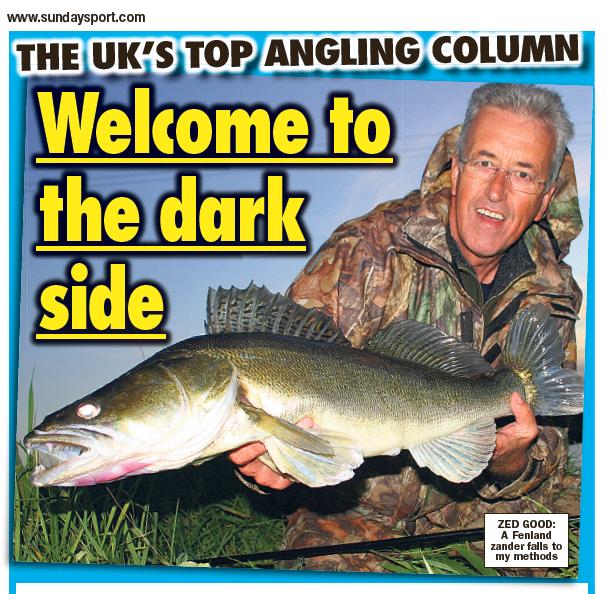 Welcome To The Dark Side

Halloween traditionally marks the end of the harvest season and the beginning of winter or the ‘darker half’ of the year. It is a night upon which supernatural beings are said to be abroad although luckily they can be intimidated or warded off by human wanderers.

All Hallows Eve to give the festival its correct name is when the souls of dead kin are beckoned to attend and a place set for them at the table. Well that’s okay for folk who believe in such superstitious nonsense but Halloween to me marks the perfect time to start my annual zander fishing campaign.

There is no better time to fish for this species than right now and Zed’s, as fans of the fang-toothed, cold staring eyed predator like to call them, are most active as the sun sets which is quite appropriate as they have an uncanny resemblance to Christopher Lee’s Count Dracula. Pity the poor prey fish when those piercing teeth are sunk into their flanks for there will be no escaping from a canibal that feasts as happily on the dead as the living.

Zander didn’t exist in the UK until 1878 when 24 were netted from Bothkamper Lake in Schleswig-Holstein, Germany, and transferred successfully to enclosed waters at Woburn Park, Bedfordshire. Further limited stockings took place but always into enclosed stillwaters where they could be contained although introductions to the Grand Union Canal and the River Ouzel were carried out around 1950 but the fish apparently perished and so the species was very limited in its distribution and remained that way until 1963 when 98 small fish were introduced to Norfolk’s Great Ouse Relief Channel.

The Channel was much to their liking and they bred rather successfully. Unfortunately it was only a matter of time before zander escaped the Relief Channel and rapidly began to colonise the extensive network of interconnected rivers and drains that criss-cross East Anglia. The speed these highly efficient predators reproduced and dispersed was dramatic, coinciding with a massive slump in silver fish numbers wherever they appeared. Not all anglers were happy about this but it was only a matter of time before fans of the zander began to spread the species far and wide with no thoughts for the impact they might have.

Today you can catch zander in the Thames, Trent, Severn, Warwickshire Avon and countless other rivers. They are found in ponds, lakes, drains, canals and even trout reservoirs. There is no turning the clock back and you either ignore their presence or you take advantage and fish for them.

How ironic then that the area which spawned the zander revolution, East Anglia has suffered terribly from poaching by Eastern European immigrants who provide cheap labour on the land but have taken thousands of zander for the table. After all, a zander does make a delicious meal.

Not as large as pike, zander tend to be shy and retiring in daylight although according to the French TV channel TV5Monde a couple of tourists were attacked by one in Lake Maggiore, Switzerland, in 2009 resulting in a number of cuts up to 10 centimetres long. The 70cm long fish weighing 8kg was later caught by the local police who cooked it and offered it to the tourists for the trouble it caused.

A likely story but in the run-up to Halloween who am I to cast aspersions!

Most of my zander fishing trips at this time of year coincide with the gathering dusk and I’ll invariably plan to fish a few hours into the dark – so easy when the clocks go back because I still get home at a reasonable hour. I like to present half of a freshly killed roach as bait. The cut section releases a scent trail that proves very attractive to zander and they will home in on it from a long way off. The fights aren’t spectacular though should you catch one you’ll be surprised by how rough the fish’s skin is. It has a sandpapery feel. You must also be aware of the spikes on the twin dorsal fins and particularly on the gill plates because they will easily cut your hands if you’re not careful.

Too many people still want to kill zander but the time for that has gone. They are far too widespread now and we cannot put the clock back so it’s best we accept them for what they are – another fish to target and a fresh challenge to meet. I’d say live and let live but when you look at those teeth you know at a glance it’s more a case of live and let die for the fish it preys on. Fortunately they do a very good job of mopping up anything that dies from natural or unnatural causes in our rivers.

With Halloween the theme this week and a target species synonymous with Fenland it seemed appropriate to feature Dents Farm Fishery in the very heart of the Fens if for no ther reason than it was the only fishery web site I could find wishing anglers a happy Halloween!

There are five lakes to choose from offering all the usual commercial water species with plenty of carp that run to decent sizes. Being a garden centre there’s a cafe and other facilities on site. The fishery lies just alongside theA10 on Steeles Drove, Hilgay, Downham Market, Norfolk. PE38 0QH