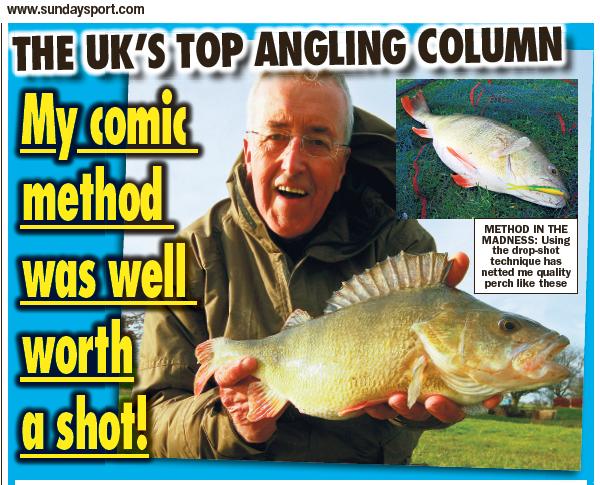 Were you ever a fan of American comics? I don’t mean Lenny Bruce and Robin Williams, I mean Superman, Batman, Spiderman, Wonderwoman and so on. In my youth DC and Marvel comics were all the rage and like all American magazines of that era they carried adverts for those ridiculous 500 piece fishing kits containing a tiny little rod and reel, line, hooks, shots and the most bizarre collection of rubber imitation baits imaginable.

Of course we laughed our socks off at them, didn’t we?. What kind of idiot would buy something so ridiculous? Not once did it ever cross my mind this kind of gear could actually work here in the UK. After all the Americans fished for bass, and walleye, and crappies and those species didn’t even exist over here.

When it came to predators we fished for pike and perch, indeed this was before the spread of zander, so our forays into lure fishing were quite rare. Lure fishing was something we might try as a last resort when we couldn’t catch on anything else.

Looking back even our lures were primitive. Mostly we used copper or silver spinners and spoons. Ondex and Mepps were the most popular and I can remember making plenty of spoons in my metalwork classes at school. Tackle shops did stock a few wooden plugs but they were quite expensive so in the main we stuck with what we knew and could afford. Even our friends in Europe were miles ahead of us but in those not so far off days before everyone had an Internet we simply hadn’t a clue what happened beyond the English Channel.

And then someone, somewhere in the UK, must have tried what works so well in the States and suddenly it’s threatening to develop into a craze – everyone is talking about drop shotting, and all I can say is why did it take us so long to catch on?  Drop shotting is a brilliant method and it uses exactly the same kit that was advertised all those years ago in my Superman comics. The species we target might be different but it works a treat. Indeed I’d go so far as to say it’s a method of fishing that all youngsters should be encourage to try because we know how easily kids get bored if they’re not catching fish.

With drop fishing kids don’t need to catch much because they are involved with doing something all the time. What’s more the technique is dead easy to master and needs very little in the way of kit. You don’t even need to invest in lures at first because it works a treat with worms and you get a lot of worms for a fiver. Far more than you might use in a month of Sundays.

The biggest investment is getting hold of a dedicated lightweight rod around 7 feet long. These tend to retail between £35 and £70 so they’re far from the most expensive rods around. Any small fixed spool reel loaded with braid or 8lb line will suffice and most anglers already have something suitable. All that’s needed then is a size 4 or 6 wide gape hook and some light weights for the end of the line. Split shots will suffice at a push.

Soft plastic lures are popular with drop shotters. These come in a variety shapes and colours, usually imitating natural creatures or small fish about 2 to 3 inches long. A whole selection of shads, minnows, crawlers, split tails and so on cost little more than the equivalent of a tub of worms. But let’s not race ahead.

Tie your hook on the line using a palomar knot so the hook stands off the line at 90 degrees. Leave a tail of around a foot to 18 inches long on which to attach your casting weight. About a quarter of an ounce is about right. Go a little heavier in deep or flowing water. Thread a worm onto the hook through its head or nick on a rubber lure. Cast out and allow the weight to sink to the bottom.

Now here comes the interesting bit. Carefully tighten up until you feel the weight and then very gently twitch the rod tip. The idea is not so much to retrieve the bait but to make it appear to swim. A worm will undulate in a way that big perch in particular find irresistible.

If a rubber lure is meant to imitate a small bait fish then the slower you can work it the better but a sharp twitch now and then can stimulate a hit. Concentration at all times is vital. Sometimes the bites are so gentle you will barely realise your bait has been taken.

If you feel a pluck or a series of gentle plucks don’t strike and don’t stop working the rod tip, give the fish time. Indeed striking isn’t really necessary. If you feel sure a fish has grabbed your bait just keep reeling and as the line tightens it will pull the hook home.

Best of all, nine times out of 10 your hook will lodge right in the corner of the fishes mouth so it’s a doddle to remove and return the fish safely.

This past winter drop shotting has developed into a bit of a craze. Lots of anglers have tried it and fallen under its spell. Lots more are keen to have a go and no wonder. It works on rivers, canals and stillwaters alike. Let’s face it, so many big perch have fallen to the method folk have had no choice but to sit up and take notice. It’s taken me 50 years to catch on to what was under my nose when I was a kid. I might be slow on the uptake but now I’m in the zone I’m making up for a lot of lost time and enjoying every minute. Give it a go!

At seventeen miles long and straight as an arrow, the Ancholme would never claim to be the prettiest river in England but when everywhere else is flooded this Scunthorpe & District Angling Association water is kept artificially low in winter through pumping and that means you can usually enjoy a cracking day’s roach sport. Use pole and maggot, pinkie, or bread punch when it’s clear and cold and good sport can be anticipated. Winter match weights often top 20lbs with double figure nets fairly common.