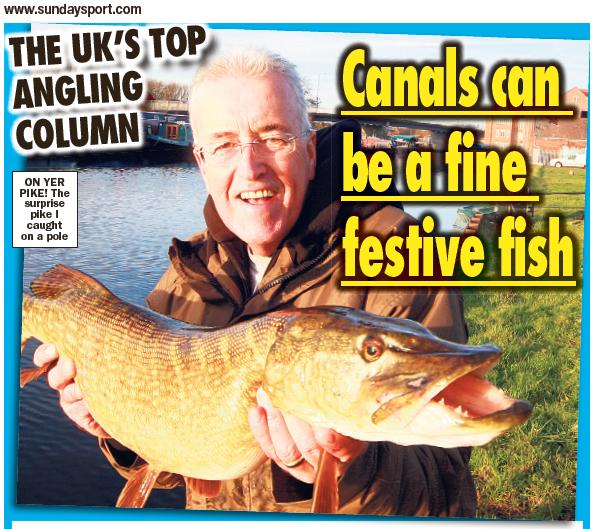 A Pike For Christmas

The latter end of the Christmas break is traditionally a busy time for fisheries. Anglers are suffering from early onset cabin fever, usually caused by being cooped up in the house surrounded by relatives they haven’t seen since the previous year not to mention indulging themselves in too much drink and rich foods. Most can’t wait to escape and wet a line. The choice is January sales or a bend in your rod? There’s no contest, is there? But where should you go and what is there to fish for? That’s the 64 thousand dollar question.

Time was when our riverbanks would be thronged with anglers happy to catch a few roach and dace, but cormorants have pretty much ruined that. The chance of landing a barbel is slim so river anglers have two realistic targets, chub or pike, but fluctuating river levels and water temperatures can make this something of a gamble.

In the past couple of days afternoon temperatures have reached double figures yet I’ve still had to scrape frost off the windscreen before setting out each morning. A football match in Stoke was halted because of hailstones and one in Sheffield was abandoned when the pitch became waterlogged due to heavy rain. On top of this we’ve been battered by gales, so is there any wonder the fishing is unpredictable?

Chance are the majority who venture out will head for a commercial stillwater and who can blame them? There’s usually a cafe onsite, you can park behind or close to most pegs and they’re sufficiently heavily stocked that there’s every chance you’ll catch whatever the weather. Let’s be honest, it’s a no-brainer.

But what if you are looking for a different challenge? Canals are hardly what you might call ‘natural’ fisheries but they’ve been around long enough to be regarded as such. After all, what constitutes a natural stillwater these days? Outside of the Lake District and a few shallow meres, what’s left? If you think about it, land drains, gravel pits, farm ponds, estate lakes, reservoirs, ballast pits, borrow pits and commercials are all manmade. There are few natural stillwaters. Most have been dug or created by damming streams.

But I digress. Canals can be an overlooked jewel. They criss-cross the country and the volume of boat traffic in summer makes them pretty much cormorant proof. Once winter sets in the boat traffic falls away and the fishing can be tricky but come Christmas enough jolly boaters and weekend sailors will hop aboard their barges and take them out for a spin. This activity along with the constant opening of locks and stirring up of the water is often enough to get the fish in a feeding frame of mind.

It does help to have some idea of the fishes winter haunts because species like roach tend to shoal up in colder weather, usually close to towns and moored boats. It’s not difficult to find out where these places are, just call in the nearest tackle shop to your chosen canal. Chances are the owner is a match angler and he’ll be organising a winter league of some description. When I drop into my local shop to pick up some bait I simply ask how the weekend match went, where the leading weights came from and what they caught on. It’s as simple as that.

The same information is vital to the smart pike angler. What do pike eat? Fish, of course. So where are you most likely to find pike? Wherever the prey fish are shoaling. It’s not rocket science, is it?

I enjoyed a day pole fishing on a local canal last week catching some nice roach on casters. I fished with an old mate, Trev Empson who works in the nearby Stainforth Angling Centre, but we couldn’t get the roach to settle and feed properly. ‘You can bet there’s a pike around.’ He said.

His prophesy proved ominous as shortly afterwards I was playing a roach when everything went solid. The pole tip took on a healthy bend before several yards of elastic shot out from the hollow tip. My fish had been snaffled by what was obviously a very large pike.

Usually when a pike snatches a fish the fine hook link gets cut on its teeth. Not this time. I’d been lucky and the hook, a tiny size 20, must have slipped out of the roach and lodged itself clear of the pike’s teeth. Unfortunately it was a hopelessly uneven contest and 20 minutes later, by which time I had followed it grudgingly 70 yards down the canal, the hook link parted.

Oh well, you can’t win them all.

Blow me, ten minutes later I had my first bite after the disturbance had subsided, hooked a roach and wallop, another pike snatched it! The whole process was starting over again. This was turning out to be my groundhog day. Would this be another 20 minutes wasted? Not likely.

Once again I had fluked a hook hold clear of the teeth but this pike was smaller so I was in with a chance. When I say ‘smaller’ I don’t mean a tiddler. The previous fish had been a proper crocodile! This one was maybe twelve or 14lbs and I’ll take those odds all day, even on a 1lb breaking strain line.

Sure enough, after a five minute struggle Trev was able to slip my inadequate net beneath the pike’s head and scoop it up. Congratulations followed, not just from Trev but from folk who live in the houses behind us, too. They seemed as chuffed as I was.

So, what’s it to be for you this Christmas? The river, a commercial fishery or that neglected canal? I know which one I’m plumping for and I’ll be hoping for a happy New Year!

Fancy a real challenge in stunning surroundings? How about targeting the prolific roach and pike stocks on a huge waterway that stretches over 4 miles. The fishing is predominantly from the west bank where a road runs the length of the lake although you can launch a boat from Peel Wyke harbour should you be a dedicated pike angler. Coarse day tickets cost £7 which is a bit steep when you can fish for salmon for just £2 more. Call the Blencathra Centre on 01768 779633 for more details.