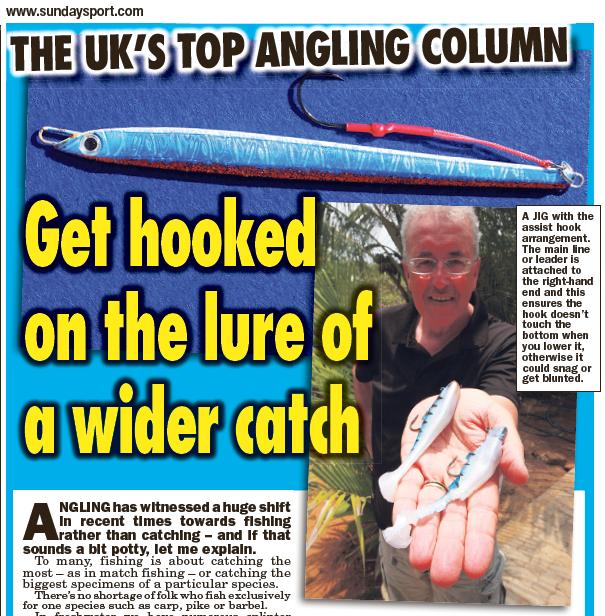 Angling has witnessed a huge shift in recent times towards fishing rather than catching and if that sounds a bit potty, let me explain. To many, fishing is about catching the most, as in match fishing, or catching the biggest in terms of what might be called specimens of a particular species, hence the number of one-species anglers around and it’s such a shame.

There’s no shortage of folk who fish exclusively for one species, be that carp, pike or barbel, for example. In freshwater we have numerous splinter groups, the Tench Fishers, Barbel Society, Zander Anglers Club, Perchfishers and so on. Yes, it furthers our understanding of individual species and the techniques involved in catching them but there’s a tendency towards developing a generation of one-dimensional clones who at best might be labelled one-trick ponies.

It’s a far cry from a few decades ago when anglers switched tactics and targets as the season progressed. They might fish for tench and carp in June, bream and barbel through July and August, roach in September, zander in October, pike in November, chub and dace in December, grayling in January, perch in February and once the closed season was upon us it would be a trip to the coast chasing dabs and codling. Many would pick up a cheap fly rod and take advantage of the put-and-take trout reservoirs, too.

Somehow we’ve lost this versatility and without any shadow of doubt it’s safe to point an accusatory finger at the carp, a species considered to be uncatchable by some leading experts as little as 50 years ago. Indeed, if you lived north of the Watford Gap you probably didn’t even fish in waters that held more than the odd carp. They were quite rare.

All this changed in the aftermath of Dick Walker’s exploits at Redmire and subsequently through Kevin Maddocks seminal Carp Fever book after which anglers clamoured to have them stocked in their waters.

Carp were never even on the match angler’s radar. The concept of heavily stocked waters containing carp, carp and even more carp was completely alien a couple of decades ago. Today the chances are if you fish for carp it’s a dedicated all-year round pursuit. What matches take place during the winter are invariably carp dominated. Without a shadow of doubt carp is a species with a lot to answer for.

But change is afoot. Lure fishing has never been more popular than it is today and it’s not only pike, perch and zander that are being targeted. All fish are predatory to some degree at certain times of year. Most big fish will top up their diet in springtime with a few fry. Indeed, ask any eel angler what’s the biggest drawback to fishing for eels in commercial stillwaters and they’ll tell you it’s carp eating their deadbaits. We now have dedicated lure anglers who use tiny lures to catch all manner of species and they are very good at it.

We’ve seen a massive explosion of interest in the technique of dropshotting which involves using tiny rubber lures to fool perch in particular and then there’s a the current fad for LRF or light rock fishing to give it its Sunday name. Light rock fishing can be done almost anywhere around our coastline, from the shore over broken ground or from rocks and cliffs.

Light rock fishing does exactly what it says on the tin. It’s fishing from rocks with light tackle. The lightness of the tackle will surprise many. Gossamer thin braided lines down to 6lbs breaking strain, short baitcasting rods and tiny flashy lures that imitate small fish. A friend of mine was telling me he’d rocked up on the Scottish coastline and plonked in between a row of serious guys using beachcasting gear. They caught exactly nothing while he pulled out over fifty fish, mostly small pollack of around half a pound each. Guess who was having most fun?

And that brings me back to my recent trip to Sri Lanka where rough seas made it almost impossible to target specimen trevally and tuna. Fortunately we’d each taken along a light Kenzaki Braid Specialist Boat Rod that balances with 12-20lb line and these really saved our bacon as we turned to a spot of light jigging. The lures are essentially just a flashy bit of steel with enough glint to provoke a hunting fish into snatching it but the smart thing is how you mount the assist hook which is not actually fastened to the lure and should always remain clear of the bottom to prevent snagging up. (see image)

The skipper positions the boat close to a reef and then drifts over it allowing you to lower the jig and work it close to the bottom by reeling and jerking the rod tip. Sounds daft until you get a hit and then it feels like a whole lot of fun because sea fish fight so much harder than their cousins in fresh water.

On shallow blue water reefs like the ones we fished over it’s rather like a lucky dip. You have no idea what’s going to hit the lure next and each of my first six fish were different species. That makes for fun fishing and plenty of these were capable of hooping the rod over and stripping braid from the reel.

I did take along some rubber lures that are popular with pike anglers here and these were without a shadow of doubt the most effective tool in our armoury because you don’t really have to impart any action, the rubber tail does that in the strong current so you are able to keep the lure down in the killing zone for much longer.

Unfortunately everything living on the reef has razor sharp teeth and you are lucky if a rubber lure lasts more than a few minutes before being literally ripped to shreds. Oh well, I had no choice but to switch back to using the metal lures and living with the drop in catch rate. Like I said from the off, it’s not just about catching, there’s a great deal of pleasure to be had from the fishing itself.

A commercial water where silver fish outnumber the carp can’t be bad, especially when the place is stuffed with chub to 5lbs. You’ll also find a fine head of roach with plenty of specimens topping a pound to be had in bags to 30lbs.